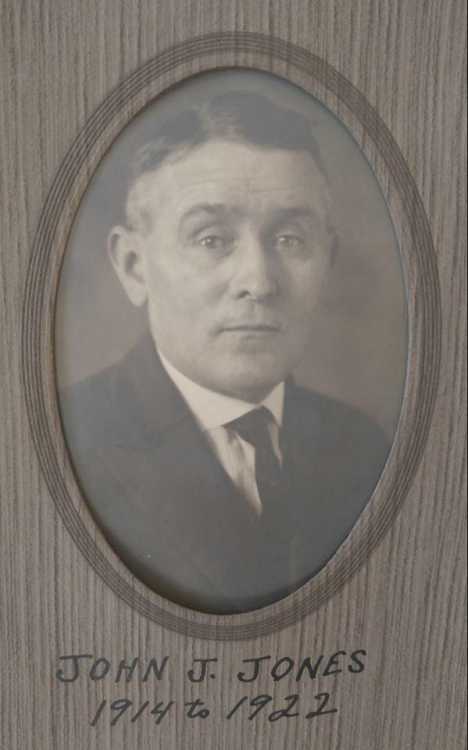 Mayor Jones was born at Salineville, Ohio, on May 22, 1874. He was known as “Jack.” His parents were natives of Wales.
When Mayor Jones was a boy, he held his own through circumstances that would discourage the ordinary youth. Some people said he was a “scrapper.” As a youngster fates were particularly unkind to him. When he was an infant, his mother was burned to death. His father brought him to Brazil when he was about two, and within less than two years, his father was killed by a fall in a mine, leaving him an orphan. He was taken into the family of Joseph Herbert; they adopted him and treated him as their son. He attended the common school until he was fourteen years of age; then he went to work in the coal mines. At the age of sixteen he started to learn the bricklayer’s trade and was a bricklayer that worked sometimes for wages and sometimes working on jobs as a contractor. He acquired a good education by reading and home study. By making his own way in life, he was forced to appreciate the economy and the value of a dollar.
When John J. Jones was a member of the council from the First Ward of the city of Brazil, he became known as the watch-dog of the treasury because of the watchful eye that he kept on the expenditures of the city. Even though his reputation served as a check on useless expenditures, many times he did not get his own way.
John J. Jones became the fifteenth mayor in January of 1914. Mayor Jones served two terms or a total of eight years as mayor. When he was elected mayor, he upset a precedent by knowing every day just what was going on in each department. He knew where every dollar was spent and before it was spent; he was pretty sure that the tax payers were sure to get a dollar’s worth.
During his years as mayor, he served through the World War I period. During this time, he took an active part in the Liberty Loan drives and Red Cross campaigns and headed the committee which officially welcomed the company of Belgian “Blue Devils,” who toured this country shortly after the United States entered the war against Germany. Even though prices were at an abnormal high level, he was able, with the cooperation and assistance of his department heads, to keep down expenses. Another accomplishment was when Mayor Jones, against opposition, suggested that the city buy the Staubitzer Woods for a city park, (now Forest Park). This was later considered to have been one of the best and wisest moves ever made by the city.
Mayor Jones had put in more actual time in the supervision of the affairs of the office than any mayor before him in Brazil. He retired with the inauguration of William M. Strobel in January 1922.
Submitted by Rhonda Tincher, Clay County Genealogy Society, Center Point, Indiana.
Sources: Clay County Genealogy “Family Files.”