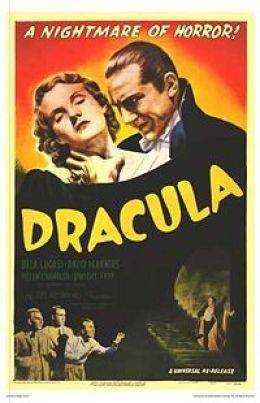 The original movie poster for one of my earliest film memories, Dracula (1932).

"I won't watch a movie prior to 1976," a fellow nameless co-worker stunned the staff here at The Brazil Times a few days ago with that pronouncement. "They're all terrible." When the audible gasp of disbelief faded away in the newsroom, the co-worker tried to defend the comment by stating actors of early cinema over acted (poorly mind you) and there's nothing good about watching a black and white film when you can watch something in color.

Although my fellow co-worker admits the 1946 black and white holiday classic, "It's A Wonderful Life" is worth watching, and, after some prodding, there are a few others they find of worth but it is difficult to recall the names. Trust me, I've asked to the point of being annoying!

Although everyone is entitled to an opinion, I have to admit pride when a younger staff member (24-years -old) defiantly said, "I'm offended by that remark. I grew up watching those movies with my family."

Now it's not the first time I've heard someone say something similar before, but I'm always fascinated that someone would limit their entertainment possibilities.

Maybe having a 9-inch black and white television in the room I shared with my sister as a child helped improve my appreciation of films. For the longest time, I thought only larger television played shows that were in color.

We were excited -- thought we were sitting pretty in the catbird seat among our friends -- when our parents brought home a game system that played PONG! It was great fun to yell at each other while playing the game and have our mother in turn yell at us to quiet down. Sorry, I digress.

I remember the day my grandparents brought home their first color television, which was trapped inside a big bulky imitation wood cabinet. They were filled with pride, although my grandfather still complained about how many shows were still being filmed in black and white.

She also loved any film (and television show) that Hitchcock made throughout his career.

Another memorable black and white film for me is "The Longest Day" (1962). I watched it with my father whenever it came on television. Even on a school night, he would let me stay up and watch "a piece of history" with him.

My grandfather, Papo Willis, always stopped to take the time to enjoy two of his favorite Jimmy Stewart films, "Harvey" (1950) and "Mr. Smith Goes To Washington" (1939). While watching Harvey he'd admit to seeing a few pink elephants from time to time with his drinks, and he truly believed our county needed a politician like Mr. Smith.

He loved comedies like The Marx Brothers' "Duck Soup (1933), and movies featuring the madcap comedy of The Dead End Kids, The Little Rascals and any of the comic antics of The Three Stooges.

My mother (along with my grandmother and her two sisters) loved musicals and romantic comedies. Although there are too many to list here, if it had Fred Astaire, Frank Sinatra, Gene Kelly, Cary Grant, Judy Garland, Doris Day or Debbie Reynolds singing or tapping their way through the film, they sat down with a glass of iced tea and watched.

As you know I have two children, and they grew up watching the classics of Hollywood with their father and me.

My 15-year-old son's favorite movie: The original 1954 Japanese film "Gojira," which he received for Christmas this year as his "annual Godzilla-fix" and has watched several times already.

Although only one person was unable mention a movie in the pre-1970s time frame -- the closest they came was the 1979 film "Breaking Away" -- I asked around to find out about my friends' and colleagues' favorite classic film choices.

Every movie they remembered, led to several other fondly remembered movies.

"They are so many fantastic movies," I would hear time and again from the people I would ask. "It's hard to pick just one."

The following list, which I hope serves as an entertainment guide for those looking for a good movie, is continuing to grow while I'm posting this Blog:

* The Good, The Bad and The Ugly (1966) and all spaghetti westerns, gangster movies and disaster films,

Every time I initiated a discussion about movies, people's faces would light up and they would talk for at least 15 minutes about why they liked their favorite movie, and then go on to mention dozens more that they liked.

I also asked people what they liked to eat while watching movies, and their answers were as vast and varied as their movie selections.

Over the next few weeks I plan on posting some of those snack suggestions and the recipes.

The first recipe, a very simple one, is from our family. During a Halloween Horror Movie Party several years ago, I made "Batwings In Pus."

It's just seasoned chicken wings baked in an oven until "crispy done," with a spicy mustard sauce poured over the top.

Mix one cup of Dijon or a really good grade of horseradish mustard with 1/4 cup pineapple juice a dash of salt, two tablespoons brown sugar, three tablespoons of olive oil and a teaspoon of crushed garlic until blended well, poured over the cooked chicken and bake another 15 minutes.

If you drizzle a little hot sauce or ketchup on top of the wings it now becomes "Batwings In Pus --With A Side Order Of Blood."

Might sound like a nasty recipe, however, it's great fun watching the looks on the faces of the children, and adults, when you tell them what "they are eating."

Now, here's the challenge to the readers:

Please leave the title of your favorite movie, why you like it and the snack food you like to eat while you watch movies.

Hopefully, for all those who don't think there's anything good to watch, maybe one of them might stop by here for a movie suggestion and a new comfort food to enjoy while they "veg out" in front of the television.

More from this blogger · Ivy Jacobs
Comments
View 16 comments
Note: The nature of the Internet makes it impractical for our staff to review every comment. Please note that those who post comments on this website may do so using a screen name, which may or may not reflect a website user's actual name. Readers should be careful not to assign comments to real people who may have names similar to screen names. Refrain from obscenity in your comments, and to keep discussions civil, don't say anything in a way your grandmother would be ashamed to read.
Respond to this blog