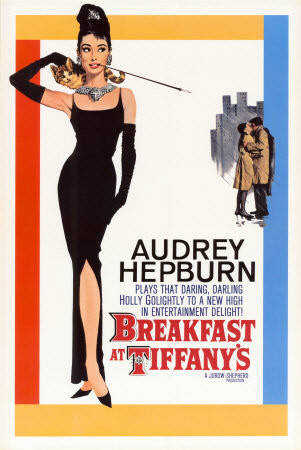 I recently met a young woman named Ruth who told me about how a classic movie helped create a special bond with her mother.

The 1961 classic movie, "Breakfast at Tiffany's," was her mother's favorite movie and she wanted to not only share it with Ruth, but she also wanted to use it as a way to open lines of communication with her daughter about life's tragedies.

The movie's main character, Holly Golightly, is an eccentric, neurotic party-girl/ socialite caught up in some seedy situations with some less than good role models.

"We would talk about how someone could get into a bad situation by being naive," Ruth told me. Although watching the same movie on Saturday mornings became redundant, Ruth said the morning movie time with her mother branched off into the pair sharing breakfast goodies and time watching many wonderful family films that sparked not only life conversations, but conversations about their lives.

As for a recipe to share with readers, I thought I'd honor my favorite scene from the movie, the introduction of the character Holly. When we first meet her, Holly is eating a breakfast roll and drinking coffee while admiring the window displays on the way home.

There are times when you just want to waste the day away leisurely cooking in the kitchen, filling the house with incredible aromas. But, at least in my house, Saturday isn't one of those days.

The following is a quick and easy way to make some tasty breakfast rolls.

Preheat your oven to 350 degrees while preparing the rolls for baking.

Using an eight-count container of Grands Flaky Biscuits, separate the biscuits and place them on a lightly floured surface and rolling them until about twice their original size. Peel, core and cut your favorite type of baking apple into eight wedges.

Place one wedge on each biscuit (in center for pouches or off to a side for a roll) and then sprinkle with half of the cinnamon/sugar/nut mixture. (You can divide a single serve box of raisins among the rolls for added flavor and nutrition.)

Pull up the edges of the biscuits to make little pouches or roll in half and pinch the edges. Arrange the rolls on a lightly sprayed cookie sheet. Drizzle with the remaining butter and then sprinkle with the left over cinnamon/sugar/nut mixture.

Bake for 30-40 minutes, or until golden brown and apple wedges are tender.

For a another layer of sweet and some added decoration, try letting your inner creativity loose by using icing to decorate the top of the warm rolls.

In a small bowl or cup, stir together one cup of sifted powdered sugar and one-two tablespoons of lemon/lime/orange juice (or vanilla extract) until a smooth consistency. Use a large serving spoon, or pour it into a small zip-lock bag with the tip cut off, to drizzle the icing over the top in swirling or crossing patterns over the top of the rolls.