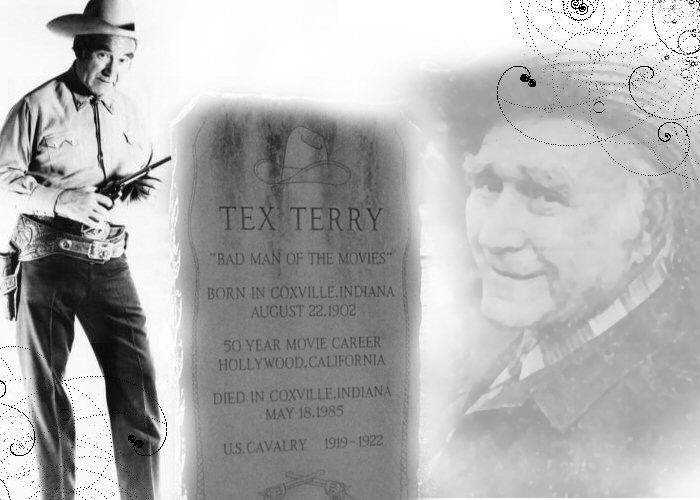 A photo tribute to Tex Terry (digitally created by my daughter) that shows the B-western "bad guy" in his Hollywood heyday and the way our family remembers him along with a picture of his tombstone in Coxville.

When you think about Hollywood movie classics, do you remember one of the most famous "bad men" of the early B-western movies and the legendary television westerns? Did you know he was born and grew up right here in Indiana?

After his retirement from acting, many area school children in the late 1970s to the early 1980s sat in amazement as he performed with whip and ropes while telling about his 50 years in Hollywood films.

I remember, as I'm sure my sister does too, sitting in the bleachers at Van Buren Elementary listening to our fellow classmates go on about how cool he was and watch them beg and plead to be chosen when he asked for volunteers to have something snapped out of their hands by using one of his whips.

We would sit there and quietly watch as they surrounded him for autographs and to sneak a peek or ask for a shot at using the whips. They wanted to go outside and see the famous Cadillac with the Longhorns attached to the front and back and the silver pistols mounted on it. (If my memory serves me right, I believe he bought his wife a pink one with real Longhorn hide seat covers!)

Although he'd start the show wearing his famous trademark black hat, the show always ended with him wearing a broad rimmed white hat and a huge smile.

"Tex" Terry didn't want there to be any possibility that his persona would frighten any child. In all honesty, in real-life the movie "bad man" was a real softy.

For me, I loved the wink and a nod he would send in my direction after the show.

I'm not sure about my sister, because our convocations were usually at separate times, but I waited for the crowd to clear out before going over to talk with him.

"Hello baby girl," our godfather would say before giving me a big bear hug. "How'd I do?"

I don't remember a time when my family didn't know Tex Terry and his beautiful wife Isabel, or "Izzy" to those who met her at least once. They moved from Hollywood to Mansfield, Ind., in 1972. I think it was sometime before my sister was born (sorry to give away your secret, but you know I think you're beautiful at any age), but I could be wrong. Hey, I was only 8-years-old.

I met them in the golden years of their lives, post Hollywood.

My first impression of Tex was that he stepped out of the past. He wasn't a Hollywood star. To me he was living in the wrong time and place. I not only believed his stories but I could envision him astride a horse as part of the United States Calvary (active service from 1919-1922).

He was a tall, burly cowboy with a tint of red in his hair and a never-ending smile. When he drew me into his large arms, I always felt smaller than I really was, but at the same time very important.

As for Izzy, she was a little imposing for me. The chain from her horn-rimmed glasses sitting on top of her faded, almost pink, bouffant hairstyle hung around her neck like a cranky schoolteacher I knew, and feared. When admitting that she once was a teacher, I admit to being standoffish.

Izzy being a Hollywood talent agent -- the one that discovered the iconic James Dean -- didn't impress me much. (If she would have mentioned knowing Buddy Ebsen from the television show "The Beverly Hillbillies," that would have got my attention!) But when she sat at the kitchen table helping me do my homework, she was amazing.

For some unknown reason, according to my teachers, I wasn't able to hold a pencil the correct way when writing.

"It's all right sweetie," she said patiently while tapping my hand. "You love to draw don't you? Just think that you're drawing the letters and numbers."

Izzy's the reason I have legible handwriting and her encouragement enabled my creative side.

I never knew they had only been married for a few years (1964), and I don't think anyone else did. They were magic when they were together and truly missed each other when they were apart. There wasn't a moment or a place when they weren't able to give each other a peck on the check or a squeeze of the hand.

Born as Edward Earl Terry in Coxville, Ind., on Aug. 22, 1902, Tex mastered his whip and roping skills at a young age while working with mule teams in nearby coalmines. When he went to Hollywood in the 1930s, the skills came in handy for helping to create the character roles he loved to play and perform the stunts he was famous for.

"There wasn't a fake mountain or wall I didn't fall off of or fall through," he'd laugh and tell people who asked about his acting career. "I also took a lot of punches an got shot a lot."

In his later years, there was a slight wobble when Tex walked. He would laugh and say it was a reminder of being knocked over cliffs, into furniture and thrown off buildings more times than he cared to remember but loved to talk about.

His early film appearances were often unaccredited, but his unique appearance made him easy to spot.

"It was my big eyebrows," he explained while twisting the scruffy hairs at the end of his bushy red and white eyebrows. "They made me a natural villain, so I was always the bad guy."

Tex never wanted the spotlight because there was more money to be had as a character actor in the early days of Hollywood movies and later in television shows.

Appearing along side such acting legends as Fred McMurray, Douglas Fairbanks, Alan Ladd, Sunset Carson, Gene Autry, Roy Rogers and John Wayne, Tex made his last appearance in a movie role in the 1972 film "The Strangers," with David Brian.

Shortly afterwards, Tex and Isabel returned to Indiana with the dream of turning Mansfield into a "western city." My father proudly owns film footage of staged shoot-outs and bad men being jailed in the town square. Although the idea never took off, many of the buildings in the town remain for visitors of the Covered Bridge Festival to tour.

The Terry's next project involved moving to his childhood home (Coxville, Ind.) and opening "Tex's Longhorn Tavern" in 1979.

All of Tex and Izzy's memorabilia came out of storage and was made available for the public to see inside the rustic cowboy-style bar and diner. My sister had the privilege of putting the last penny in place in the bar-top.

Every year for his birthday celebration, Tex and Izzy invited everyone from miles around, young and old alike, to come and celebrate the occasion by listening to their Hollywood stories, watching his old movies and seeing Tex in action.

Food, fun and laughs were everywhere.

I can still remember him cracking the whip with his best snarl and then watching his face light up when he would see our family arrive and he'd call out, "Bring me my baby girls!"

On the afternoon of May 18, 1985, Tex died from a heart attack at his home only a few yards from the tavern. In appropriate western style, the old cowboy bad man was laid to rest up on a hill in the Coxville cemetery. Izzy, who was heart-broken at the loss of her husband but too spirited to admit it, joined him there April 1, 2002.

One of my fondest memories is how my father always found really weird socks to make Tex a stocking to hang by his fireplace. The running joke was my father would always cut a hole in the toe and fill it up with bananas (and a couple of oranges) leaving one sticking out of the toe.

Tex loved bananas, and he would always eat them first, leaving a hole for anything else stuffed in the sock to fall out so he could get more gifts.

My father would always tease Izzy and prompt her to make a banana cream pie out of his gift for Tex, but she would quip back, "I might have been a mover and a shaker once, and I've left that life behind for a quiet home life, but that doesn't make me a baker now."

However, she was being modest about her culinary prowess.

In honor of them both, I thought I'd share a recipe for homemade banana cream pie.

In a saucepan, combine 3/4-cups of sugar, 1/3-cup of flour and a 1/4-teaspoon salt. Gradually add into the dry mix one and two thirds cup of milk and a third of a cup of orange juice while stirring gently until completely mixed. If you don't like the idea of the juice in your pie, use two cups of whole milk instead.

Place pan on medium heat, stirring constantly, until the mixture is bubbly. Continue cooking about two-three more minutes, and then remove from the burner into a pan of warm water to let cool, yet still keep it warm, during the next stage of cooking. Let the mixture sit about five minutes.

Separate three eggs, (you can save the whites to prepare egg whites for on top of pie, but I admit I'm not very good at that), and then beat the egg yolks in a small bowl. Stir a small quantity of the warm/cooled mixture into the beaten egg yolks (stir quickly because you don't want scrambled eggs), immediately add it to the remaining egg yolk mixture and then stir all of it into the rest of the warm mixture (stirring quickly).

Return the pan to the stovetop to cook for two more minutes; remember to keep stirring. Remove the pan from the stove, and add two tablespoons of REAL butter and one and a quarter teaspoons of real vanilla (stirring quickly, did I mention you would get a good aerobic workout while making this recipe?).

Keep stirring until the mixture has a velvety smooth consistency of pudding. Sit aside so it can cool.

Now I cheat a little by purchasing a pre-made piecrust at the store, and you can use a graham cracker crust if you want to, but try placing the pie plate in a water bath before baking to prevent burning the crust. But if you're in the mood to spend the time making a piecrust, go ahead it is really worth it.

(There are traditionalists who won't do this, but we smash half a banana and then add it to the filling at this point. You don't have to, but we like the texture and additional taste.)

Slice four bananas (three and a half if you add to the pudding) into the cooled baked pastry shell. Top with pudding mixture.

Bake in a 350 degrees oven for 12-15 minutes. Remove from oven and let stand for 15 minutes before placing in the refrigerator to chill for an hour before serving.

If you're like me and can't do the egg whites, then purchase or make your own whipped topping to cover the top of the pie with a sprinkle of cinnamon and more banana slices, nuts and/or vanilla or graham cookies.

To learn more about Tex and Izzy Terry, log onto www.texterry.com.