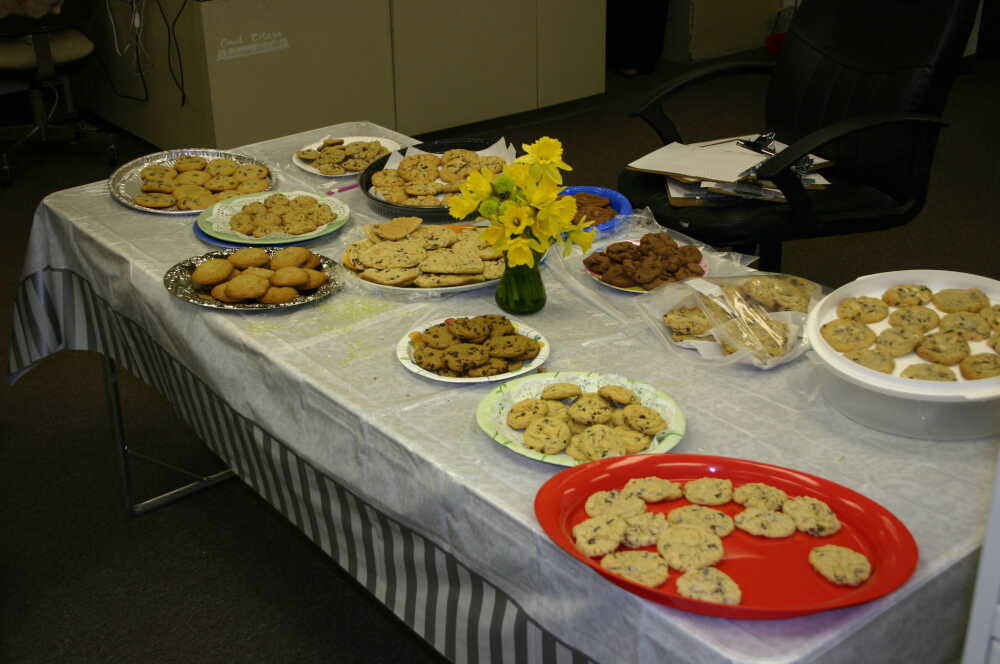 On Friday, The Brazil Times office was a buzz with many people, including our panel of judges, hopped up on the sugar rush of eating numerous delicious chocolate chip cookies provided by local residents and businesses.

Starting soon after the doors were opened, people began arriving with their entries to the front counter to be registered in the contest. Excitement grew around the office as more and more people came in carrying delightful trays, plates, baskets and boxes of cookies.

A small amount of apprehension arose among some office members when I brought in Bacon Chocolate Chip Cookies and Jason Jacobs brought in his Fiery Chocolate-Chocolate Chip Cookies to sell during the event. We wanted to let people have the option of trying an unusual chocolate experience, which made a few people a little squeamish. However, both odd but uniquely flavored cookies sold well during the event. (I will be able to share my recipe, but I might have to drag Jason's out of him at a later date. It's scary, he doesn't write anything down.)

Several of my fellow co-workers, one of which is fighting pregnancy cravings, struggled with the urge to stay out of all the delectable goodies.

Around 2:15 p.m., judges began to show up to taste the cookies supplied by 13 residents and four businesses from Clay County.

Each had their own way of eating cookies. Some charged forward and ate the whole cookie, while others nibbled.

"Oh my, this is such a good cookie," was moaned numerous times as judges taste tasted the cookies. "You've got to try this one."

After a lot of munching, judges selected two winners.

Shirley Toney's entry won the individual category, while Goodies Galore Owner Mary Fisher's cookies won the business category. Along with having their picture taken for the paper and bragging rights, the winners received a three-month subscription to The Brazil Times and $25. Both were contacted shortly after being selected by the judges, but only Fisher was able to return The Times' office before closing.

A big supporter of Relay For Life, Fisher donated her prize money back to The Times' Relay team because a prior commitment will keep her from attending the 12-hour event at the Clay County YMCA on May 8-9 (6 p.m.-6 a.m.).

"I might not be able to be there but I want to do my part," she said.

When asked about the recipe for her winning Chocolate Chips and More Cookies, Fisher said it was one the specialties of her business. However, she offered a helpful tip to bakers wanting to achieve a light golden brown color and gooey/chewy insides to their cookies.

"Remove the cookies a few minutes early from the oven and let them complete the baking process on the cookie sheet," she said. "That's the trick."

Around 3:30 p.m., my fellow co-workers and a few patrons dived into the leftovers.

When I left work around 6 p.m., there was a quiet, yet satisfied hush in the newsroom and a trail of cookie crumbs to each desk.

I have to admit I borrowed this recipe idea from the Internet, but it's been tweaked it to suit my taste.

Line one pound of thick-sliced hickory smoked bacon on a cookie sheet and place in a 425-degree oven to bake for 10-15 minutes until crispy brown, but not overdone.

While the bacon is cooking, make the cookie dough.

In a medium bowl, cream together 3/4-cup of butter, 2/3 cup of packed brown sugar, 2/3 cup of granulated sugar and three tablespoons of the (cooled) bacon grease.

Add to the mixture one teaspoon of almond extract, 2 teaspoons of pure vanilla extract, a pinch of cinnamon and two eggs. Blend by hand until the mixture turns a light color.

Remove the bacon and let cool on paper towels. Crumble or chop all the bacon except four pieces. Mix the crumbled bacon with one cup each of white and dark or semi-sweet chocolate chips to the batter. (Cut the remaining four slices into 1/2 inch pieces and put aside for topping.)

Cover the bowl and place in the refrigerator for at least one hour or overnight.

Make a maple cinnamon glaze to top the cookies by whisking 1 1/2 cups of powdered sugar with two tablespoons of maple syrup, one tablespoon of bacon grease, one teaspoon each of almond and vanilla extract and a half teaspoon of cinnamon. Add teaspoons of water one at a time until you achieve the texture of glaze you want for the cookies. If the glaze gets too runny, add a couple of tablespoons of powdered sugar back into the glaze to thicken it.

When ready to bake, pinch off enough of the chilled dough to roll into 1-inch balls. Place the balls on a baking sheet 2-inches apart, pushing a hole in the center and bake for 10 minutes, or until the dough turns a golden brown.

When the cookies have cooled, spread a small amount of the glaze on each cookie and place a piece of bacon on top for decoration. If the bacon will not stay in place, drizzle more of the glaze on top.

Store in an air-tight container in the refrigerator when not eating the cookies. Let cookies sit out for approximately 15 minutes before serving so cookies are not cold.