Showing off at the Clay County 4-H Fair 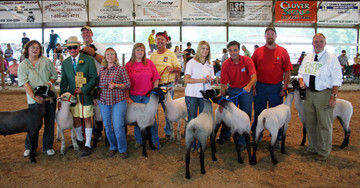 Anyone who knows me very well, knows I'm always ready for two things: A good laugh and a challenge.

So, I said yes when 4-H Sheep Superintendent Bill Harshbarger called me a couple of weeks ago to ask if I would participate in a celebrity showmanship contest during the Clay County 4-H Fair.

My only concern was I've never showed sheep before.

"No problem," he said to me with a laugh. "No one else will either. That's what makes it fun."

My sister is the one with the 4-H background, not me.

Considering I only know where the mouth and the tail are at on the animal, I figured I could keep it fairly under control. I love God's creatures, in all forms (except snakes, they creep me out).

My familiarity with Lamb Chop as a kid also was a great comfort to me as I drove to the 4-H Fairgrounds Tuesday evening.

"You can do this," that little devilish voice in the back of my mind kept telling me. "Just don't get bit or pooped on, but that would be funny."

We were all laughing and talking about what to expect while waiting for the show to begin. It was a great group to be included in, but I don't consider myself a celebrity by any means.

Inside the arena, after introductions, we all began to look around to see what was going to happen next. There were stories circulating about "handicapping" a contestant who allegedly snuck around to get lessons on what to do. I knew it wasn't me, because I was beginning to wonder about the surety of my limited knowledge.

The cute and cuddly sheep in my mind were erased when I took the leash of my particular partner -- whose name I was never told -- and it jumped straight in the air, almost whacking me in the head with its hooves.

"Scratch it under its chin," Sheriff Mike Heaton said as he took control of his sheep.

I did what I was told and it calmed down a little bit.

When it began twirling me in circles, I scratched behind its ear like Commissioner Paul Sinders recommended.

A gentle scratch from behind my partner's ear along its chin kept it calm enough to walk around the arena as I held its leash. I thought we did quite well considering we had just met.

The mutual understanding in our relationship went right out the window when the organizers announced we couldn't use the leashes anymore because 4-Hr's didn't use them during their competitions.

Ok, I thought, "I'm a good sport and my partner seemed calm enough, let's do this."

My partner, who had a dual personality, had other ideas. Once the leash was removed, it looked up at me with a slight twinkle in its eye and was gone in an instant.

I wasn't the only person with this dilemma; several of my fellow competitors were chasing their sheep around the ring too. Thank goodness for the 4-Hr's standing around the ring that cornered my partner so I could catch it.

With leashes put back in place, we were in line again with me scratching away at my partner's chin.

The show was far from over.

Apparently, the sheriff had been given some pointers on what to do and it was time to handicap his performance.

"I was set up," he later told me after the show, laughing and explaining that someone offered him tips on what to do without his asking. "I knew something was up. I just knew it."

No matter what tips had been offered beforehand, Heaton went from showing a full-grown sheep to being given a pygmy goat on a foot-long leash. (Anyone other than me notice the sheriff is probably 6-feet-4-inches tall?) Needless to say, it was funny watching him try to walk that little braying bundle of fur around the arena.

With grace and a great sense of humor, he hefted the little thing up in his arms and carried it around the arena waving its paws to the crowd.

During the swap in animals, I also got a new partner.

"That one is crazy," someone said to me as I was handing it over to Jane Santuchi.

Another turn around the arena, and I began to wonder if all sheep are nuts, or just the two I was given. My new partner (wasn't told that one's name either) also liked to jump -- although not as high -- and was attempting to drag me around the arena.

In the fray, I looked up to see Paul Sinders walking his sheep, Lollipop, around while tipping his hat to the crowd. Although my camera was around my neck, my partner kept banging its head into it or wouldn't stand still long enough for me to take a single picture.

It was a lot of fun for everyone involved.

A friend who was present to witness my first attempt at showing sheep couldn't stop laughing when they said I looked terrified when the sheep jumped.

I explained my fear of my glasses being damaged and they nodded in understanding before saying, "Gees Ivy, I figured if you couldn't handle it, you could at least cook it."

Hate to admit it, but I went home and looked through my cookbooks for recipes using lamb. I only found one, but I'm open to suggestions.

If you have a recipe that uses lamb as an ingredient, please feel free to share it here for everyone to enjoy.