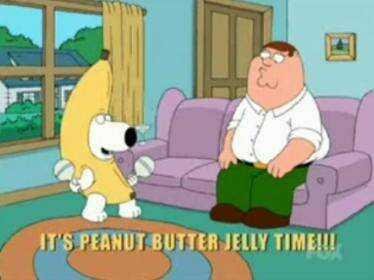 Scene from the animated television sitcom "Family Guy," where Brian Griffin (in the banana suit) tries to cheer Peter Griffin up.

Whether at the office in the late afternoon or at home after a hard day's work, it seems whenever I turn on a television one show can usually be found on one or more of the cable channels. That show is "Family Guy."

It's one of those shows where you either love it or hate it.

There just doesn't seem to be a median audience for this animated sitcom about the dysfunctional antics of the Griffin family which consists of Peter, Lois, Meg, Chris, Stewie, and their talking-dog Brian. The show also features the exploits of Peter's friends Cleveland, Joe and Quagmire and Adam West, who is the Mayor of Quahog.

My father -- and a few other people I know -- loathes the show. If he hears the show's musical introduction from any room in the house, he starts complaining and leaves the house for someplace else to be other than around the television.

However, ask him if he's sat down and watched a complete episode, he'll tell you, "I'm not watching that junk. They shouldn't make junk like that for television. What ever happened to Bugs Bunny, Tom & Jerry, Popeye The Sailor or The Road Runner?"

If you are one of the people who also loathe the show, I understand.

But you have to admire the tenacity of Seth McFarlane's show.

In 1999, six months after Family Guy went on the air, it was announced the show was to be cancelled. However, a shift in power at the Fox network and the outcry from fans led to a reversal of that decision.

After the third season, it was canceled again and episodes appeared on Adult Swim. The fan base grew, and its release on DVD got the attention of fans and the network.

With a resurrection in 2004, the show finally celebrated its official 100th episode and its syndication in the fall of 2007. Hard luck returned a few months later when a writer's strike halted production for several months until resolved.

The show has been criticized for it's crude humor and alleged similarities to another Fox animated show, "The Simpsons."

Family Guy has survived time slots next to "powerhouse" comedies like "Friends" and the reality show "Survivor."

Although I believe the show is hilarious, one particular skit in the show sends shivers down my spine. It happens when Brian, while trying to cheer Peter up, dresses in a banana suit and sings the completely annoying song, "It's Peanut Butter Jelly Time."

You can imagine my complete and utter dismay while shopping at Walmart, that song was played on the PA system and echoed down the aisles of the store.

"What in the world?" I asked my husband while looking up to the ceiling as if UFOs were landing.

"It's a real song, by the (Buckwheat Boyz)," he explained, although I admit it didn't help ease my thoughts that the music industry is definitely lacking in talent and creativity.

While I can't stand that song, I do have a recipe to share (at the request of a reader) that might change my opinion (and maybe yours too) of the phrase "It's Peanut Butter Jelly Time."

1/3-cup of strawberry (or your favorite flavor) preserves

In a large bowl, thoroughly combine the first four ingredients. Press the mixture into a 9X13-inch baking pan lined with a double layer of aluminum foil that is lightly coated with cooking spray.

Melt the peanut butter chips in the microwave for 30-second intervals, stirring each time until completely melted. Spread the melted chips over the fudge.

Lift the fudge mixture from the pan by using the edges of the foil.

Spread the preserves thinly on top of the fudge. Cut into 1-inch squares and store in an airtight container in the refrigerator.