ShamWoW to the rescue 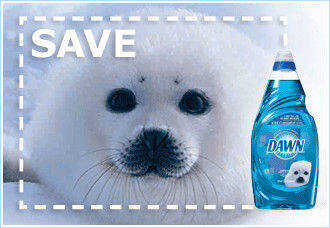 If you're interested in learning more about how P&G Company and DAWN dish soap are helping to save wildlife, log onto http://www.dawn-dish.com/en_US/savingwildlife.do for more information.

As humans, when will we ever learn to take care of the world around us?

I was 25 when the Exxon Valdez hit the Prince William Sound's Bligh Reef and spilled approximately 10.8 million gallons of oil. It was the largest spill in United States history and a nightmarish ecological disaster.

The cruel images of the disaster remain in my memory after 20 years. The pictures looked like black-and-white photos of animals trapped in oil, fighting to stay alive and so many more animals that never had a chance to survive the mucky death. Yet, if you looked close, there were traces of color.

I remember thinking, "If even a spec of color can survive that black muck, then there has to be hope."

It was the first time I heard about Proctor & Gamble's Dawn dish soap being used to help save the wildlife rescued from the spill.

It was such a simple idea.

Use dish soap designed to remove oil from pots, pans and dishes to help save the environment.

I've been proud to support the P&G company, DAWN and American ingenuity ever since.

Guess I'm literally climbing on a soapbox this time, but I've purchased special edition wildlife bottles of the dish soap to donate to the cause several times.

Today, there's another tragedy involving an oil spill threatening the coast of Louisiana. The leak from a sunken oil rig is spewing out at least 5,000 barrels a day.

P&G officials confirmed the company it is stepping up production of DAWN due to the recent oil spill. The company has also teamed up with two wildlife groups, the International Bird Rescue Research Center and the Marine Mammal Center, to help save wildlife from the spreading oil.

It's basically a race against time and tide.

Why hasn't anyone taken a look around at current technology for another simple solution?

There are times when I think that I think way too much. (OK, my husband sometimes agrees with that statement, but even I got his curiosity peaked this time.)

Case in point: It's like a chamois, a towel or a sponge. It works wet or dry and holds up to 12 times its weight. It's ShamWow.

Yep, I said it, ShamWow.

I have a piece of this material and it picks up spills (including a nasty oil spill from our deep fryer -- more about that later) like a breeze!

Why can't we hook a huge piece of this up to a couple of ships (maybe a military airplane or helicopter too, for air support), and either move/hold the spill away from the coast for more time to analyze what to do next?

Maybe it could "pick up" the oil and possibly we would be able to recycle the mess by squeezing out the excess oil.

It's a little expensive at $19.95 for eight various sizes of pieces, but there is a sale on the Internet right now for $14.95. I think the government could fork over a few grand to at least try and see if it works. Better then buying a $5,000 hammer!

Heck, I'd pitch in a few bucks for the cause just to see if simple American ingenuity still works.

I hear you out there, "What's this got to do with cooking?"

I had this epiphany while making a New Orleans specialty, Beignets. (Karma, isn't it?)

Actually, I was cheating at the recipe. But, using the ShamWow to clean up the subsequent oil spill was what got me to thinking.

If you would like to cheat at making beignets (a light and puffy type of doughnut), here's how:

Place one package of room temperature pizza dough in a bowl while the oil in your deep fryer or in a heavy pan on the stovetop heats to your preferred cooking temperature. (Be careful, cleaning up a hot oil spill is dangerous.

Mix into the pizza dough at least 1/2-cup of one or two of the following sweet items:

Finely chopped up candy bars, and/or

Lightly form dough into small balls and fry until a light golden brown. Remove and let cool on baking racks for one minute.

Dust with powdered sugar or a cinnamon/powdered sugar combination. You can substitute chocolate powder for cinnamon if you prefer the taste.

For a unique flavor with using dried/prepared fruit, sprinkle lightly with a pre-made drink mix before serving.

As always, enjoy the recipe.