A shopping trip, a gorilla, a clean house and a culinary trip to Hawaii for Mother's Day 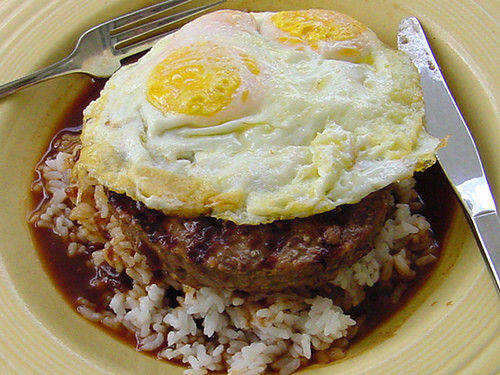 Because he had to work Sunday, my husband went all out this year to make sure I had a nice Mother's Day weekend

We spent six hours at a local auction Saturday. My father was there too, along with several friends and a couple of co-workers. We were all shopping for some very unusual purchases (YES, that was us driving through town with a almost life-sized stuffed gorilla sitting in a leopard print chair on our way home afterward!)

Instead of cooking and against my financial objections, hubby took me to dinner in Terre Haute.

My daughter and son-in-law gave me decorations for my bathroom, which is in the process of being remodeled right now, before they left to visit other family. (They also began cleaning and preparing for the spring cleaning and remodeling we're doing this year on Monday. Check out my hubby's vacation plans in his blog.)

As for my son, he went to visit a friend Saturday evening. However, hubby made sure they both went shopping before the weekend to buy a gift for me. (I got my son's present, a great big hug and his wacky smile Sunday morning. He also helped me clean the front porch and house all afternoon.)

But, by the time we got home Saturday night, I was tired. I don't even know what time I zonked out.

Yet, my hubby's smiling face and the smell of something wonderful woke me up Mother's Day.

On my breakfast serving tray was something called Loco Moco, a widely popular dish native to the Pacific Islands.

What little bit of knowledge I learned while watching the Food Network and of course Wikipedia, the Inouye family, who owned the Lincoln Grill, Hilo, Hawaii in 1949, created the dish.

Legend has it that a group of boys from the Lincoln Wreckers sports club (and later surfers) contributed to its creation. Because the boys did not have a lot of spending money, they asked Nancy Inouye to put some rice in a bowl with a hamburger patty on top and brown gravy poured over it at a cost of 25 cents. A fried egg was added to the dish sometime later.

Over the years, chefs have put their own creative variations on the dish, but my hubby stayed with tradition.

He only made a few changes. First, he sprinkled a bit of cheese on the rice, made a mixture of chopped sirloin/ground turkey for the burger and prepared homemade brown mushroom gravy for the topping.

While it might sound like a nasty combination, I hate to admit it but I made a pig of myself and wolfed down breakfast pretty quick. No seconds for me (or lunch or dinner), but my son (I think) ate three plates before stopping!

My father thought we were nuts, but I caught him sneaking a bite or two.

So, I enjoyed my LOCO Mother's Day with my family. I hope you did too.