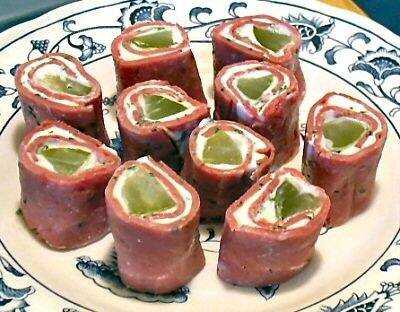 I'm bored today, yet I have to work.

My taste buds are still shot, yet I must decide upon a recipe for this column.

Top it all off, it's Monday.

A couple of years ago, a co-worker brought a simple, yet tasty, treat to one of our pitch-in dinners here at the newspaper office. I don't think I'd seen or tasted them before, but I loved the little appetizers.

It was a rolled up piece of deli sliced ham with softened cream cheese spread on top and a paper towel dried dill pickle spear. (You have to let pickles set on paper towels to dry out before rolling.) Refrigerate before cutting. Toothpicks are stuck in the tiny pinwheels to hold them in place. That's as much as I know about the co-worker's recipe for this little concoction.

Granted, these were not culinary masterpieces, but every time my co-worker brings them I have to fight the urge (with a little help from my husband) to dump the contents of the container onto my plate.

Food in its simplest form often has the best taste.

However, I can't help but tinker with recipes. It doesn't matter whether I'm actually cooking, eating something new or just thinking about a recipe, I deconstruct it in my head.

If the recipe is sweet, how can I make it savory?

What would the recipe taste like if I changed the cooking technique?

How could I make the recipe something a picky eater would eat?

Can the recipe be made better by adding or removing a few ingredients?

Is there a way I could cheat -- using ready-made products -- to simplify a recipe?

My husband says I think too much, but he loves my cooking experiments.

I hope the rest of my family and friends feel that way, because we're having a get together sometime soon and I'm planning on going to the deli and making several pinwheel variations. Although I don't have measurements yet, I'm still in the creative process of taste and like, here are a few of my ideas:

I want to spruce up my version, so I'm planning on adding finely shredded cheddar cheese and a sprinkle of Mrs. Dash to the cream cheese.

After caramelizing a chopped sweet yellow onion on the stovetop, I'm going to add it to the cream cheese with a dash of steak sauce before spreading on slices of roast beef and rolling it up with the dill pickle. I might add a touch of garlic and of course some shredded Muenster cheese to the cream cheese mixture.

Mix one small container of Kraft Pimento Cheese Spread with softened cream cheese and some shredded Co-Jack Cheese before spreading on slices of pastrami with finely chopped and dried bread and butter pickle pieces.

Mix finely chopped precooked bacon pieces, only the meaty portion of one small ripe tomato, chopped red onion to taste, a tablespoon or two of fresh shredded Parmesan cheese and a teaspoon of mayonnaise to the cream cheese mix. After spreading the cream cheese on sliced turkey, sprinkle lightly with shredded lettuce before rolling up with the dill or a sweet pickle. For a richer taste, I might try using one or two sun-dried tomatoes instead of the fresh tomato.

And now here is the "you-think-way-too-much" idea, which I'm not sure I can make because of lack of ingredients, but I think it would taste good.

Use slices of honey baked ham. Add shredded sharp cheddar and a sprinkle of fresh ground black pepper to cream cheese spread with pineapple already in it. After spreading the cream cheese on the ham, use pickled pineapple instead of a regular pickle. I know a few noses just crinkled up, but that sounds good to me.

Now, while your noses are still crinkled up, I have another idea to share.

Everyone likes fried food, so why not deep-fry these pinwheels?

It couldn't be that hard.

Instead of refrigerating the pinwheels, why not freeze them for a few minutes before dipping them in Tempura batter and frying them? According to what style you make, there are a multitude of dipping sauces to choose from, and, as a last resort, maybe it's time to get out that fondue pot?

I'm still tinkering away with ideas for this simple recipe that makes a great snack during these hot summer months. Hopefully these ideas will spawn a few more ideas from readers, who will graciously share them on this blog space.