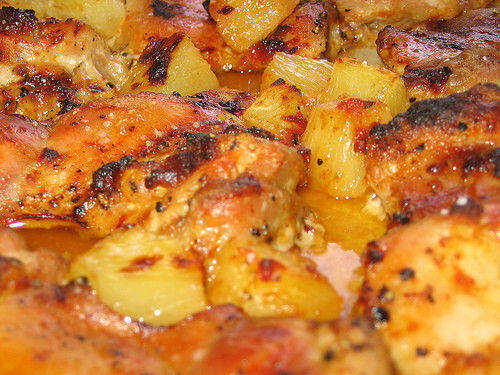 There's something strange about a home after company leaves. It's the same as it always is because your family is still around, but it's quieter.

Our family recently spent a crazy two weeks with my husband's brother, Josh, and, although my husband and I had to work through most it, we all had a great time together. Our other friend went home early, but plans to visit again in the next week or two.

If you read my last blog, you know Josh's main objective for his vacation was to learn to cook so he could fix a special meal for his mother.

How could I say no to that request?

It's a special moment for a mother when children attempt to cook for them. Doesn't matter what those little fingers make, mothers eat it with a smile on their face and say how terrific it is.

I was surprised with breakfast in bed by my two children one morning. They were so excited to serve me Fruity Pebbles in dark chocolate syrup with orange juice for a drink. Honestly, it wasn't that bad, but using a large mixing bowl, a full box of cereal and the whole bottle of syrup was a little too much. Talk about sugar shock!

Usually these special moments occur when children are little and curious about what mommy does around the house.

Any mothers out there remember when your precious little ones happily helped around the house? That time before they realized it wasn't really fun and it was a chore to sweep the floors, do the dishes or to clean up their own messes.

It's not easy to change a child's mind about doing things once those teenage years come around, is it?

"One day you will look back on this moment and remember," I tell my children when they want to play that "you just don't understand" card with me about doing a chore or taking on a responsibility. "When you grow up, you'll have to do for yourself because no one else is going to do it for you."

But I can see how more special that moment could be when a grown-up child takes the time out of their hectic lives to prepare a special meal for their parent.

As working adults with responsibilities of their own, to have a child stop for a moment and think about how to make a memory and spend time with their parents is, well, miraculous. I guess that's when you realize that "as a parent" you did something right.

Anyway, I took Josh under my wing and gave him a crash course in cooking. The same one my grandmother gave me.

I have to admit there's nothing funnier than seeing Josh's one eyelid raise in suspicion as I tell him it really is ok to dump bourbon and black pepper in the brownie mix. I see that look all the time from my husband, but to see it on another familiar face was hilarious.

"Just write the recipe down," he'd say while shaking his head.

Nice to know I can confuse more than one tall Texan.

This week's recipe is one that I made for my husband's parents when they stopped by for dinner on Monday after the 4th of July. They both liked it, so Josh wanted that recipe too.

Made in a Crock Pot, California Pineapple Chicken is a good sandwich or a delicious topping over rice, noodles or couscous.

Josh, as soon as I post this to my blog, it's on its way to your e-mail too!

3 stalks of celery, finely chopped with the leaves

1 large can of chunk pineapple, separated

1/2-cup of your favorite barbeque sauce or ketchup

Mix together salt, celery salt, garlic powder, onion powder and the nutmeg or cayenne. Season chicken with the spice mix and let sit for 5 minutes before browning in a heavy skillet in equal parts of melted butter and olive oil.

When chicken is golden brown, transfer to plate until all chicken is cooked. Layer the chicken with the vegetables in the preheated Crock Pot sprayed with PAM.

Using the drippings in the skillet, combine pineapple juice, soy sauce and sugar and cook until the sauce thickens slightly. Pour over chicken.

Cover the Crock Pot tightly with a layer of foil and put on lid. Cook chicken on high heat for 4-6 hours, or until the chicken is tender and falling apart.

Remove foil and add the pineapple chunks before reducing the heat to low and letting cook another hour.

Toast hot dog buns or grill them with garlic butter before serving them with the toppings.

Serve over your choice of rice, noodles or couscous with the cheese, avocado, tomatoes and lettuce on the side.

NOTE: You can add jalapenos and mushrooms to this recipe if you like, but I would wait for the final hour of cooking. Also, Provolone and Muenster cheeses are wonderful substitutions for the cheese.