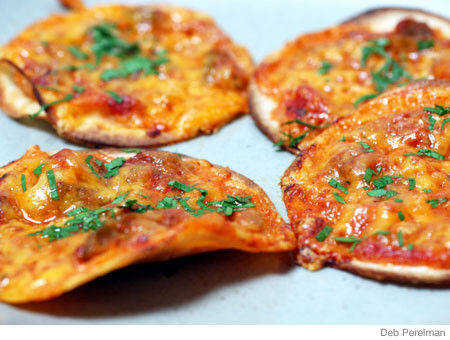 Although this picture only shows one layer, Double Decker Mini Taco Pizzas are easy to make.

The countdown has officially begun.

If you ask him when school starts, my son can tell how many minutes it will be before he walks through the door of the building to begin the 2010-11 school year. An official junior, he's excited to get back into a routine after the freedom of summertime.

It's a delightful change of pace after a few years of dealing with a teenager who didn't want anything to do with the responsibilities of high school.

In the past, there have been a few discussions regarding alternatives to returning to school, including:

"Can I be homeschooled or how about taking some classes online?"

"What if I got a job and just dropped out?"

Well, he thought it would be a discussion. You would think my frustration and yelling might have given him a clue that there wasn't going to be anything near a quiet answer to those questions.

Without a clear answer to why he didn't like or want to go to school, other than it was boring, stupid, or he felt like his teachers didn't like him, my son's grades deteriorated last year.

It wasn't easy. I guess my son inherited a little too much pride for his own good. However, when he finally realized there was a problem he couldn't fix by himself and reluctantly asked for help, my son's expectations about life changed.

I think realizing he wasn't alone or stupid and that he could rely upon others for guidance helped him mature. Although not a straight-A student, he quickly caught up in his class work. That alone gave him a new-found confidence at school, and a new and hopeful vision for the future.

Normally, during summer break, my son experiences "brain drain" if there wasn't some type of activity to keep him stimulated while out of school. This past summer, although he spent his fair share of time playing video games, my son also spent time thinking about his future goals.

That thought process has reignited an old passion, cooking.

How many 4-year-olds do you know who go to yard sales to buy cookbooks? My son used to have a bookcase to store all his cookbooks. He used to look at them all the time and help me pick recipes to try for dinner. A trip to the library meant he would bring even more home to thumb through.

"I want to write a cookbook when I grow up," he used to tell me when he would point out a picture of something he thought looked good enough to cook.

I loved our time together in the kitchen, learning how to measure things and playing with food flavors.

But, when he went into sixth-grade, my son began to lose interest. Apparently, it wasn't cool to cook anymore, and by the time he was in eight-grade, the cookbooks were given to me. (I still have them.)

For a while, the only time he spent in the kitchen was to make a cake or grilled cheese sandwich. I missed not having him around.

However, during the past year or two, my son has found his way back to the kitchen from time to time, helping me and/or my husband cook.

This summer, we were both overjoyed to find out my son had decided on a career path. He wants to be a chef!

And to reach further in obtaining that goal, he's planning on getting back in the kitchen. My son has agreed to help cook Sunday dinner at least twice a month and help us cook dinner a couple of nights a week.

It might get crowded in the kitchen (with myself, my husband, my father and now my son all in there vying to get to the stovetop), but I am really looking forward to it.

Although I don't think he's quite ready to display a bookshelf with those childhood cookbooks in his bedroom, I'm happy he's looking forward to helping plan and cook for the family (and his hungry friends). It's an opportunity to get to know each other all over again and create some new memories to take into the future.

In honor of going back to school and getting back in the kitchen, I thought I'd share a simple recipe for Double Decker Mini Taco Pizzas.

You will need the following items:

1 bag of round tortilla chips

1 small can of refried beans

1 cup of shredded co-jack cheese (or your favorite)

Mix a little hot water with the refried beans to make it easy to spread, if necessary. Spread a teaspoon of the beans on an unbroken tortilla chip and top with another tortilla chip.

Line a cookie sheet with tortilla chips while the oven heats to 350 degrees. You can do this in a microwave if you use a paper plate or glass dish to heat smaller batches.

Place a spoon of salsa on each chip, a sprinkle of the onion and then some cheese. Top with olives (or any other topping you might like, including pepperoni, jalapeńos, sliced hotdogs or whatever).

Bake until the cheese melts.

Remove from heat and let sit for a few minutes before dipping chips in sour cream, guacamole or the remaining salsa.

You can make or use leftover ground beef/sausage seasoned for tacos either in place of the refried beans or added to the bean mixture for a heartier snack.