A recipe is just a suggestion 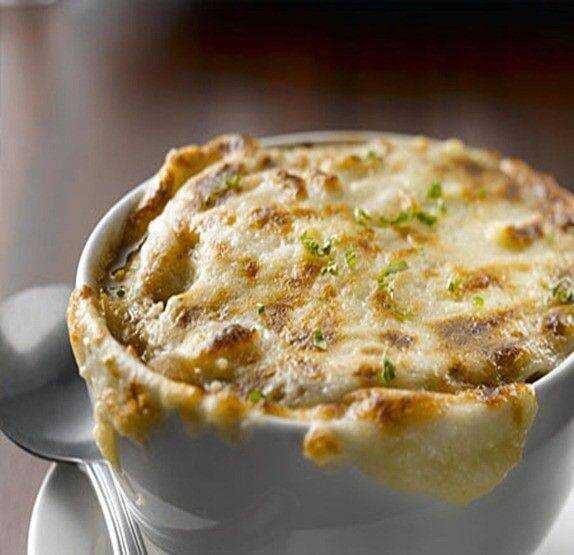 Several years ago, while trying to learn new recipes and cooking techniques, I made French Onion Soup.

I liked it, but it apparently wasn't a hearty enough meal for some of my guinea pigs.

So, believing my grandmother's idea that a recipe is just a suggestion, I began to tinker with it.

The second time I made the soup, we had some leftover deli roast beef slices in the refrigerator. I grew up in a house where you didn't throw food out because there were starving children in the world. While it didn't really matter much to me as a child, as an adult living in economic hard times and realizing hunger is an issue in the real world, I hate to see food wasted.

So, I chopped up the roast beef and sliced some mushrooms to add to the soup. It was better, but not quite there.

The third time I didn't make the soup, but attempted to put the techniques and flavors into a roast cooked in the oven. The roast was good, but I really liked the gravy better.

So, the fourth time was the charm.

I cooked a roast in a Dutch oven on the stovetop, reserved the fatty juices to caramelize the onions, celery and garlic in.

The addition of red wine and beef bouillon cubes hit the spot.

Although it was great, I kept tinkering away at the recipe, making it my own.

One time, when there really wasn't enough red wine, I dumped in some Jack Daniels. Hey, if my grandmother can put it in cakes I can put it in soup!

My version of French Onion Soup is beyond what the original recipe is, but it keeps getting better.

Last year, after the office Christmas Party, a pan of leftover roast beef slices and gravy in the refrigerator made me cringe. We threw out the same pan in 2008, and I just couldn't see that happen again. So, with permission, I took it home and made my soup for everyone at the office

I know my family likes my cooking, but I'm never quite sure how new guinea pigs will take it.

The largest Crock Pot I own, which was filled to the brim, was emptied in no time.

This year, after Thanksgiving, I got to take home the leftovers again. This time, a co-worker donated the wine, so it was a collaborative effort because my husband made the soup, adding his flair to the recipe. (I know he had to have slipped in some cayenne somewhere. He's from Texas. Isn't that the law down there?)

Our publisher, who at first didn't quite like the smell of the soup, was eager to ask for the recipe after trying a bowl.

So, if you like this recipe, tell the boss. It was his idea for this blog.

Also, remember to try and make this your own by tinkering with it and adding flavors you like to the mix.

SautÚ the steak and mushrooms in the butter until the meat is tender and pulls easily apart. Remove from pot and slice or pull the beef into thin strips so it can be added to the soup later. Leave drippings in the pot to cook the remainder of the soup.

Add the next four ingredients to the pot and slowly cook until the onions are caramelized. Don't be in a hurry, you don't want a burned flavor in the soup.

* 6 large onions, a combination of sweet and red onions (about 4 pounds), thinly sliced

Add the remaining ingredients to the pot along with the beef.

Let the soup simmer for at least an hour before serving.

Top with pieces of the toasted bread and melted cheese or use some of those leftover dinner rolls from your holiday dinner. You can also use French Fried Onions you buy at the store for the topping on green bean casserole.