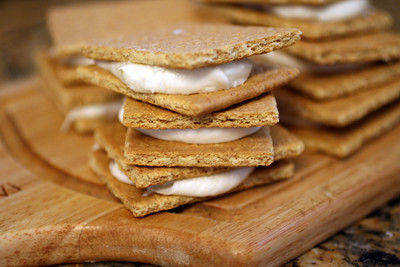 "The best things in life are unexpected, because there were no expectations..." Eli Khamarov

Ever have one of those days where it seems like everything is going wrong, and then, all of a sudden, the most unexpected thing that could have ever happened does.

I've experienced them frequently in my life, but one day in particular stands out in my recent memory.

Waking up late with a splitting headache from a severe cold/sinus infection and a throbbing toe from stubbing it on the bedpost while in a hurry to get ready for work, I stood in the busy checkout line at a local grocery store not wanting any type of human contact.

Kleenex, cough drops, aspirin, band-aids, a bottle of pop and a bag of potato chips were vicariously clutched in my arms while I struggled with a tissue and a runny nose.

I'm sure my face was pinched with one of those frightening "go away" looks my kids say I get when frustrated, because I was.

I remember my teeth were hurting because I was gritting them so tightly.

There was a woman standing in front of me with about a 1,000 coupons. It was taking what felt like forever to ring up her purchase.

Trust me, I appreciate a thrifty person. I also use coupons when I can, but that day I just wanted to get out of the store, so I could get to work and get the day over. Going back to bed sounded like the place to be, not standing in line waiting for the third price check in a row.

It wasn't my most shining moment. Inside my mind I was cursing up a blue streak at my misfortune.

I hate to admit it, but I was in full selfish mode.

When the lady finally left with her overloaded cart and a four-foot long receipt, it was my turn to quickly get out of the way of the several frustrated people standing behind me.

However, as with the flow of the day, I opened my wallet to discover it was empty. Apparently my kids needed lunch money that day and forgot to tell me.

I stood amid a flood of emotions. Anger, frustration and embarrassment don't mix well with a sore foot, runny nose and a pounding headache.

What I was just privately cursing away about inside my mind was happening to me.

I wanted to crawl into a corner and cry as I heard someone behind me breath a huge, angry sigh of frustration.

Just as the words "I'm sorry" escaped my mouth, the man behind me handed the cashier money for my purchase.

"We all have bad days," he said with a smile while nodding at the items lying on the counter. "Looks like you are having one today."

I tried to explain about the lunch money and my kids in between wiping at my runny nose, but he just laughed.

"I have three kids myself, you don't need to tell me about an empty wallet," he said as the cashier gave him back his change. "I've also had the flu, and it's a real wooly booger to get rid of."

When I offered to repay him, he said, "No need to. Just pass the good grace on to someone else in need sometime. Anyways, a good deed isn't really good if you expect something in return."

I have returned the good grace many times since that day, and will continue to do so whenever I have the means to do so.

That simple gesture showed me that life really is better when you live it with unexpectations.

Kindness, compassion and forgiveness are more fulfilling and last longer when shared without expectations of a pat on the back or a reward of some kind.

When my children were younger, my son and daughter didn't always get along.

After one really loud argument while trapped inside during a rainy summer day, the two decided to draw an imaginary line of demarcation around the house with the expectation of "you stay on your side, I'll stay on mine and there will be peace."

There wasn't any, but parents reading this column already knew that. The fight quickly changed gears and then became about crossing the lines. Parents out there reading this, you know all about guerrilla warfare among siblings. The war had been brewing for days, and was now in full battle mode.

The one place they didn't divide up was the kitchen.

"You both have to eat," I told them while trying to stop the foolishness from invading my space. I separated them and continued my housework. Then I noticed it had become very quiet, too quiet.

When I returned to the kitchen, I found my son eating graham crackers coated with leftover homemade cream cheese icing at the kitchen counter. His sister was nowhere in sight. I found her in the bedroom drawing.

OK, I thought, peace at last.

As I washed the dishes, I heard my daughter enter the room and search the refrigerator for a snack. She rummaged around the cabinets and pantry, but nothing suited her fancy.

Out of the corner of my eye, I watched my son put some of the icing on the graham crackers and push them toward his sister.

She didn't say anything, just took the peace offering in silence and sat down beside him to eat.

A few minutes later, they were laughing and playing a board game on the floor together. The rest of the day was pleasant for all of us. We even found time to play in the rain later that afternoon.

Maybe it was the sugar rush. Maybe it was the time out. Maybe they were just tired of fighting and figured it was better to get along. Who else were they going to play with anyway?

"She was hungry," my son said later. "She needed something to eat, just like I did."

Wouldn't the world be a better place if we all thought about the needs of others with the understanding that we sometimes need the same things too?

"Anyway mom, that frosting is killer on graham crackers," he said. "It wouldn't be fair to eat it all and not share it."

So, with great unexpectations, I'm sharing a recipe from my Grandma Iva's recipe book for Cream Cheese Icing.

Mix the cream cheese and butter until creamy. Add the two flavorings before gradually mixing in the confectioners' sugar. This is great on Carrot Cake, Red Velvet Cake or as a peace offering on graham crackers or oatmeal cookies. Store in the refrigerator after use, if you have any leftover.