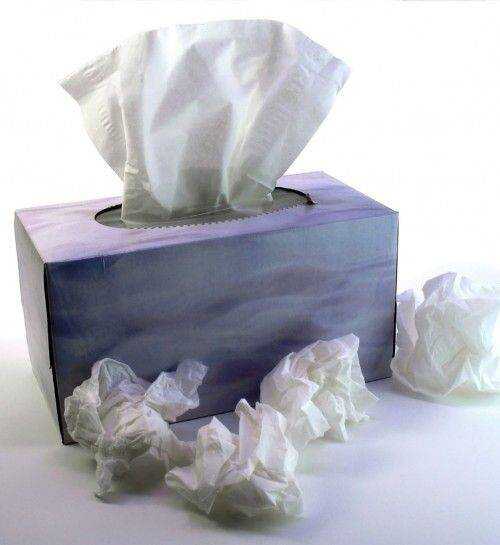 It's been one of those hectic and exhausting days, when all I want to do for dinner is throw some lunchmeat, cheese and a loaf of bread on the counter and let the hungry masses at my house fight over it. They can open the refrigerator door for the condiments themselves.

The flu bug, which seems to have liked me WAY TOO MUCH this year, has settled in for a summer nap among my immune system. After three weeks of battling a runny nose and coughing myself silly, I gave up and went to the doctor (twice) for help in fighting back.

I'm not sure I'm winning, but I'm upright and moving. That counts, right?

To show you how truly weird my struggle has been with the flu bug, I'm going to share with you the most embarrassing, icky, yet humorous moment of my marriage.

WARNING: The following content is not for the faint of heart! But, I have to admit, it's funny! Just remember, you were warned in advance of continuing.

After blowing holes in Kleenex for four days straight, I was sure my nose couldn't produce any more mucus. Then, thank God, there was finally a moment when my sinuses breathed a sigh of relief and allowed me to smell the air for the first time in weeks.

I was enjoying being able to cook dinner and smell the aroma of food again.

However, it was short lived.

I don't know what caused it, but, all of a sudden, my nose became Niagara Falls. It was literally pouring down my face.

Having a prankster for a husband is usually a lot of fun, but not at that moment.

While reaching for a paper towel (yep, it was that bad), my husband decided to unexpectedly sneak up from behind and grab me around the waist. He likes the fact I actually yell "EEKS" when that happens. And I think he wanted to prove to his brother (another prankster in the house) that I did that.

Remember, I warned you...

When he grabbed me, I yelled like expected and spun around quickly to ... Well, let's just say "splat." (Ultimately, he had to clean his glasses it was so bad.)

There was stunned silence. I was completely mortified.

In my 46 years, I've never, never experienced anything like that. I didn't know what to say or do. What is the etiquette for "snotting" on someone?

Being who he is, my husband started laughing while handing me a paper towel.

I just stood there for a second, and then he said, "Didn't know you were making a special sauce for dinner."

Grossed out for a moment, I realized this "icky situation" was funny.

Since then, my husband (and my brother-in-law) has taken care of me. They both have made sure there were plenty of tissues within arm's reach.

When I later shared this story with my doctor, I thought she was going to cry from laughing so hard. While sort of disgusting, I hope it made you laugh too.

While recently talking about what to write about for this blog, the pranksters said in unison, "What about your recipe for special sauce?"

So, I guess you can blame their twisted sense of humor (and mine too) for this blog...

Anyway, there is a recipe in my collection for "special sauce" when making toasted sandwiches like grilled cheese or a Panini.

Mix together the following ingredients:

1/2 teaspoon each of parsley and ground black pepper

Blend together and refrigerate in an airtight container at least 30 minutes before using.

The sauce will keep for at least a month. I've discovered that it can also be used instead of herb- or garlic-flavored butter on steaks/chicken/pork on the grill.

Don't be afraid to play with other condiments as well, because BBQ sauce, Tabasco sauce, ranch salad dressing and plain mustard also work with tasty results.