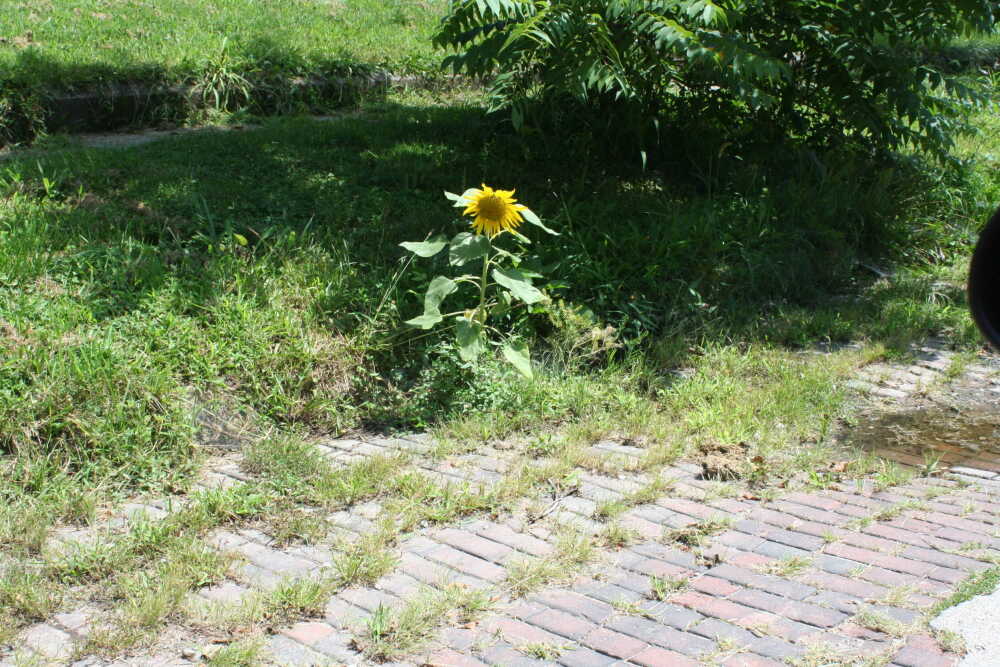 Sometimes you see things that you know just don't quite make sense. I had one of those in my neighborhood the other day.

Left for work like everyday. Came home like everyday. What caught me off guard was what I saw in the headlights of my car when I pulled up to my house.

There, at the edge of the road, was a small sunflower with its bloom just starting to turn yellow growing out of the bricks on Kruzan Street.

It was odd because I had just taken my grandson Booga out to watch a street sweeper clean the road two days before.

Other than being weird: Just how does a sunflower sprout up in between the bricks of a road, suddenly out of nothing?

I didn't think much more about it. There is so much traffic on our road due to the construction project on US 40 I believed it was just a matter of time before it would get run over.

Looking back that was a very hard-hearted thought process. I'm not normally like that, but -- in my defense -- it was just a flower. At least then it was.

A few days passed and I found myself out at the Clay County Fairgrounds covering the 4-H Fair. Sweating bullets, looking a complete mess several people approached me and began talking about my job here at the paper. They talked about prior stories I had written and gave suggestions for new ones (thanks to all of you by the way.)

Then one lady came up and asked what happened to that "bad boy" I wrote about a few years back.

She was talking about a young man I knew who was among those who were the outsiders -- the fringe of society, dressed in black and left to live on the streets for days and months at a stretch. He, like many others, roamed the streets of Brazil at all hours of the day, perceived troublemakers.

But he was so much more, intelligent, funny and had a heart of gold that knew no boundaries of love for those who he called family. Although he often had nothing but the clothes on his back, he would share a joke or listen to others when they felt they had no one.

I wrote about how desperate he was, and how at the lowest point he came to talk to me after trying to commit suicide.

"There's just too much. I don't know how my life has gotten so bad," he said to me back then. "It seems like everything I do is wrong."

Time has passed for that young man who called me mom. And the last time we spoke life was good. A family man working to provide a home, he is on the right track. Older, but not too old to give me a hug and call me mom.

He holds a place in my heart, same as my two children, always will.

In the middle of chaos that young man survived and came out the better for all he endured. Much like that sunflower growing amid the bricks of Kruzan Street continues to survive where it shouldn't, amid the chaos of traffic.

If you ask me, that simple fact it grows there is proof that good prevails if allowed, if nurtured.

I walk outside each morning and smile at the sunflower growing taller each day, stretching toward the sky. It makes me smile. My day is a little brighter because of it.

Hope the next time the street sweeper comes down the road the driver swerves to miss the lone sunflower growing in the road on Kruzan Street.

Wonder if I should call the mayor and tell him about it?