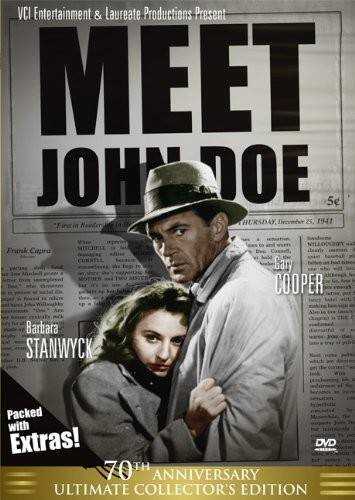 Frank Capra's "Meet John Doe" stars Gary Cooper as washed up baseball player Long John Willoughby, who makes a national radio speech that is simply incredible in its simplicity and truth for 1941 when the film came out, and just as much if not more now in 2015.

What is going on in the world today?

According to information complied by Mass Shooting Tracker (shootingtracker.com), there have been 353 mass public shootings this year alone, and still counting, as of the last reported one on the website December 2, 2015.

Public places of all types have become war zones. Innocent people are targets by people whose agenda could be anything from anger, seeking justification for some feeling of being wronged, religious or racial motives or someone just wanting to be famous. It's sad these incidents are as common place on the news as robberies.

How many innocent people have to die from this nonsense before something is done? From the time I started thinking about writing this piece to now, the number went from 251 to 353 in just over a month. Think about all the people, the innocent victims, affected by this madness.

Truth is: If every gun in the world suddenly disappeared at sunrise tomorrow, people with an inclination to harm others would just find another way to kill each other.

It's not the fault of a weapon, any weapon, it's a flaw in our humanity.

The "Shine A Light" concert, which is bringing all kinds of well-known music artists together on Friday, Nov. 20, took place in Los Angeles and was aired on six different networks at the same time - in hopes to spark a dialog about the problem.

Is it working? I don't know because honestly the color of someone's skin is not a problem for me and I can't grasp why it matters to anyone.

Once again: The problem is humanity. People have lost the ability to treat each other with respect, replacing it brutality.

A very simple definition of humanity is: The quality or state of being humane.

Common sense has been thrown out the window and everyone seems to have a reason why the problems of the world around them are not their fault.

Apathy, is that the problem? We are way past lack of interest, feelings, emotion or concern as a society. Something else is wrong at the core of our souls.

I'm not alone in the desire that our world be a better place.

One hundred years ago people dreamed the world would be filled with all types of new-fangled contraptions by the dawn of the 21st century to make our lives better. True, we have some amazing technology, but look at all the things we don't have that we should; plentiful food and clean water, no air pollution, a clean way of eliminating refuse, and most of all peace and goodwill for all men.

The Golden Rule used to be taught in the small class rooms of yesterday. You know, "treat others as you would like to be treated."

Guess what? That's a double edged sword. If you treat others badly, they treat you bad. I think that says a lot about the state of the world in which we live right now. I see it every day while doing my job, so many people who don't smile, maybe they can't smile anymore. I don't know how, but, if you pay attention to others you might see it too, I think you will agree we need to do something about it.

The time is right.

The Christmas season is just around the corner and one holiday movie speaks volumes about the nature of man. "Meet John Doe" stars Gary Cooper as washed up baseball player Long John Willoughby, who makes a national radio speech that is simply incredible in its simplicity and truth for 1941 when the film came out, and now in 2015. I included only a portion of the masterpiece of dialogue, but it's enough to get an important point across.

I know a lot of you are saying to yourselves, "He's askin' for a miracle to happen. He's expectin' people to change all of a sudden. Well, you're wrong. It's no miracle. It's no miracle because I see it happen once every year. And and so do you -- at Christmas time. There's somethin' swell about the spirit of Christmas, to see what it does to people, all kinds of people.

Now, why can't that spirit, that same, warm Christmas spirit last the whole year around? Gosh, if it ever did, if each and every John Doe would make that spirit last 365 days out of the year, we'd develop such strength, we'd create such a tidal wave of good will that no human force could stand against it. Yes sir, my friends, the meek can only inherit the earth when the John Doe's start lovin' their neighbors.

You better start right now. Don't wait till the game is called on account of darkness.

Wake up, John Doe. You're the hope of the world."