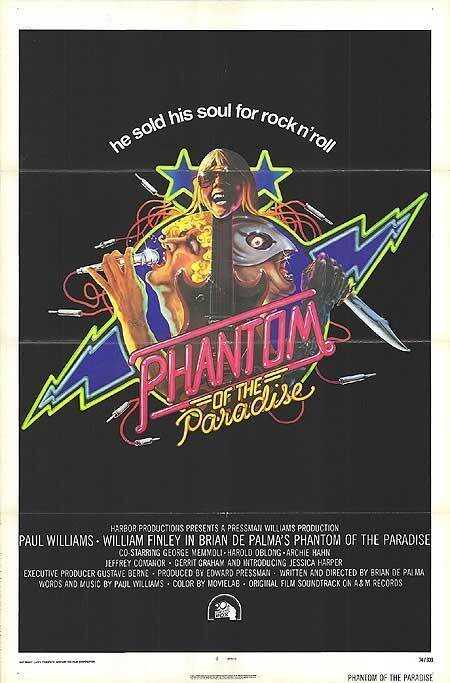 The strange and unusual 1974 movie “Phantom of the Paradise," which was a rock musical version of the classic 1943 horror film “Phantom of the Opera” that included opera, shock horror and comedy was pre “Rocky Horror Picture Show,” and was something the movie-going public didn’t quite grasp at the time.

Television provided an extremely profound moment for me on September 11, 1977.

It’s a very vivid memory: I was going on 13 and watching the season premier of “The Hardy Boys and Nancy Drew Meet Dracula” while laying on the floor of my grandmother’s living room in a black beanbag chair.

Intrigued by mystery shows then, and now, the show was perfect for me. I was starting to get an interest in what today would be called the gothic/horror genre.

Don’t recall how the story line took the two Hardy Boys and Nancy Drew to Transylvania to be a part of a Dracula Festival held at Vlad The Impaler’s historic castle, but I was blown away by the guest star they found upon their arrival.

Singer/songwriter and actor Paul Williams performed a song that I would never forget; “The Hell of It.”

Needless to say, my grandmother was horrified by the song and almost shut the television off. I was lucky she caught the tail end of the song, not the whole version, so she left it alone. She never knew it was performed again later, and then again the next week when the two-part episode concluded.

At that time Williams was considered a rockstar, which would be strange even by today’s standards. He wasn’t the handsome cookie-cutter musician we often see now. Unique didn’t even do him justice as a description. While he didn’t look the part, the music he created was all heart.

Williams himself described the best part of songwriting was the “heart payment,” when a song reaches out to a person so much that it impacts their life.

That television performance stirred up questions in my mind about death, and how did I personally feel about it. For the first time I realized that everyone dies, it’s inevitable.

So I set out to learn more about Williams and his music, which led me to an unusual 1974 movie “Phantom of the Paradise.”

A rock musical version of the classic 1943 horror film “Phantom of the Opera” that included opera, shock horror and comedy. It pre “Rocky Horror Picture Show,” and was something the movie-going public didn’t quite get at the time.

However, the soundtrack of the film, which helped motivate the story, was all originally written and composed by Williams, who also starred in the movie. It was praised by critics.

“The Hell of It” was a featured song, but there were others as equally stirring, including “The Phantom's Theme (Beauty and the Beast),” “Special to Me,” “Faust,” and especially “Old Souls.”

It’s lyrics haunt me today: “Our paths have crossed and parted this love affair was started long long ago…This love survives the ages, in its story lives are pages… Fill them up, may ours turn slow.”

I remember my father and friend of his gave me a box of records, which included the soundtrack to “Phantom of the Paradise.” Over and over I played that album, committing the lyrics to my mind. Burning them into my heart and soul to the point I told my family that if I died “Old Souls” had to be played at my funeral.

Here we are 40 years later and the lyrics echo in my mind as I sit here writing this. They comforted me these past few weeks during another profound moment in my life: As our family buried an incredible man. Many people have offered condolences for the passing of my father — Mitchell “Jack” Jackson — often asking “Are you ok?”

I have been very lucky to have my father live in our home for nine years. We argued and fussed from time to time, but we also talked and shared how much we meant to each other. It was a precious gift of time that could never be measured with a price tag, only an eternal bond that I am honored to be a part of.

I don’t like that he’s gone, but he’s never far from my heart.

Am I ok? Yes, I am a little fuzzy at the loss, but I learned a long time ago we are all born to die. I believe in old souls, and that love lasts forever.

The man who wrote and performed “Rainbow Connection” with Kermit the Frog on The Muppet Show so many years ago also wrote my favorite song, “Old Souls.”

It’s those lyrics echoing in the back of my mind that give me peace and help me be ok.

Because, “All souls last forever, so we need never fear goodbye… A kiss when I must go...no tears...in time...we kiss hello.”

If interested, I will post links to the wonderful songs Paul Williams wrote and are mentioned in this column on my blog page at The Brazil Times. Williams has a vast catalog that I recommend a listen, many of songs will surprise you that he was the man behind the music.

Edited column printed in The Brazil Times on Monday, May 22, 2017

Don’t know how many times I’ve answered that question since my father died on April 25. I understand that people are offering their condolences, and that is so nice of them. I’ve tried to put on my best smile when answering, but a couple of times the facade cracked and I struggled with tears to answer.

See I’ve never been without the grown-up role models in my family to turn to, so this time dealing with death is different. Turns out, I’m now the elder of the family.

Go figure, now I’m the supposedly “wise one.” The thought of that, to me anyway, is hilarious. Can’t help but think that if people really knew the thoughts whirling around in my mind that no one would ask me for advice again.

Don’t get me wrong, being the oldest child in the family has it’s perks. You always are the first to do lots of things while growing up. You’re also the first to fail at a multitude of others. The important part of that is that you get back up and learn from mistakes so you can carry on.

Life has so many unique lessons for us all, and you never know where one will come from.

Television provided an extremely profound moment for me on September 11, 1977, while watching the season premier of “The Hardy Boys and Nancy Drew Meet Dracula.”

Singer/songwriter and actor Paul Williams performed a song that I would never forget; “The Hell of It.” It was so cool that I sought out the album which was from an unusual 1974 movie, “Phantom of the Paradise.” It also featured “Old Souls.”

Provided a Christian background as a child, my mind was and always has been open to finding the comfort of God in the world around me. My faith is a strong part of my being, or my life. But Williams’ intelligent and thought-provoking music impacted on my life. Over and over I played that album, committing the lyrics of both songs to my mind creating my own personal soundtrack. Burning them into my heart and soul to the point I told my family that if I died “Old Souls” had to be played at my funeral.

As I buried my father, the beautiful and haunting lyrics echoed in my mind reminding me that we are all born to die. It’s inevitable. I don’t like that he’s gone, but my mother, grandparents, a baby brother and many other family members are waiting to welcome him home.

My beloved elders are gone now, but they’re never far from my heart.

Am I ok? Yes, this new orphan is a little fuzzy at the loss, but I learned a long time ago we are all born to die. I believe in old souls, that love lasts forever and as the lyrics to my favorite song go: “This love survives the ages, in its story lives are pages… Fill them up, may ours turn slow.”

Guess there’s a little bit of wisdom in us all.