Passing on a second chance? 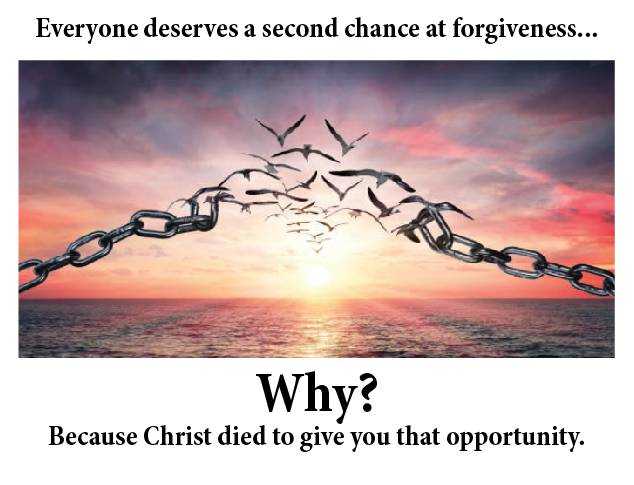 Passing on a second chance?

“Heroes are made, not born...” That’s how I started a June 2017 blog for The Brazil Times. I still believe it today.

It was hard to imagine two years ago I wrote about how everyone is human, prone to mistakes, and true greatness only appears when those same flawed humans use grit and determination to go the extra mile to survive hardship.

The quirky story went on to link the tale about Lifesavers candy to success. I admit to being goofy sometimes when writing columns to create interest for the reader.

Two years later, and I have to admit I wrote that story with a specific person in mind.

I wouldn’t have called this person a hero in 2017 because they had been a tremendously flawed human during 10 years prior. I’m not even sure this person qualifies now. It’s easy to endure punishment when forced upon a person. At that point, you have to do it, nothing heroic about that.

Redemption is also an expected part of the punishment process - you are supposed to learn from your mistakes, and make amends. Although he worked to do learn those lessons, the stigma of his crime against humanity and man’s best friend has never been forgiven. (Maybe it never will.)

However, Michael Vick’s story is back in the news. Numerous petitions are available on the website change.org to either stop Vick from participating as a Captain for the upcoming NFL Pro Bowl or supporting his leadership during the game at Orlando, Florida, on January 26.

“Over the last nine years or so, I have supported Michael and his, I think, recognition of the mistake that he made,” said NFL Commissioner Roger Goodell in a press release Thursday. “He’s paid every price for that. He has been accountable for it. He has worked aggressively with the Humane Society and other institutions to deal with animal rights and to make sure people don’t make the same mistake he made. And I admire that.”

While supporters say “he did his time, leave him alone,” others are still demanding a pound of flesh from Vick’s hide, forever labeling him as “a murderer.”

In 2007, more than 30 dogs were seized in connection with the Bad Newz Kennels located on Michael Vick’s 15-acre property in Smithfield, Va. Vick initially denied involvement.

There was a discussion at the time about professional and hobbyist underground dog fighting rings being located throughout the United States, with estimates of tens of thousands of people potentially involved.

But, in 2008, Vick pled guilty to a federal felony dogfighting conspiracy charge, serving 548 days in the medium-security Leavenworth Federal Penitentiary. (Most first-time offenders do not serve actual jail time when convicted of the crime.)

Many people were horrified by the release of depraved details about the dogfighting ring and the subsequent savage treatment of the dogs. The outrage over animal abuse caused the public outcry to demand punishment. Some people thought to turn Vick loose in the same dog ring with the same emaciated dogs kept ravenously hungry so that they would eagerly attack whatever entered the ring would be an appropriate justice.

People demanded to “let him stay in the same cage,” while others felt he should never play football again. It was a dark and disgusting time for humanity, to say the least, with passions and anger overflowing on all sides. Time did not heal any of those wounds, either. It did not matter that Vick went to jail for his crimes.

There weren’t too many people calling for Vick to receive any type of patience, sympathy, and forgiveness.

I remember thinking if only the American Society for the Prevention of Cruelty to Animals took Vick upon his release to be the face and tell the cruel story of dogfighting to the masses, it would be the biggest publicity campaign ever! Vick would have been uniquely qualified to educate at-risk youths about the perils and consequences involved.

When Vick returned to the National Football League, the complaints lingered. It seemed there was always someone somewhere who would bring up the past if he made a mistake on the football field. It was all over social media every week. One post on my own personal Facebook especially caught my attention. A Christian friend of mine posted a bizarre meme that called for Vick’s public hanging one Sunday afternoon during an Eagles’ game. I sat in shock, staring at my computer.

All these years later and I can’t help but wonder why this continues to be such a heated and disturbing topic for so many people. So much more tragedy and horrific acts not just to animals, but to humanity by humanity itself has happened since 2007.

If I had to think of who would be a hero now, I can’t really come up with one name. (That is terrifying to consider at a national level.) Sure there are many people to point out who do terrific things for others, but they come with flaws - remember they are human. We all are.

The silly thing is this: We know that, but it does not stop each of us from making more mistakes.

Alexander Pope wrote “An Essay on Criticism,” which he cites, “To err is human, to forgive divine. All people commit sins and make mistakes. God forgives them, and people are acting in a godlike (divine) way when they forgive.”

In a way, to forgive, to provide someone a second chance, is a heroic act in of itself.

If society doesn’t have people to fill the shoes of our heroes, then maybe it’s time we take part in a heroic act of forgiveness.

Forgiveness and acceptance should be an integral part of all relationships, families, and our communities. Without that, deep bonds of humanity are not sustainable, and it’s a barbaric and angry slip-and-slide into chaos.

My Grandma Iva used to say you can’t forget the reason for the forgiveness, either. Because if you ignore the “why,” you will repeat the pattern of madness again and again until you learn the important lesson. The problem then becomes how many more people will you inflict that bitterness upon, who then have to go through the same insanity.