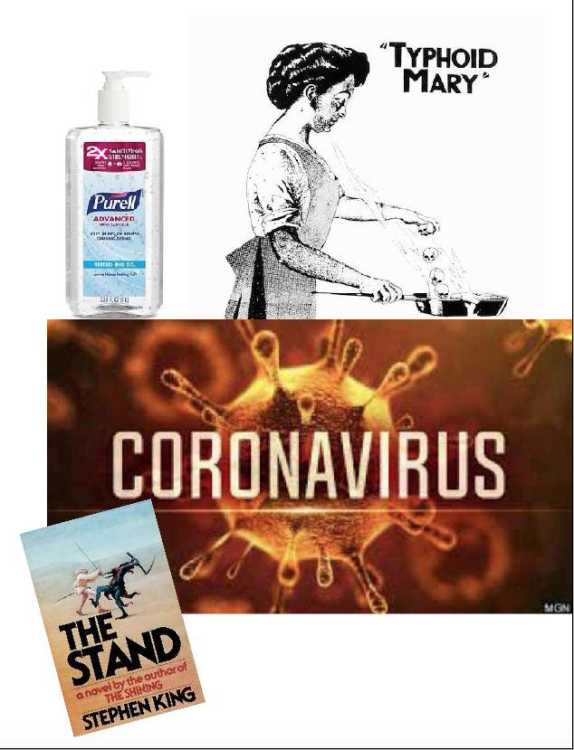 A group of 20-somethings was overheard in the aisles of a local retail store the first weekend after COVID-19 arrived in the Wabash Valley:

“Grab that; it’s the next thing everyone will want when this pandemic gets real to them,” said one of the males grabbing batteries to fill a shopping cart. “We can get like $50 a pack when they realize they need them, and they are gone. God bless eBay.”

This group cackled with laughter as they started to move to another section of the store, when a girl said, “People paying big bucks for Charmin right now, $20 buck for a 4-pack. That generic stuff is going for $10.”

My mind raged with, “that should be against the law,” as thoughts of slapping them in the head were momentarily a genuine possibility.

It’s tough to realize in the middle of an international health crisis a pack of wolves was roaming the Walmart on State Road 46. I won’t say I was shocked by it, but the brazen way they were behaving in front of people, and children, who were genuinely frightened, confused, and just trying to do the best they could was disgusting to me.

Yes, our family was out there in the chaotic of panic, not as Doomsday preppers or hoarders, but it was our regular time to shop. Figured we would pick up a little extra – just in case – but the stores we went to were emptied of cleaning supplies, paper goods, and food. It was like a weird version of Black Friday.

“Can you believe this?” many people greeted us with that question. We seemed to find a lot of people like us, just buying what we needed to get by. We weren’t capitalizing on the fear of others. We shared ideas about other options to pick.

Hate to admit this, but I lost my wallet during the nightmare of the weekend. Luckily, an honest person turned it in to return to the owner. When I picked it up, not a single thing was missing.

Two extremes during the COVID-19 pandemic, the good and the bad of humanity showcased in one event, during 24 hours. That is unsettling to me as a human being.

Being a reporter during this is unsettling in a different way.

IMAGINE: Receive a press release with relevant information, an hour later that information changes, another hour passes and it changes again, and this happens over and over again throughout one afternoon. That is being described as “fluid,” when it’s literally crazy.

While the media is accused of hyping the situation, whipping public paranoia into a frenzy – that might be an accurate assessment for some media outlets – it’s not for this hometown reporter. I love this community and the people who live here – I don’t want to see anyone get sick, let alone die from the Coronavirus or influenza. As adults, we need to keep level heads during this because our children need to see us that way.

It breaks my heart to hear my grandson, three days before his birthday, ask: “I’m not even 8 (years-old) yet; can I die from Coronavirus?”

If you think I am writing “fake news” or hyping this event for some weird reason, then you don’t know me.

However, standing in the middle of this chaotic time, I can’t help but think of a couple of things these past few days.

Mary Mallon was born in 1869 in Ireland and emigrated to the U.S. in 1884. Mallon worked in a variety of domestic positions for wealthy families before settling into a career as a cook. A healthy carrier of Salmonella typhi, Mallon’s nickname of “Typhoid Mary” become synonymous with the spread of disease, as many became infected due to her denial of being ill. Mallon was forced into quarantine on two separate occasions on North Brother Island for a total of 26 years. Mallon died alone without friends, having apparently found consolation in her religion to which she gave her faith and loyalty.

Let’s not be like Typhoid Mary and ignore what is happening.

2 - Did you know there was a flu epidemic that killed more people than those who died in World War I?

In 1918 influenza killed an estimated 50 million people. One-fifth of the world’s population was attacked by this deadly virus. Within months, it had killed more people than any other illness in recorded history. Young adults, usually unaffected by these types of infectious diseases, were among the hardest-hit groups along with the elderly and young children. The flu afflicted over 25 percent of the U.S. population, and, in one year, the average life expectancy dropped by 12 years. (LOOK IT UP - it’s true.)

Stay educated about what is happening so you can take care of yourself and those you love. Follow the best practices for a healthy life: Eat wisely, rest, exercise, and drink plenty of fluids, take our vitamins or medications like we are supposed to do to build up our bodies and immune systems.

PERSONAL HYGIENE - wash your hands. Limit personal contact, especially if anyone is sick.

Hey, if you can’t travel, there’s nothing wrong with staying home with the family - it might help create a stronger bond with each other as people/family/friends.

A story about the total breakdown of society after the accidental release of a strain of influenza modified for biological warfare causes an apocalyptic pandemic, killing off over 99% of the world’s population. (One of my favorite books. I love the character of Trash Can Man and how everyone called the flu “Captain Tripps.”

Let’s be honest: This has the potential to be a terrifying next couple of months for everyone as this virus washes across the planet. This isn’t something that will be resolved quickly within a couple of days. It’s going to be a couple of months of waiting – something our society isn’t very good at anymore – as this works it’s way through our communities.

We are a mobile society - so that is precisely what is happening.

A lot of people are going to get sick, and sadly, many will die. How many no one is sure yet, but the recovery rate is pretty good so far at around (high or low) 90%.

I pray no one I know becomes ill in the anxious days that lay ahead for us all. Honestly, I am scared right along with everyone else. I love my family and extended family/friends. I hope that they all do their utmost best to wash their hands and use preventative measures. I will be washing my hands and doing my best too.

Just because this is happening across the world, doesn’t mean we have to fall apart and go batty.

Is it a nightmare - yes.

Do we need to run for the hills; is the Dark Man chasing us; do we need to find Mother Abigail - no - that was the story in a very great book Maybe you will find some extra time and need something to read - I would read it, but I’m a bit goofy like that.

SOOO... I am coping through this high-stress situation with a little humor.

Remember I told you there were a few things on my mind, well the last one is this:

Can’t help but think, somewhere in Maine, Stephen King is sitting in a dark corner surrounded by rolls of toilet paper, with a bottle of hand sanitizer and a medical mask in his hands while shaking his head incredulously and softly repeating:

Take care, everyone. Let’s breathe in deep and exhale out that anxiety so we can realize our lives will go on, and we will do that together stronger than ever.