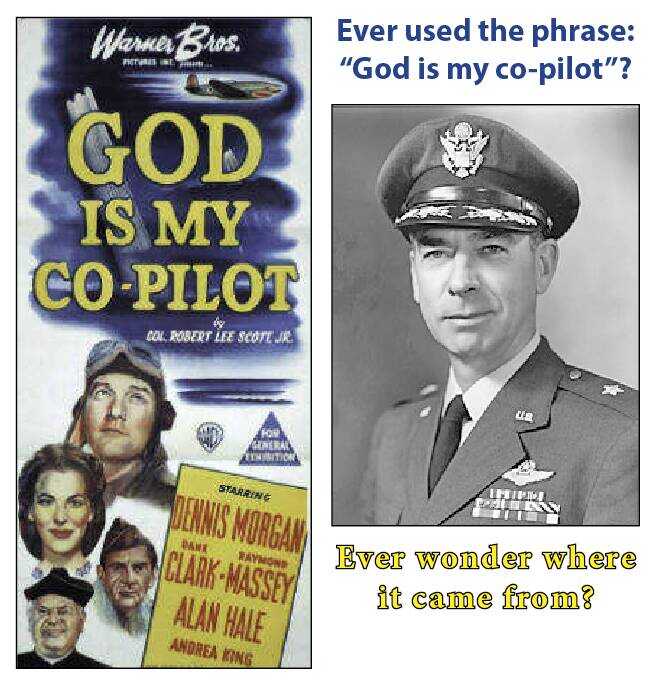 How many of you know and possibly have used the phrase: “God is my co-pilot”?
Ever wondered where it came from?
In 1943, US Army/Air Force Brigadier General Robert Lee Scott Jr. wrote an autobiographical memoir about his exploits in World War II. Scott was an ace pilot - shooting down at least five enemy aircraft - with the Flying Tigers while serving in China and Burma.
It was titled “God Is My Co-Pilot.”
The book was made into a movie by the same name in 1945.
As the story goes...
During early World War II, Scott is considered too old to fly combat missions. However, he is recruited and volunteers to fly a secret bombing mission against the Japanese capital, Tokyo. Although the mission is canceled, Scott convinces the commander of the Flying Tigers to let him fly. Scott engages in numerous aerial combat missions and becomes a double-ace while with the Tigers.
One of Scott’s adversaries is the infamous Japanese fighter ace nicknamed “Tokyo Joe.” During a final battle between the two, Scott shoots down “Joe,” but his plane is also damaged. After several days with no contact from Scott, he is presumed killed in combat.
The commander begins to write a letter to Scott’s widow when there is a commotion outside. A nighttime, torch-lit, gong-playing Chinese procession enters the Tigers’ compound, carrying the injured Scott.
And Scott has “Tokyo Joe” ’s Samurai sword.
So that’s part of the incredible story behind “God Is My Co-Pilot.”
I have a better appreciation for that story and the classic film since Thursday, Dec. 3, 2020.
After a hectic, crazy day with its unique stress, I was almost killed in an automobile accident shortly before 6 p.m.
While waiting at the stoplight at the intersection of U.S. 40 and Franklin Street in Brazil, I had no clue what was about to happen next. The light changed; I looked both ways before slowly crossing the road in my KIA Soul. (That intersection has a history of motorists on US40 running the stoplight, and it’s usually eastbound travelers in a hurry. I’ve seen many do it over the years, so I am extra careful.)
About halfway across the road, a white flatbed tow truck going west on US40 blew through the red light.
Don’t ask me if I know which tow service it was; the vehicle was a complete blur, roaring down the road so fast that it wouldn’t surprise me to learn he was going over 50 mph.
It was inches from my vehicle when I stopped. I looked up to make sure I hadn’t driven through the light; I did say it had been a bad day, right? But the overhead stoplight was red as I watched the taillights disappear into the west.
That type of behavior and driving on a city street is entirely unacceptable.
ODD THING - I would have driven right into the flatbed portion of the tow truck.
I couldn’t help but think, Would I be guilty if an accident had happened?
I had frozen in place as the light turned green. It took me a second, or two, to move my car forward out of the way of oncoming traffic. I apologize to those motorists who were witnessing what happened and my inability to move. But I never heard anyone honk at me.
Won’t lie; the incident scared the living “crap” out of me.
My heart was pounding, my sugar level shot through the roof, I couldn’t sleep, and after I finally got to sleep, I woke up feeling like I needed to vomit.
I had a rough night overall.
Now don’t get me wrong, I am not angry at the driver, whoever they.
I understand they need to be on the scene of accidents, and they provide an essential service to the community.
BUT FOR GOD’S SAKE AND MY FRAZZLED NERVES, SLOW DOWN.
If there would have been an accident, and I was killed - or anyone else in the way of such a hard impact collision - you would feel guilty.
What if I accidentally killed you?
Don’t you have people who love and care for you? People who want you to come home safely.
It would devastate me for the rest of my life if I killed someone recklessly because I was in a hurry.
Please drive safely, someone cares about you, and I am positively sure they want you to come home safe at the end of the day.
I know I was grateful Thursday night that I got to go home safely because “God was my co-pilot.”