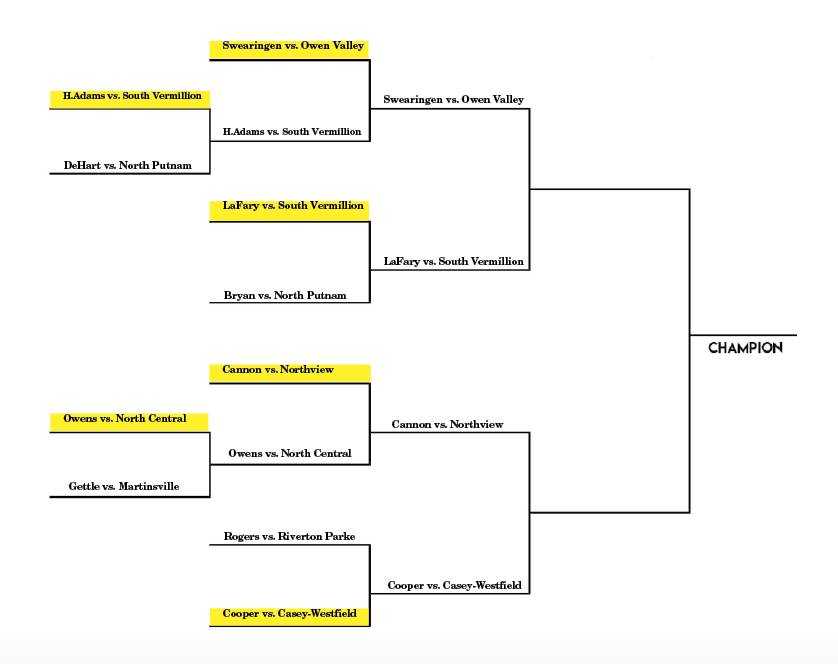 The Elite 8 has been cut in half and we’ve now entered the Final 4 of the Brazil Times Bracket Challenge.

Caleb Swearingen, Jacob LaFary, Caden Cannon and Brevin Cooper each got the highlighter treatment – signifying they won their matchups and subsequently moved on.

Like the first two rounds, you will be able to vote on which performance deserves to advance in the Brazil Time Bracket Challenge via the Times’ Facebook page (Facebook.com/Brazil.Times) as well as Adler Ingalsbe’s Twitter page (twitter.com/ADeez03).

Listed below are the matchups with some background on each performance:

• Northview junior guard Caleb Swearingen scored a career-high 30 points on 10-of-20 shooting from the field, 1-of-3 from 3-point range and 9-of-13 from the free throw line while grabbing six rebounds. He scored the final 10 points of regulation, including the game-tying floater with nine seconds to send the game into overtime.

Note: Winner will take on the victor of Caden Cannon-Brevin Cooper in the Championship on Saturday at noon.

• Clay City senior guard Caden Cannon scored 10 points on 4-of-7 shooting from the field and a perfect 1-of-1 from 3-point range and 1-of-1 from the free throw line while grabbing five rebounds. Cannon ignited a late rally for the Eels, which included a 3-pointer that cut the Clay City deficit to one with just over two minutes remaining. Cannon also put in the game-winning alley-oop with three seconds.

• Northview junior guard Brevin Cooper scored 19 points on 7-of-12 shooting from the field, 3-of-7 shooting from 3-point range and 2-of-2 at the free throw line while grabbing nine rebounds. Cooper sparked the Knights with 11 of his points coming in the second quarter, including three 3s, which helped push the lead over the 20-point mark. He became a facilitator in the second half and helped Northview capture fifth place at the Classic.

Note: Winner will take on the victor of Caleb Swearingen-Jacob LaFary in the Championship on Saturday at noon.