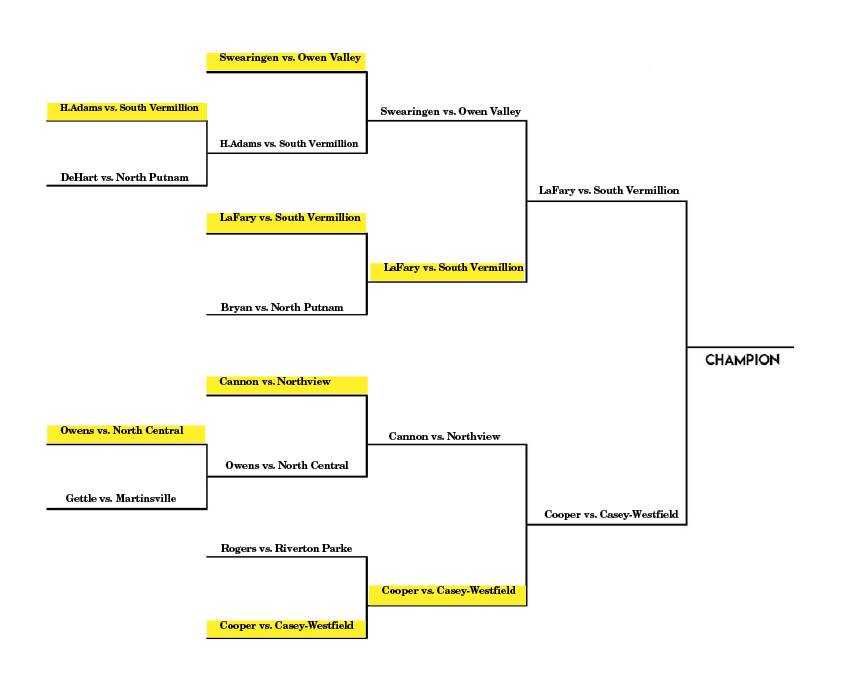 It’s all come down to this.

Jacob LaFary and Brevin Cooper each won in nail-biting fashion to advance to Saturday’s Brazil Times Bracket Challenge Championship, and as they had in previous rounds, each received the highlighter treatment to signify their advancement.

Just as it went in the first three rounds, you will be able to vote on which performance deserves to be crowned the Brazil Time Bracket Challenge Champion via the Times’ Facebook page (Facebook.com/Brazil.Times) as well as Adler Ingalsbe’s Twitter page (twitter.com/ADeez03).

Listed below are the matchups with some background on each performance:

• Northview junior guard Brevin Cooper scored 19 points on 7-of-12 shooting from the field, 3-of-7 shooting from 3-point range and 2-of-2 at the free throw line while grabbing nine rebounds. Cooper sparked the Knights with 11 of his points coming in the second quarter, including three 3s, which helped push the lead over the 20-point mark. He became a facilitator in the second half and helped Northview capture fifth place at the Classic.

How they got here:

• LaFary opened with a first-round bye, placing him in the Elite 8 against Cade Bryan.

He edged out Bryan by a vote count of 406 to 307, pushing him into the Final 4 where he took on Caleb Swearingen.

LaFary, trailing for most of the 24-hour voting window, came from behind as the clock wound down to win a close one by a vote count of 507 to 493, advancing him into Saturday’s championship.

• Cooper opened with a first-round bye, placing him in the Elite 8 against Ethan Rogers.

He edged out Rogers by a vote count of 511 to 411, pushing him into the Final 4 where he took on Caden Cannon.

Cooper led for most of his 24-hour window and was able to stave off a late charge to narrowly win by a vote count of 599 to 594, advancing him into Saturday’s championship.