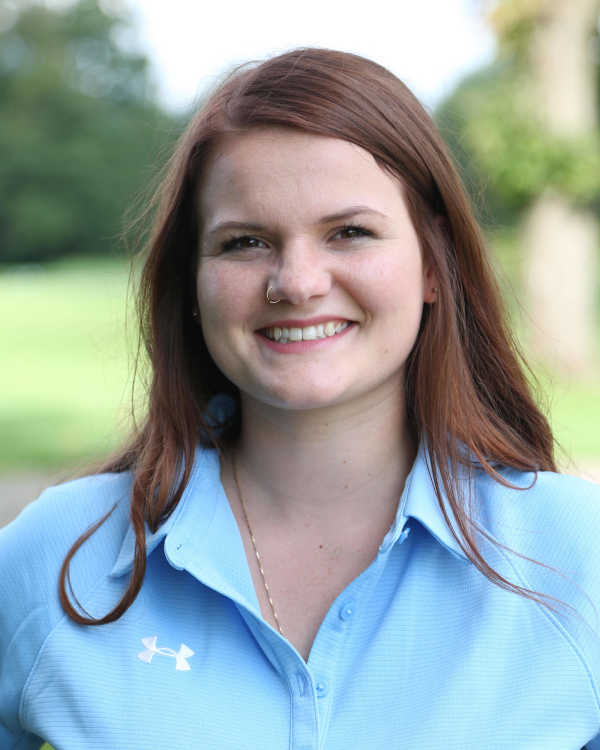 On the second week of March, the Saint Mary-of-the-Woods women’s golf team made the long trip down to Texas to take part in its final tournament of the season at Comanche Trace Golf Course hosted by Schreiner University.

It wasn’t like any typical three-day event, though, especially for Keirsten Mikesell.

Not only was it the final time she would tee it up as a collegiate athlete, it also was near the time the COVID-19 coronavirus started to spread throughout the United States.

Before the outbreak, Mikesell planned to bring her fiancé and young daughter along for the trip, but when things began to get serious, they had to sit down to iron out exactly what they should do.

After speaking it over, they decided to head for the Longhorn State to take it all in, together, as a family, one last time.

“Going into our tournament in Texas, I knew it would be my last one,” she explained. “A few days before, my fiancé and I were questioning if he and our 15-month old daughter should still travel with us or if I should go alone. We decided to not live in fear and still go as long as the team was going.”

Mikesell put up scores of 95 (first round) and 96 (second round) to finish 43rd overall in the tournament – one she described as being ‘bittersweet.’

“Competing was very bittersweet. I was taking in as many last moments on the course as a competitor that I could, and I reminded all of the girls I was playing with to do the same,” she said. “It really all just goes by too fast and for some now, even faster.”

Once the tournament concluded, the Pomeroys traveled home and got back on the course to spend time together, while also rooting on the men’s team that had just gotten its season underway.

But the virus continued to get more serious.

Mikesell said it hit home with her when she got a call from her mom.

“The first thing to close was the school my cousins go to. My mom called and said they were closed for two weeks and I was really in disbelief that it was getting as bad as it is today,” she said.

A few days later, it got even more grim as the NCAA announced it was canceling the remaining winter and spring sporting events.

“Finding out that the NCAA canceled events for the rest of the spring season really was shocking,” Mikesell said. “Although we weren’t competing, we were excited to see how our men’s team would do this season, as most of them are seniors and great golfers.”

As the days passed and the new reality set in that there would be no more collegiate sports for the remainder of the 2019-20 school year, the idea that the athletes that saw their seasons get cut short may be given an extra year of eligibility began to pick up steam.

And on Monday, it was announced that while winter sports would not get the opportunity to come back for another season, the spring athletes would have that option if they wanted it.

With Mikesell playing a sport that takes place in the fall, she was not personally affected by the decision made by the NCAA, but it was one she was happy to see come to fruition.

“When I saw the NCAA’s decision, I was happy that they are making an effort to repair the lost season,” he said. “However, for seniors that are graduating, it makes for a really hard decision.”

Mikesell was not forced to make that hard choice, but if she were, the former Knight would likely have continued down the path of graduating on time, although she admitted it would have been rather difficult.

“I am so grateful I was given the opportunity to get a great education and play the game I love for coach [Steve] Higham,” she said. “Saint Mary-of-the-Woods has been one of the best decisions I have made. They helped me continue my education [and] athletic careers all while [being] pregnant in 2018. I am very excited to graduate, start a career, spend more time with my daughter and get married this fall.”