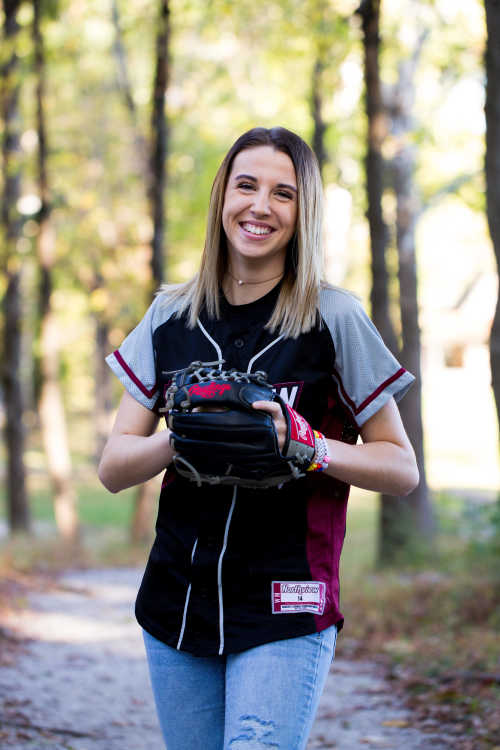 BRAZIL – During the winter months, the Stultz family partnered with Northview Athletic Directors Scott Buell and Bethany Jones in an effort to create the Cpl. Greg Stultz Leadership Award.

The plan was to present it in-person at the conclusion of the school year, but due to the coronavirus outbreak, that wasn’t possible.

However, with the help of modern technology, Makenzie Barger was named the first-ever recipient of the honor Tuesday night.

Alongside her parents, she was presented the award on a Zoom call that also included the Stultz family as well as Buell and Jones.

As the ceremony got underway, the floor was turned over to Zach Stultz, the brother of Greg Stultz.

Zach described what his late brother, who died in combat in Afghanistan in 2010, means, the way he led his football and wrestling teammates during his four years as a Knight and then as a member of the U.S. Marine Corps.

He also spoke about how his legacy will now live on with the Cpl. Greg Stultz Leadership Award.

“What the award means to us, and what it should mean to everybody, is that it’s first off a legacy that will continue to go on. When somebody gives their life for their country, it’s important, no matter the situation is, no matter who they are, that that person be remembered, and that legacy continue on forever. They give that short part of their existence so that we can enjoy our freedom, so they should be remembered forever,” said Stultz.

“As far as the award goes, Greg stood for a lot of things. And No. 1 was giving it everything you’ve got. That included going the extra mile, encouraging, being there for one another, leading a team, being the one to step up and say something when it’s time to say something but also to be the one to step back when it’s time when it’s time to step back. Being a leader as this connotation that you’re the one that’s always standing up, shouting demands and being outspoken, but a leader really means more than that. It’s the time when you need to step back and encourage somebody. It’s the time when you need to be there for somebody when nobody else does it. It comes with so many things that we can’t even put into words. That’s what a leader means and I truly believe that signifies what everything Greg did. I can’t say did everything, but I can say everything that he did do, I truly believe he tried to be his best at it and step up and be a leader on the field.

“Makenzie, we’re proud of you. For you receiving this award, it says a lot about you. That you would be compared to somebody like that and to be chosen in that field of leadership, we think very highly of you, but it also means a lot of other people do too. We congratulate you. We’re happy for you and we look forward to following you in the future and seeing where your life takes you.”

Buell then discussed the reasons why Barger was chosen to be the first-ever recipient of the prestigious honor.

“I think Makenzie’s the perfect choice for the first winner of this award. What Zach was describing there – I had Greg in class several years ago – and I think Makenzie meets a lot of those qualities. She’s been a great leader of our school the last four years playing three sports,” said Buell of Barger. “Unfortunately, she lost softball this spring. They were looking to have a fantastic season and that didn’t happen. That was a tough break. I couldn’t be more proud of Makenzie and what she’s done in just leading and what she’s been through. We’re just proud of her and really excited about her future.”

Barger, who will receive a $1,000 check that will go to furthering her college education, got her opportunity to thank everyone for receiving the award.

“Well, first of all, thank you. And second of all, I’m honored. I feel like I’m in high shoes and it feels great,” she said.

Stultz closed out the ceremony by congratulating Barger for the way she went about conducting herself on the field and court during her four years as a Knight and therefore was more than deserving of being named the first-ever winner of the award that will be given to one student-athlete each year.

“You set the bar for those to come. It is exciting to see, as this continues on, that legacy and who gets to be included into that. It’s obviously going to be very exclusive. It’s once a year for that person, so we’re hoping that this will help spur people on to be a leader and to be a qualifier for something like this,” said Stultz. “Having you be the first one and having you set the bar that high, we’re super proud of you and we’re really appreciate it. We know you didn’t do it for the money, and that’s another very important aspect of it. If we can help the legacy continue and help those young people in their future life who deserve it, then that’s a really, really big honor to us.”

To watch the entirety of the award presentation, visit: https://www.youtube.com/watch?time_continue=676&v=sOh9O43g3bA&feature=emb_logo