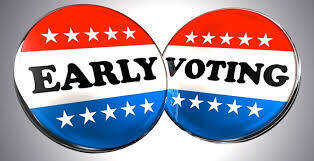 Early voting is thriving so far in Clay County since beginning last week, according to Election Clerk Anola Gallion of the Clay County Election Office.

Long lines of more than 20 people were evident at mid-afternoon on Friday, as voters were taking advantage of the numerous opportunities to vote prior to the Nov. 3 general election date.

“The numbers have been great,” said Gallion, who has been on the job since last November and is overseeing her first general election. “We’re averaging about 200 a day, but the line is staying constant. People are calling in and asking when they can come in and there is no line, and there’s no good answer.”

Gallion has also been making extensive use of the Clay County Election Office’s Facebook page, on which several people have asked questions and received answers since the start of early voting on topics ranging from mail-in balloting, to residency issues to general guidelines on signatures.

“On the daily rate, the numbers are about 50 percent higher than at the same point in the 2016 general election,” she said. “It picked up more toward the end in 2016, but I think we’ll stick more steady than that.”

Through October, voters can cast their ballots in person from 8 a.m. to noon and from 1-4 p.m. Monday through Friday at the Clay County Election Office on the second floor of the Clay County Courthouse.

On the final two Saturdays in October, one additional voting site will be added to the courthouse (see accompanying list).

The final early voting session will take place on Nov. 2, the day before the scheduled general election date, from 8 a.m. to noon at the courthouse.

Gallion said the convenience of early voting can not only help county residents to find a time which meets their schedules, but is convenient in another way.

“It’s all inside, so you don’t have to stand outside if the weather gets bad the closer we get to Election Day,” she said. “You can get inside and stand in the nice, warm courthouse and stay nice and dry.”

Gallion noted the State of Indiana sends out projections for each county in regard to voter turnout, and those projections said the high end of the projection for Clay County would be 6,000 ballots cast out of just under 19,000 registered voters (including mail and walk-in absentee ballots).

On Friday, the county’s total of early voters reached 1,631 after starting the day at 1,382 – marking the busiest day so far.

Gallion could not predict whether the turnout on Election Day would surpass the early voting or not, and many people are habitual in nature.

“A lot of people like to wait until the last minute and cast their ballot on Election Day,” she said. “For some of them, it’s just a tradition.”

While the mail-in voting has been a hot topic of discussion among the presidential candidates, Gallion does not see an issue with that method and was hard-pressed to come up with a scenario in which mail-in voting could successfully be abused.

“We have had two ballots to come in without signatures, and we have already contacted those voters to let them know that they need to come in and sign the ballot for it to count,” she said. “We have another county resident who is deployed in Kuwait, and our IT department has firewalls around the Middle East. Our IT here is great, and I’m glad. We don’t want any foreign interference.

“We have opened up some of the firewalls, but it may not be enough yet,” Gallion added. “I can send him e-mails, but he can’t send me any. We are going to make sure we get his vote to count.”

Gallion is confident in the system, and thinks any notion to discredit mail-in voting is simply politicians trying to sway people to mimic their beliefs.

“I think most of it is political posturing,” she said. “There is such a great system of tracking and checking them in Indiana. I don’t want to go to prison over your ballot. To even get a mail-in ballot, you have to have an application on file.

Gallion said that anyone submitting a mail-in ballot can go online (to indianavoters.in.gov) to check the status of their ballot in a similar structure to tracking a package delivered by UPS or FedEx.

“If something happens to a ballot, voters can let us know and we will either re-issue one or they can go to the polls,” she said. “If my numbers [of outgoing and incoming ballots] don’t match, then that’s on me.”

Ballots are not mailed out unless they have been requested, and Gallion said that signature checks prevent anyone from submitting a ballot for a deceased person or a prior resident not longer living at their address.

“If a signature does not match what is on file, the ballot is placed in a pile for rejection,” she said. “We would then send a letter to the voter explaining why [the ballot was rejected].”

The clerk’s office also gets regular reports of Clay County deaths from state officials, and the voting rolls are constantly updated to reflect those people.

Many of the voting sites for the 2020 general election are the same as in previous years in Clay County, but one involving the National Guard Armory near Forest Park has resulted in a small amount of backlash from people accustomed to voting there previously.

“It’s been a voting site for a long time, but we had the opportunity this year to use the Clay County Fairgrounds,” Gallion said. “The fairgrounds location is two miles south of the armory, and the V.F.W. is only a mile away from the armory – so we felt like in moving that location down to the fairgrounds we weren’t going to cause a major problem because it’s only a mile or two difference.

“There were no voting centers between the armory and Center Point,” she added. “Anybody who lives in that large expanse of there had to drive all the way into Brazil or Center Point. The fairgrounds has a much bigger building and much more parking.”

Gallion said that a few people opposed to the change are possessive of past trends, and are asking why “their” polling place was moved.

Gallion is already preparing for putting signage at the armory instructing voters they can go to any of the eight voting centers in Clay County, including addresses.

“We have put it on the radio, on the state’s website, the county’s website and on our Facebook page,” she said. “We are doing everything we can to get this out there to everyone we can.”

Following are the dates and locations for voting in Clay County: