TOP STORY OF THE DAY, brought to you free by WICU: Relative of county residents to appear on 'Wheel of Fortune' on Monday 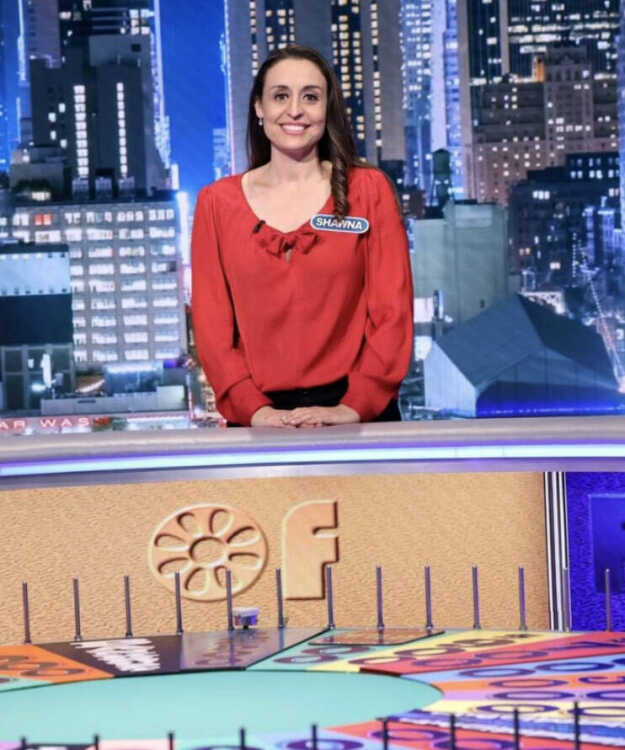 Shawna Perez, who was born in Brazil and has many relatives here, will appear Monday on Wheel of Fortune on WTWO-2.
Submitted photo

Shawna Perez, a single mom and first grade teacher at Miller Elementary School in Santa Maria, California, was born in Brazil before moving to California as a young girl.

During her upbringing, Perez would spend many evenings in front of the television set alongside her grandparents tuned into the latest episode of “Wheel of Fortune.”

So, when an advertisement popped up on the screen a few weeks ago, informing those watching how to apply for an opportunity at getting on the show, she jumped at the chance.

“I saw an ad on my local news channel that they were looking for Southern California residents. I thought, ‘This would be the perfect opportunity. I wouldn’t have to make a trip anywhere. I could just do it over Zoom.’ So, I thought, I might as well give it a shot,” she recalled.

Not too long after the application went through, she got word from the “Wheel of Fortune” producers that they would like to interview her over Zoom.

Perez said just having the opportunity to solve a few puzzles virtually from her home, with her children around her, was a thrill of a lifetime.

“The interview over Zoom was a lot of fun. They had different puzzles to solve. It was a cool experience, and I thought, ‘You know what? I gave it a try and that was cool enough that I was chosen to audition,’ she said.

But it got better.

A little while later, Perez got a phone call from the same producers, informing her that she indeed made the show and would need to drive down to Culver City for the show’s taping.

“When I found out that I made the show, I was just thrilled. I was so excited. My kids were so excited. They were right there with me when I was told and they were there when I auditioned,” said Perez.

“I drove down and spent about 13 hours there the day of the taping. I’m sure it’s a different experience [compared to pre-COVID times], but the people that we worked with and everyone that was playing, it was just a really fun experience. Everyone was so sweet and supportive and excited. It was amazing to meet Pat [Sajak] and Vanna [White]. They were so lovely and just kind. It was surreal.”

Due to COVID-19 policies and restrictions, there was no audience for the show’s taping. But Perez said that made it for a unique atmosphere that saw the competing contestants rooting each other on.

“There was no audience, only the contestants, but that was kind of fun too. We hung out with each other the whole day and then cheered for each other when it was our turn to be filmed,” said Perez. “They were very careful, we were all six feet apart.”

Perez’s episode is scheduled to air Monday on NBC at 7 p.m. E.D.T.

Having family spread out across the United States and in different time zones, Perez said it won’t be possible for everyone to have a virtual watch party, but she will sit down and watch the show with her children and mother.

Perez also noted that she is eager for all of her family and friends to see the show so she can tell them about the stories she collected during her 13 hours on set.

“Because of COVID, to be on the safe side, we’ll just be at home, my kids, Kendall, Grady and Benji, and I, and my mom, Tracy Drake-Coates,” said Perez of how she’ll watch her episode. “I think that I will be on a Zoom with all of my family here in California, but a lot of us are spread out throughout the country, so my family members are going to watch it at different times. I have a really big amount of people in Brazil and Greencastle and my cousin and her kids live in Zionsville, and I have a lot of family living in Texas and then here, in Texas.”

“I’ll be excited once people have seen the episode, so I can talk about what happened and they can tell me what I think and I can tell them what it was like being on the show,” she said.”

At different points of her spinning the wheel or asking to buy a vowel, Perez said was thinking of her grandparents and how they used to watch the show together years ago.

Perez knows they would be proud of her getting to be on the show and living out their dream.

“My grandparents lived in Brazil, and so growing up, I used to always watch “Wheel of Fortune” with my grandma, Katie Drake, after dinner every night. She would just be so proud to see me on TV. And I know my granny, Mary Jo Butts, she would be so excited to have it in the paper too because she used to write for [The Times],” said Perez.