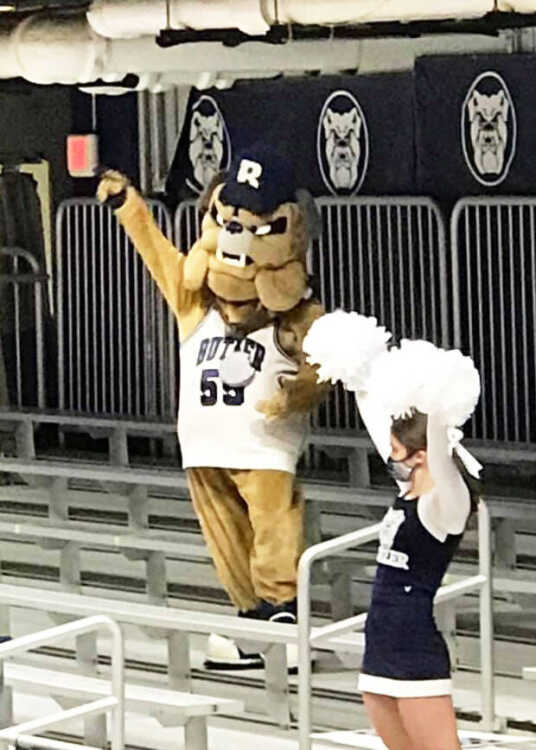 Bryce Minor, a 2017 Northview graduate, helps the cheerleaders to inspire the Bulldogs during a women’s basketball game this season,
Submitted photo

Bryce Minor admits he sort of lucked into his job as the Butler Bulldogs’ mascot “Hink” (named after the school’s legendary gymnasium) during his freshman year.

The 2017 Northview graduate has enjoyed the job, and as his career is winding down this winter during his senior season he admits the final go-around has been different than the first three.

Minor recalls seeing a job opening for school mascot during his freshman year, and decided to apply.

“I needed a campus job, and I couldn’t believe you got paid to be the mascot,” he recalls. “It was perfect. My roommate and I made a bet over a test on who could do better on the test.

“Since I lost the bet I tried out, and it’s the best bet I’ve ever lost,” Minor added.

Minor reached out to the coach in charge of the mascot and found himself among 20 applicants at a tryout session.

“You get 10 minutes with the suit on,” he said, adding that situations were created to see how the applicants would handle certain situations during games. “They asked what I would do if we lost to Villanova on a buzzer beater. You have to ‘break the bubble’ and act really sad with a lot of emotion.”

A week later, Minor got an e-mail telling him he was hired for the position.

A four-year all-Western Indiana Conference tennis player, Minor admits the job wasn’t one he had considered.

“I never thought I’d be a Division I athlete this way,” he said.

Minor said Hink’s suit weighs 40 pounds, but that’s not all he wears when in costume.

“I wear shorts and a T-shirt, and then I have a ‘fat suit’ I put on along with a cooling vest,” he said. “There is a jersey outside of the fur suit. My head is made up of a hockey helmet that has fur on top. I see and breathe through the dog’s mouth. It gets pretty toasty.”

Minor recalls a basketball victory over Villanova last season as one of his most favorite times.

“That’s when you get to go crazy,” he said. “There are no rules or codes. I’m technically on the cheer team, but I oversee myself. You obviously want to stand out.”

Predictably, the suit is really hot.

“The trainers have me to drink about 200 ounces of water six to eight hours before going into the suit,” he said. “You can get dehydrated really fast and lose a lot of water when in the suit. It’s a big workout. I have a new appreciation for the Disney characters at the theme parks.”

Hink doesn’t have to go outside to take a potty break, fortunately.

“I have my own locker room,” he said. “Before the gymnasium got renovated, I was in a volleyball closet. I can just take my head off and relax for a little bit.”

Minor said that Hink is a favorite with fans, when they are allowed to attend games. 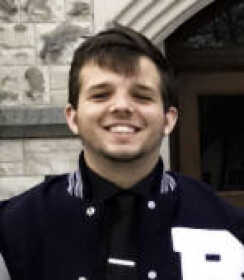 “The kids love Hink,” he said. “I think I’ve taken more pictures than I ever have. I think I’m now prepared for my wedding day.

“At first, I would smile in all the pictures,” Minor added. “Then I realized that ‘Bryce, you’re under a mask and no one can see you smile’ or see your face. Sometimes when I’m hot and toasty it gives me a chance to take a breather when I take a picture.”

Hink works in conjunction with Butler Blue, an English bulldog who is also popular with fans.

“He is, definitely,” Minor said.

Minor nearly didn’t go to Butler, and was in Louisville preparing to sign his paperwork to be a men’s tennis manager on a half scholarship.

He got a phone call that would change his life, informing him of an interview for the Lilly Endowment Scholarship.

That full-tuition award requires the winner to attend college in Indiana, so Minor had to delay his Louisville prospects until he learned the fate from Lilly.

“It was a lifesaver for me,” he said. “Kelli Miller and the staff at the Wabash Valley Community Foundation do a great job. She runs a great ship and reaches out all the time.”

Minor is finalizing his studies with a double major in pre-law and accounting/finance.

He will be attending law school next fall, and is still choosing between Notre Dame, Colorado, Vanderbilt and Kentucky for his next school.

Minor is engaged to marry Rachel Garretson, a Colorado native he met immediately upon arriving on the Butler campus.

“I decided to make a move on the ladies in college, and changed the seating chart around in a class out freshman year to get her to sit next to me,” he said. “We’ve been together ever since.”

Minor worked for six months in New York for Johnson & Johnson the last six months of 2019.

“You never realize how much you miss college until you are gone from it for a while,” he said. “We even missed out on COVID’s arrival. We attended the last college basketball game on New Year’s Eve when Butler played at St. John’s.”

Duties in the COVID era

Minor has only gotten to work at a few games this winter, since fans are not permitted into Hinkle Fieldhouse.

Game work is not the only job of a school mascot.

“A lot of people think it’s just games, but there is a lot of community outreach too,” he said. “I have worked at the NCAA Hall of Champions when they have banquets there, and we are hosting the Final Four this year so I’ll be doing some things there with the mascots from the teams who make it there.”

Minor admits that the popular skirmishes between mascots of opposing teams are choreographed, and is even trained on how to created the most entertaining activities possible.

“We plan all those out, and actually I go to mascot camp every year with mascots from the Big Ten, Big East and Southeastern Conference schools,” he said. “You get thrown in a group chat with the other mascots, and become buds with them. There are all kinds, from some with athleticism to others with no athleticism.

“You choreograph it together like at the first TV timeout I’ll come over to your side and we’ll do something,” Minor added. “You obviously can’t see each other’s facial expressions or mouth words to each other because you’re in a mask. It’s cool to watch games on TV and know who the mascots are from other teams.”

Minor admits he’s not thrilled with his senior year being disrupted by COVID-19, but takes a positive attitude toward it.

“I’m just trying to make the most of it,” he said. “When the sun comes up, there’s no such thing as a bad day. Whenever I get to be the mascot, whether it’s men’s basketball or women’s basketball and a packed house or no fans, I just try to soak it in during my last year. It’s been kind of a whirlwind.”