TOP STORY OF THE DAY, brought to you free by WICU: Simpson remembered fondly for passion, dedication 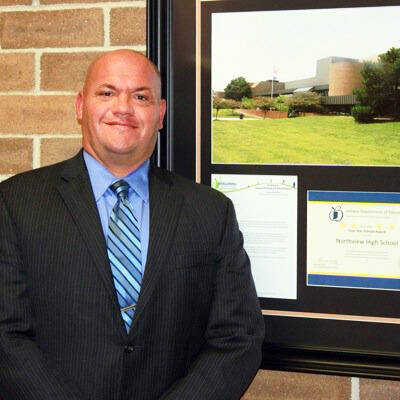 Simpson was the principal at Northview High School from June 2012 to June 2015 before taking over the Human Resources position. He came to Northview from South Vermillion, where he had been an assistant principal from June 2011 to May 2012.

Prior to that, Simpson was a health/P.E. teacher and head football coach at North Vermilion from June 2009 to May 2011.

He was a graduate of South Vermillion High School and Franklin College, where he played offensive line on the football team.

At Thursday night’s board of trustees, Superintendent Jeff Fritz announced that the lights at the Northview football field would be on all evening and all day and night on Friday.

“In this office, Ernie was loved as a family member,” Fritz continued. “And the Northview family took it very, very hard. This has been a very difficult day.”

Athletic directors from both schools gave tributes to Simpson online.

“In honor of Mr. Ernie Simpson our lights are burning,” Northview’s Scott Buell said. “A man that dedicated his life to education, had a passion for football and will never be forgotten.

“He brought a lot to North Vermillion from our character education to just being a good mentor to our kids,” Brown added. “He will be missed. “

Northview physical education teacher Emily Goff had a lot in common with Simpson, and was one of many staff members to express her sadness.

“My heart is breaking...our community lost a great man,” she wrote on Facebook. “I still remember hearing about our new principal. He was close to my age, a former PE/health teacher and coach. I knew we were going to get along and I was right. He was the most caring, supportive principal to the staff and students at Northview!”

Goff noted that Simpson was a regular at school activities.

“I’m not sure he ever missed any type of home event, whether it was an athletic game, band contest or whatever - he was there,” she said. “We always knew what our staff meetings were going to be about because he always sent out an agenda and his power points followed that exactly. My OCD appreciated his OCD! He was so good to my family, especially my boys!”

Goff noted that posts and comments she read about Simpson on Thursday were “all so right” and he had “top notch” leadership.

“The posts and comments I’ve read about him [Thursday] are all so right,” she wrote. “ ‘Make it a great day or not, the choice is yours’ was his everyday saying. Ernie Simpson you will be greatly missed! Prayers to your mom and family!”

Northview football coach Mark Raetz was hired by Simpson, and shares many of the same emotions.

“Just heartbreaking,” he said. “Ernie was such a great person and friend. He loved the Northview community and he loved football.

“He is the main reason I ended up at Northview in the first place,” Raetz added. “Ernie will be missed by many. Our prayers go out to his mother.”

Ben Girton was a football standout at Northview while Simpson was the school’s principal and offers a student perspective.

“Ernie Simpson was many things to me including a mentor, educator, coach and friend,” Girton said. “He was somebody who I always enjoyed talking to no matter if it were about sports, school or work. He was somebody who I believe really cared about each and every one of his students/players and that was shown by his continued support of me even after leaving Northview.”

Girton and Simpson stayed in touch even after graduation.

“He provided me with so much support throughout high school, college and even with moving into the professional world,” said Girton, who graduated from Marian University and is now an assistant superintendent for the Think Crestline property management company in Indianapolis. “He was such a great motivator and left an impact on so many lives throughout his years, and I say this with great confidence. I will definitely miss seeing this guy around and the smiles he would create as well.”