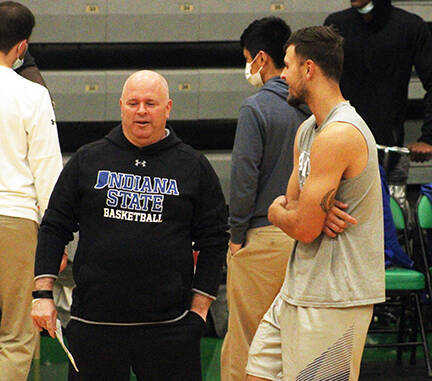 CLOVERDALE — When Cooper Neese attended high school at Cloverdale from 2013-17, the school had homecoming ceremonies twice a year like most schools do.

On Sunday, however, Cloverdale hosted a rare “bonus homecoming” for Neese when the Indiana State men’s basketball team took the floor on Tucker Court for a “surprise” practice in Neese’s honor.

School administrators and family members worked hard to keep the event a secret, and Neese admits he was totally blindsided by the location of the special day.

“We turned off the [U.S. 231} exit from I-70, and I didn’t know what to think,” Neese said. “I thought we might be headed toward Bloomington or something. Next thing I know, we’re turning left toward the high school and I’m thinking ‘no way.’”

Neese was genuinely moved by the gesture from his new head coach, Josh Schertz, who took over from Greg Lansing earlier this year.

“I’ve never really had a coach do something specifically for me like that, and it gave our team a bonding moment and for my teammates to learn a little bit about Cloverdale,” Neese said. “I know coach [Patrick] Rady would do something like that for me in a heartbeat. It was extremely special. I was at a loss for words.” 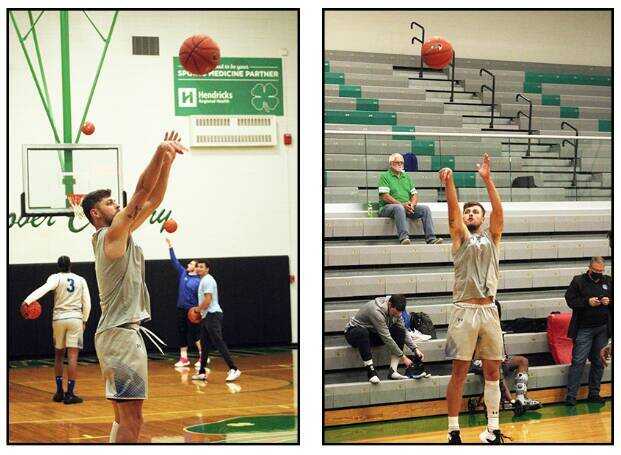 “We pulled up, and they started asking how many were in my graduating class, and a lot of them were surprised to hear that we only had 95,” he said. “Some of them graduated with thousands of kids. It was definitely a culture shock for some of them, but it was really neat and we had a fun time.”

Despite Indiana State’s 15-10 record last year, the school and Lansing could not agree on a contract extension and parted ways. Neese played two and a half seasons for Lansing, and likes the new staff.

Schertz is a former Division II national championship coach at Lincoln Memorial in Tennessee, and brings a light-hearted and fun atmosphere to the program.

“The whole energy level is different,” Neese said. “Every player on the court has a job to do, and has the opportunity to do it and contribute to the team to make us as good as we can possibly be.

“In the last four or five months, I see a lot of improvement not only in my game but in my teammates,” he continued. “It’s been a really fun journey so far, and the whole staff is getting us completely where we need to be to accomplish what we want to.”

Like every returning college basketball player, Neese is looking forward to a return to normalcy on game nights with the return of fans to replace the empty gyms of last year due to COVID-19.

“It was something that none of us had ever experienced, and it was different,” he said. “It was a big shock with no fans, but that doesn’t take away the competitive factor of going out every night. We were still competing against high caliber teams every night, but we’re excited to have fans back to bring some noise.”

Several players departed after last year, some believed to be out of loyalty to Lansing and others just wanting a new home for themselves. More than half of the roster consists of players new to the program.

“I’ll always be optimistic about my team, and it’s going to be fun regardless of what happens,” Neese said. “I’m not the kind to put expectations on a team, but I expect us to be good. We work extremely hard.”

Neese recorded a legendary high school career in which he finished with three sectional titles and 2,496 points — at that time the seventh-best total ever. (He still ranks 10th).

His post-high school journey has certainly been filled with ups and downs, though.

The Indiana All-Star coaching staff was not endeared by Neese’s play in the summer after graduation, and that experience did not go well.

Neither did a short stint at Butler in the fall of 2017, when he departed after a brief stay without playing a game for the Bulldogs.

Neese transferred to Indiana State, and an unfavorable NCAA ruling required him to sit out for three semesters before finally taking the court as a Sycamore at Christmas break in the 2018-19 school year.

It didn’t take Neese long to shake off the cobwebs and adjust to the college game, as he averaged 8.2 points a game while shooting 37.7 percent from 3-point range and 82.4 percent from the line in earning Missouri Valley Conference All-Freshman Team honors.

Neese had solid seasons his next two years, averaging 7.3 points per game as a sophomore and 9.5 last year as a junior.

He’s looking to continue bettering himself this year, and do whatever he can do make the Sycamores into a winning team.

“I’ve been through the wringer and been through some experiences, and it’s time for me to use my ability to lead and do whatever I have to do — whether it’s on the floor or as a leader on the bench,” Neese said. “These last four or five months [with coach Schertz] have brought back a confidence in me that I haven’t had in a long time. This has made a lot of things fun again, and made me fall in love with the game again.”

Neese said he’s a “sponge” in practice, absorbing what his new coaches are telling him.

“They know so much and show much, and using what they do will improve my leadership skills and improve myself overall,” he said.

Neese will graduate in May with a degree in sports recreation/management, which he describes as a cross between “a communications degree, a business degree and a sports world degree.”

Thanks to a favorable NCAA ruling last year, the 2020-21 season does not count on an athlete’s limit of four competitive seasons — meaning that Neese could return again next year to play another season.

“I’ve thought about it,” he said. “I love these coaches so much, and they make me better every day, way better than I ever thought I could be. That’s something I will take into account, but I also know that I want to be a professional some day — whether that’s in Europe or wherever.”

For now, Neese is focusing on his last year of studies, and his basketball rejuvenation.