TOP STORY OF THE DAY, brought to you free by WICU - Neighborhood hero: Destiny’s Story 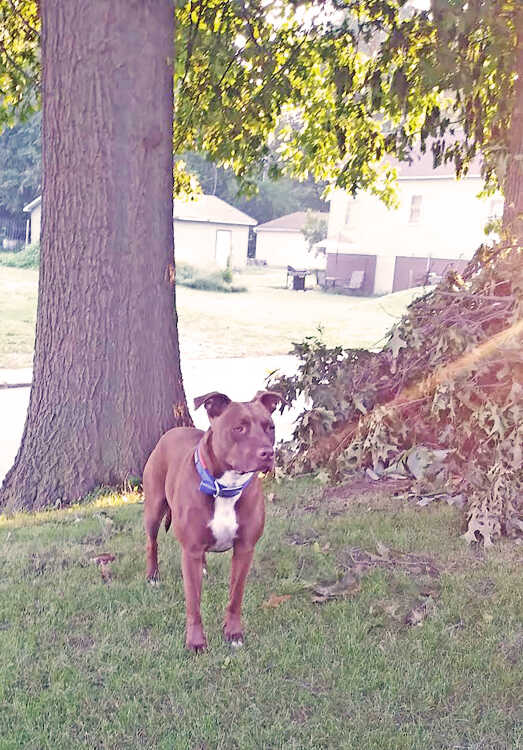 Research has proven how unconditional love from a furry friend is exactly what a recovering cancer patient might need.

That was the reason why Brazil residents Michael, who is in remission, and Jaqueline Mroczek adopted “Destiny.”

But it seems the pitbull-mix is not only an integral part of their family; she has a unique destiny all her own.

“The doctors said Michael would benefit from having a dog during his recovery,” said Jaqueline about choosing to adopt a dog from the local shelter. “I told them we wanted a dog that wanted to be loved, and that would love us, and oh, boy, did she fit the bill.”

“I have to give a huge level of credit to the people at the Clay County Humane Society. Because of their loving care, Destiny is so loving,” said Jaqueline. “Five of the girls there had to say goodbye to Destiny before we brought her home. I don’t know what we did before we got her.”

Jaqueline said Destiny not only took care of Michael, but she also adored her mother, who was living with the family.

“Destiny was right next to my mom all the time. My mom spoiled Destiny rotten,” said Jaqueline, adding it was a sad day when her mother went into a nursing home. “When I got home, Destiny was sitting in the doorway just staring into her bedroom. She looked at me, and she looked in the bedroom like, you know, where’s grandma?”

Jaqueline said many people give dogs who are Pitbulls or pitbull mix a bad rap.

“Destiny is excellent with people, great with kids. When I take her on walks, kids ask to pet her, and I tell them, ‘Yes, she’s very friendly.’ Their nature is to be a good dog, happy and playful. And I think it’s the people that make them bad. Destiny’s excellent. She’s one of the best dogs I’ve ever had in my life.”

During one of the routine morning walks, Destiny did something, well, truly incredible.

“It’s the first thing we do is go when I come home from work. We go for our morning walk,” said Jaqueline. “You know so that she can run and play, and we do the same thing day after day. Her routine never varies.”

However, one morning a couple of months ago, Destiny ran out of the house and ran straight to a home two houses down.

“I thought, ‘What is she doing?’ She never does this,” said Jaqueline, who ran after the dog. “When I got to the house, I noticed she was butting her head against the back door of the house.”

When the door opened, Destiny went inside.

“Oh great,” thought Jaqueline, who was certain the police would be called.

“I was in panic mode,” she admitted to thinking the worst, but she went inside to get Destiny.

Destiny was sitting next to an older woman who lived alone in the home, and they had never met before.

“I thought somebody had broken in and maybe harmed her,” she said but then realized the woman was experiencing a medical trauma. “I’m trying to talk to her and tell her I’ll be right back, that I’m going to get my phone.”

Destiny stayed by the woman’s side, nudging her and licking her face.

“When my husband gets there, Destiny blocked the doorway. She didn’t want him in there.”

The Mroczeks took Destiny home before the EMTs arrived.

“Later, we found out the woman suffered a stroke,” said Jaqueline. “If not found when she was, in 20 more minutes, the woman’s sodium level would have bottomed out she would have died.”

The Mroczeks are unsure if Destiny sensed or heard what happened, but she knew someone needed help.

“We got the opportunity to meet our neighbor when she got home from the hospital. Destiny warmed right up to her and just loved her instantly. It was like she remembered and knew her,” said Jaqueline. “Honest to goodness. she has never gone over or went to that property or the house before.”

Jaqueline believes: Everyone is taught that angels have wings; the lucky ones of us find out they have four paws.

“Destiny has been nothing but loving and happy. And just the best puppy in the world,” said Jaqueline, “I call her my pound puppy. Destiny is doing everything she needs to do.”