Local barber laying down his scissors to retire after 59 years 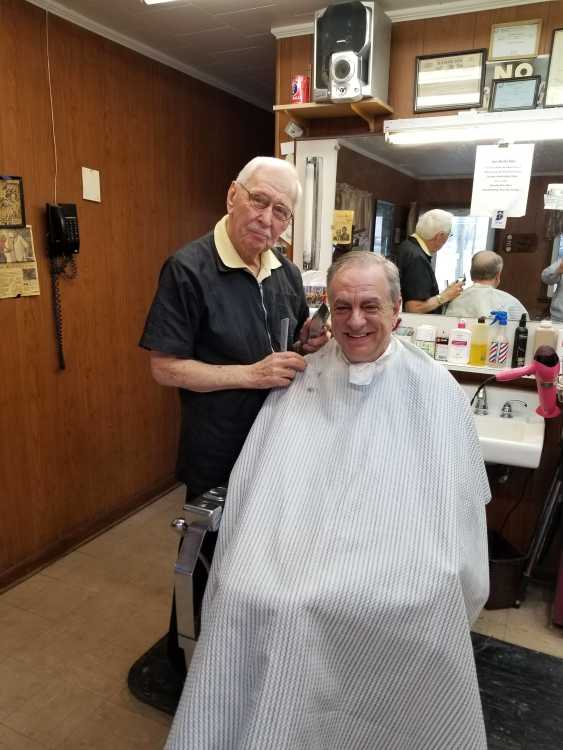 David Thomas gets his hair cut by Joe Holechko for the last time on Saturday. Holechko is retiring after 59 years.

Joe Holechko had two customers the first hour he was open Saturday. Both seemed surprised to hear he was retiring April 6 and both had the same reaction: Who is going to cut my hair?
It’s a decision David Thomas has never had to make in his 57 years. For about 50 years Joe has been his barber. David remembers his mother taking him to have his hair cut in the Davis Hotel on National Avenue. He remembers having his son, Stephen’s, hair cut for the first time by Joe.
David has a picture of that haircut and now he has a picture of Joe cutting his own hair for the last time before Joe retires.
David also remembers when his coach, Bob Lancaster, insisted the members of his team have their hair cut above their ears. Joe did it.
Ralph Allen, whose uncle was a Clay County Commissioner decades ago, has been going to Joe for haircuts for the past several years.
On Saturday, after getting up from the barber chair at Jim’s Barber Shop on the corner of Forest and Jackson streets, Joe embraced Ralph and said, “I’m retiring buddy. You’ll have to find another barber.”
Then Ralph asked the big question, “Who?”
Joe started going through the list of men’s barbers and found there were only two in Brazil he could recall. Many of the barbers who specialized in men’s haircuts quit the business when the long hair styles came into favor during the Beatles era.
At one time there were 8,400 barbers in the state of Indiana, Joe remembered reading.
“Many quit because they hated long hair,” Joe said. “They thought it was sissy. But we had to make a living so we went to seminars to learn how to layer and style long hair.”
Joe went into barbering 59 years ago after a back injury at the tile company where he worked forced him to find a new career.
“My brother-in-law was a barber in Chicago and he said I might try that,” Joe recalled.
So, he went back to school in 1960 and graduated in 1961.
His first barber chair was in Terre Haute before moving to the barber shop in the Davis Hotel. Later, he cut hair again in Terre Haute, moved to a new barber shop near the Clay County Courthouse, and was with Bill Sneddon from 1992 to 2012. For the last seven years he has cut hair at Jim Carleton’s shop. After illness forced Jim to retire, Nick Sears came into the shop.
So, who cuts the barber’s hair? Bob Jenkins cuts Joe’s hair and Joe reciprocates.
Typically, Joe would do 60 haircuts a week; he has recently slowed down after noticing a slight shake in his left hand.
“I don’t want my clients to become victims,” he joked.
The thing he likes most about cutting hair is developing friendships with his customers, like Ralph who lives in Putnam County and like David, who is one of his neighbors.
“I’ve been blessed,” Joe said. “People have been very good to me. It has been such a satisfying experience. I enjoy sharing stories with my customers. I really become close to them, a personal friend, like Floyd and Andy.”
He sees comparisons to the fictional barber shop made famous on “The Andy Griffith Show.”
While Joe praises the community, David said, “He built everything on his own.”
Joe is a man of good morals and good character, David said.
While Joe downplays it. David said he was involved in raising money for the beautiful organ in Annunciation Catholic Church.
Joe is also a man of good humor.
“What am I going to do?” David asked upon learning of Joe’s retirement.
“You might get a good haircut,” Joe replied and both men laughed.