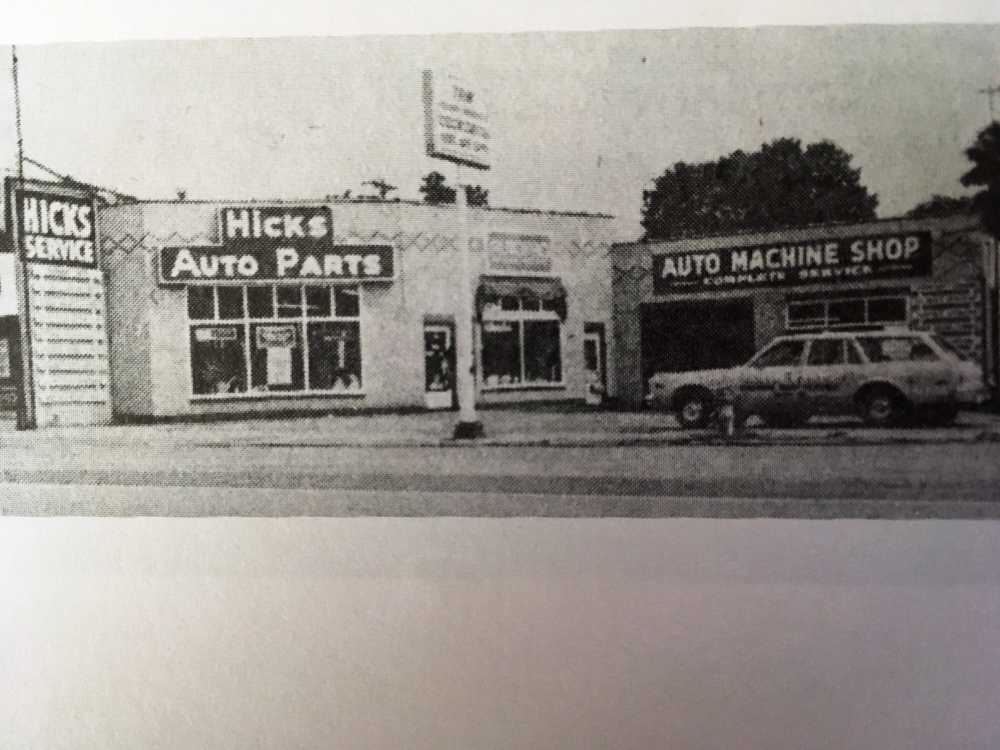 Many changes have taken place in the past half century, but this business has remained constant in its tradition of friendly, efficient, and fast service. Started by Cyril and Mary Hicks in 1921 and continuing in that tradition carried on by their son, Bill Hicks, who took over the business when his father retired.
Bill started working for the company thirty-five years ago, and now his son, Troy, is following in his dad’s footsteps. Troy began working full-time with his dad in 1976 after high school graduation and, like his father before him, is learning the operation by taking part in a little bit of everything.
The store, which opened as Hicks Tire and Battery Service, has been in the same location at 520 West National Avenue, but the business has not remained the same. Several major additions have been added throughout the past few decades. In the late 1930s, the firm started in the automotive parts business. The store’s name changed in 1930 to Hicks Auto Supply and was followed by incorporation in 1970. The office and parts storage were enlarged in 1976. A cylinder head block and manifold surface grinder, a new glass bead blasting machine for parts cleaning, a new disc brake roto lathe, and a new line of “Mr. Gasket” high performance parts were all added. Hicks takes pride in its speedy service. Hicks has the availability of a complete line of high-performance accessories and parts over night from either Evansville or Indianapolis. This covers a complete line of auto parts, replacement parts for all makes of cars and trucks, as well as tractor parts, and a complete automotive, truck, and tractor machine shop.
The machine shop specializes in valve grinding, cylinder head work, complete brake-drum turning, and disc rotor turning form passenger cars to semi-trucks. The shop can also do valve guide installation, starter and alternator work, and engine reboring.
Hicks is proud of offering its many lines of national brand products such as TRW engine and chassis parts, Hastings rings, Fram filters, Wagner brake parts, and Murray air conditioner parts. They also carry AC fuel pumps and plugs and Standard Blue Streak ignition parts.
Bill Hicks does the parts ordering and purchasing. Troy is involved in all aspects of the store, and Bill’s wife, Sue, handles the office work. There is a full-service staff to serve the customers. Store hours are 8 a.m. to 5 p.m., Monday through Saturday.
In 1820, Uriah Hicks, Cyril’s grandfather, walked to Indiana, staked out his land in Jackson County, then returned to North Carolina. He married Clarissa Presnell on April 1821, taking her to the property of Jackson County. Leaving there in 1822, they settled in Clay County, Indiana, near Center Point, making it home. They had thirteen children: Sarah and Prudence, both stillborn, Mary (Nathan Gibbons), Nancy (William Butt), Eliza (Thompson Zenor), Clarissa (John Gibbons), Wealthy (William Ealy), Emily (Henry Williams) and Harrison and Hamilton, dying young, and Harvey, Hardy and Homer.
Cyril and Mary Hicks have two children, William (Bill) and daughter, Ann.