Dr. J. A. Rawley and the Rawley Hospital 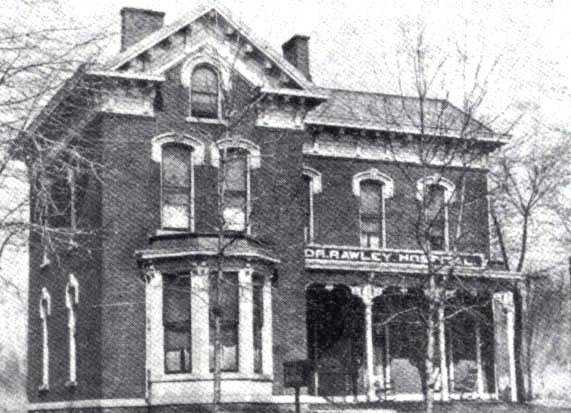 Dr. James A. Rawley, no matter the time of day or night, the conditions of the weather, or the distance to travel, never ignored a call for his services. He never stopped to ascertain whether the sufferers had the money to pay him for his visit; he would drive with all haste to the bedside of the afflicted, anxious to do his part in the relief of suffering humanity.
Dr. Rawley was born on May 11, 1870, the son of John and Nancy Rawley. After James completed his studies in the common school’s education, he attended Northern Indiana College at Valparaiso. He then attended Central Normal College at Danville, Indiana, from which he graduated September 9, 1894. Dr. Rawley first took up teaching and was principal of the Knightsville grade school. At this same time, he took up the study of medicine and later entered the Illinois Medical College of Chicago from which he graduated in 1904. On the first of October of 1904 he moved to Brazil and started practicing his doctoring profession as a physician and surgeon.
Dr. Rawley demonstrated unusual skill in the practice of medicine and surgery, and he quickly built up an extensive practice. Dr. Rawley’s one ambition was to help suffering humanity and in perusing this idea, he planned the erection of a large modern hospital. Just as he was about to see his hopes in the big undertaking, America became embroiled in World War I. He was forced to drop his plans for the time being.
Dr. Rawley was commissioned a captain in the Medical Corps and was stationed at Ft. Oglethorpe, where he remained until the close of the war. With the signing of the armistice, Dr. Rawley returned home to his practice and again took up his fight against death and disease. Dr. Rawley’s practice reached such a volume that he found it necessary to secure assistants and organized a hospital, located at 354 East National Avenue in Brazil. He then hired three other associates, who were specialists in various lines of medicine. The Rawley Hospital was later added to and then increased both in size and in equipment from time to time until it was one of the best private hospitals in the state of Indiana.
On November 16 at 4:00 A.M., a fire was called in to the fire department from the Rawley Hospital. It seems an overheated furnace under the dining room of the hospital set fire to the floor and spread rapidly to the rear part of the hospital; the fire was gaining headway in the front part when the fire department arrived. All the ambulances in the city were summoned. None of the patients suffered any ill effects, and the hospital was repaired.
Dr. Rawley died from injuries sustained when he was run down by a Pennsylvania passenger train. He was in a daze when he told attending physicians at his hospital, “I’m done for this time.” He died on May 17, 1923.
Then in September 1923 Rawley Hospital was converted into the Community Hospital. In about 1960 they tore the hospital down.
Submitted by Rhonda Tincher, Clay County Genealogy Society, Center Point, Indiana
Sources: Family Files at Clay County Genealogy Library in Center Point; Brazil Daily Times, November 16, 1916; September 26, 1923; May 18, 1923; November 25, 1960; and article by Pat Wilkinson “Hospitals Serving Clay County.”