‘Look Back’ brings back memories for local woman 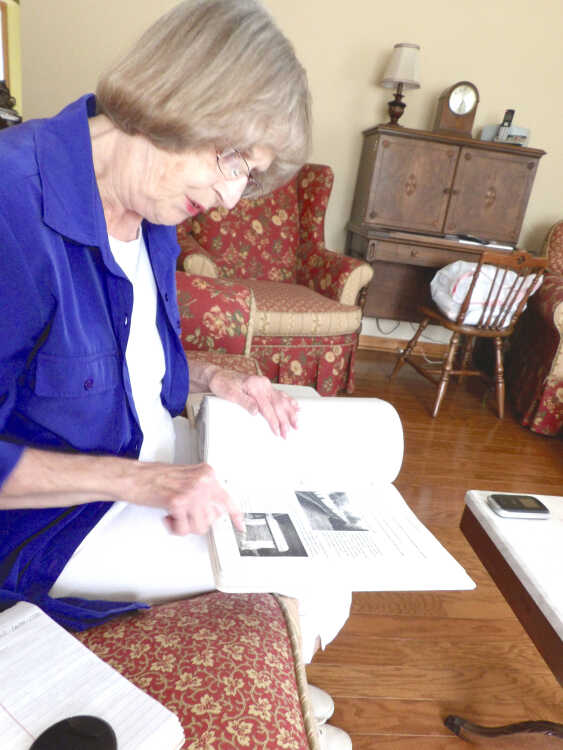 Susanne Huber reads up on her family history album to learn more about the exploits of her mother Dorsey Carpenter.

Every family has that one relative who has told a tall tale or two that were a little hard to believe, that is, until someone or something comes along that gives it validity.

That’s what happened to Suzanne Huber, 85, of Brazil, while reading the Look Back feature in the Monday edition of The Brazil Times on Sept. 26. It showcased a glimpse back at the news going on during the week of Sept. 25 to Oct. 1, 1921.

“It was right there in black and white,” said Huber about the very first section in the column about Carpenter Construction Company agreeing on a financial settlement to the family of a Greencastle man killed in an accident on West National Road. “We know of it as State Road 340 now, but back then it was part of the National Road. My grandfather, Harold Aubrey Carpenter, owned that company and was paving that section of the road for the first time.”

According to Huber, there’s another reason why the small article got her attention.

“My mother, Dorsey Carpenter-Keever, used to tell our family a story about that, which was a little hard to believe,” Huber said. “You see, my mother would do just about anything.”

The story goes something like this: Apparently the man was killed by a warning cable strung across the roadway that he didn’t see while driving down the road. As grizzly as it sounds, the man was decapitated during the accident.

“My mother just didn’t believe it happened that way,” Huber said. “She kept saying ‘he would have ducked.’”

While most people would have let the matter slip, apparently Dorsey, who was 16 at the time, set out to prove she was right with the help of a friend named George. The two took off in his car, heading to where the accident happened and roared down the road towards the cable.

“She always said, ‘If he’d ducked, he’d never been killed,’” Huber said about the duo who both lived to tell the story about the road cable. “My mother told so many crazy stories about back then, she was such a hoot.”

Dorsey apparently admitted to always being into mischief as a child; like the time she joined her siblings — sister Helen and two brothers George and Sam — in greasing the interurban tracks in the Cloverland area as a prank. Being raised in a time when “children were seen and not heard” Huber said her mother was intelligent and ahead of her time as she graduated high school, went to classes at Indiana State University, then off to St. Mary’s of the Woods and finally went to a school for girls in Chicago where she sang on the radio.

Dorsey married Frank Keever, who was a Firestone Tire manager and a World War I pilot, and were blessed with two children, Suzanne and her sister Jane.

Dorsey was also the first resident at Cooper Towers when the doors opened.

“She lived a bold life, where nothing scared her,” Huber said. “It was so wonderful to read in the paper that one of the ‘stories’ she told about her life, which I often wondered if it was real, really was. To relive the memories again was wonderful.”

To share them with me one afternoon at Huber’s home was a great experience for me too, which I hope you enjoyed as I shared them here with you, with her permission.

If you have an interesting story, or know someone with one, let’s talk about it. Contact me by email at missivy1964@gmail.com, on my Facebook page or by phone here at the office at 812-446-2216 extension 234.