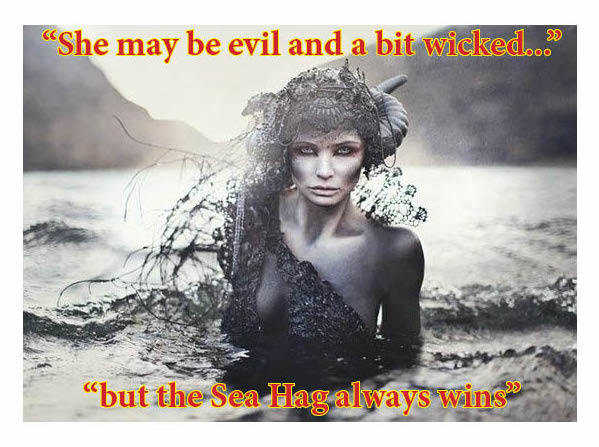 This meme could have been made by my son a few years ago. It captures our family story about the "ye old sea hag" so well.

At 53 years old I have hit an unexpected milestone.

I’m not talking about who gets what from the estate. That never mattered much to me while growing up and matters even less now.

Things are replaceable, but people and the relationships, love, and security they provide are irreplaceable. Priceless.

You never think about the end of anything happening when you’re a child. With life all fresh and new there’s always something to do and experience, why worry about the ending?

Humans don’t often ponder the realities of death. Like so many other people, I always knew growing old and death is a part of the process of life. But there was plenty of time to worry about it later.

In April 2017, my father died. It’s unsettling to realize you are the oldest person in a family. That you are now the elder.

Unexpected moments like that can rock a person to their core.

Life’s big truth is there have to be good and bad experiences.

How could a person appreciate the glitter of stars, fireworks or the simple lightning bugs if there wasn’t a day filled with sunlight, blue skies, and butterflies?

Thunderstorms can be incredibly scary no matter when they happen. Yet, ever watched the lightning spread out across the night sky as one approached? Ominous, yes, but there’s an awesome beauty in the power of Mother Nature that’s not visible in the daylight. Even heat lightning has its own grace as it dances across the night sky.

It’s the same with the routine of life. If all our experiences were good, why appreciate the same old humdrum, boring albeit good thing day after day throughout a lifetime?

The realization of becoming a matriarch of a small tribe caused me to reel back on my heals for a moment.

My first thought was, “Who in their right mind would seek my advice?”

Many times someone has said I was “not quite right.”

I’ve been called “Pollyanna” many times because of my optimism and how I try and find the good during even the darkest of moments. I try to keep a cheerful attitude as much as possible.

When my teenage son got miffed a few years ago and called me “ye old sea hag” in front of everyone is one of those times.

There was an audible gasp as his friends looked for the nearest escape route. Even my daughter took a step toward her bedroom door, wary of what would happen next.

As a family, we were experiencing some really tough times, struggling with an emotional situation that none of us wanted to experience, but we were in it together. As a parent, I probably should have gotten mad and punished him for the rare outburst of temper.

But, after a moment I broke up laughing. It was funny.

What can I say? He could have fired off a litany of curse words like people often do these days. His friends, experts at cursing behind closed doors, were standing right there, but he didn’t do that. He quoted a line from a classic movie to make his point.

We all laughed that day. We needed it more than I think we realized at the moment.

Years later, we still laugh about it. Strong and filled with joy and love our family is like every other. There are rough spots from time to time, but we are family. I’m proud of my little tribe and the part I get to play in it, even if it is the “ye old sea hag.”

Other parents shake their heads in disbelief when they hear the “sea hag” story: Guess they won’t seek any parenting tips from this elder in the future, eh?