Don’t speak unless you have something good to say 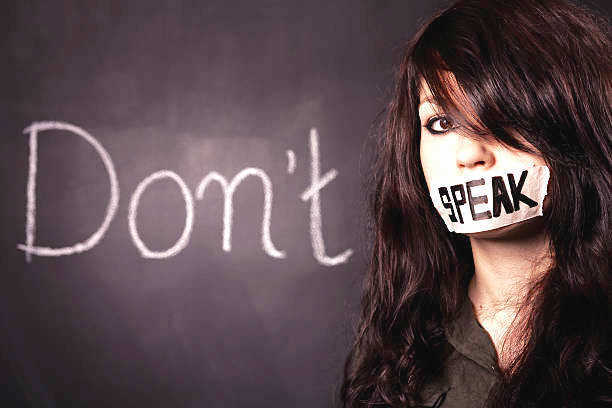 Don’t speak unless you have something good to say

I prefer to sit in a booth at a restaurant. That way I can enjoy the evening and dinner with my husband, or whomever I’m out with. My reporter’s instinct to eavesdrop doesn’t kick in with a booth.

However, a few weeks ago, we were seated at one with low sides. Might as well been chairs and a table. I could see everyone, and that’s not good for me.

Another couple was seated on the other side within a few minutes. The waiter came and took care of them first and then spoke to us. We didn’t mind, the conversation was lively between us.

The soft drinks arrived for both tables at the same time, along with our salads. The other couple placed their order first, and then us.

For about 10 minutes, it was a beautiful night.

When my husband excused himself from the table, the horrors of humanity came into clear view.

The couple received their pizza, not the appetizers. The male was, shall we say nicely, extremely loud in expressing disappointment at the incompetence of the waiter.

The waiter, who was holding our appetizers in his hand, was trying to explain the trainee in the back input the order backward. It would only be a few minutes more, and it would be resolved. The man demanded to know what the waiter was holding, apparently, we had ordered the same thing. Won’t lie, I would have completely understood if he just sat the plate down and let them have it. At least the man would have stopped the foul harassment he was spewing forth. Explaining it was for another table was, needless to say, not what the man wanted to hear. The woman was eating like nothing was wrong with the very contemptable situation that was filled with enough foul language that I thought it was offensive.

The waiter placed the appetizer plate at our table and continued to do his job. The smile couldn’t hide the anxiety on his face or the tone in his voice as he said our pizza was coming.

Indignant at the injustice of poor service the man was loud enough that about 20 people sitting in the area could hear it. He growled at other staff members, he interjected his opinion to other customers about how this was the worst thing that could happen.

When my husband returned to the table, everything quieted down for a while.

I watched and eavesdropped on the man, who was eating the pizza, and calmer ranting fell on deaf ears of his companion.

When the waiter returned with our pizza and the appetizers for the other booth, he started again. It quickly became apparent that the manager and the wait staff tried to do whatever was necessary to quiet the situation the man just kept going. At some point, a glass spilled, and when the crew tried to clean it up, he informed them it was their fault - the glass was too dirty to hold. This is about 20 minutes into this debacle, and it was the first time stained glass was mentioned.

I think he just wanted to hear himself like he needed to keep stirring the pot of discontent for his own entertainment. (I don’t care how bad your life is, a person shouldn’t act like that.)

Three families with young children asked for “to go” containers and left because of this behavior. Another family asked to be moved from the area before their food arrived.

As we ate, I kept watching the couple. So much so, my husband asked what I was staring at. He has a way of tuning things out. At that moment, I was so upset, there wasn’t a way I could talk without starting an argument with this obnoxious man only a few feet away from me. I was upset for the business that this man’s terrible behavior was making an impact on.

Let’s call it as it is: Some of those people will not return after witnessing that.

Society has apparently run amuck in this technological world where everything hinges on the perfect social media presence, but in the real world, people are failing epically. Ethics appear to be a thing of the past for many, and social graces simply are out the window.

Won’t lie, I struggled with what to do, how to help make this better. The little voice in the back of my head wasn’t really being very helpful, as it wanted to scream obscenities at the man. I can speak “filth” too. To yell at the man meant I stooped to his level of excellence and would make the situation even worse. While it was an attractive thought, in today’s world, you don’t know what type of crazy you are going to face at any given moment. I didn’t want to incite a monster.

Thank God, I have a stronger voice in my mind that said no, and proffered a different tactic. A quiet whisper guided me to a better solution.

“Do you have a dollar?” I asked my husband, who wasn’t quite sure what was happening. “Left my purse in the car.”

While he was lost in some confusion, I grabbed the pizza box and went to the checkout counter. My husband right behind me.

“Excuse me,” I said to the waiter, who was red in the face and a little shaken up from the experience. “I wanted you to have this. It’s not much of a tip, but it’s more than that man will do. I just wanted you to know the world isn’t completely full of crazy people. Some of us appreciate the efforts of others who are working and doing their best, even when life isn’t going right. I’m sorry for what happened.”

The young man stood there looking at me as the manager stepped up next to us. She said I didn’t have to do that, but I held the money out to the young man.

“You are a good waiter, and probably a good person. A lot of people wouldn’t have continued to smile while waiting on someone yelling like that,” I said as he took it. “As I said, it’s not much. I wish it were more. Call it combat pay.”

He smiled at us, admitting it had been a hard night.

“I had a flat tire on the way to work tonight,” he said, his voice wavered for a moment. “Using my tips to get a new tire, and this just now puts me over the amount I need. Thank you.”

If I had a $100 bill, I would have given it to him right then, but I don’t have money I can just hand out to others.

We’ve returned to the restaurant since that night, and the same young man waits on us or stops by our table just to say hello.

He’s a promising young college student who that night was considering quitting the job that he’s had for five years. He struggles financially too but told us the $1 bill has a special place now. Apparently, it’s hanging in the break room with a sign that reads: “No matter how much you think life sucks and you’re going to quit because people are horrible, don’t. Here’s the proof there are good people in the world.”

Sometimes in life, the chaos is a thundering roar in our minds. But if we would only listen to the quiet whispers, not only can we help ourselves calm the storm of chaos, we can help others struggling through it too.