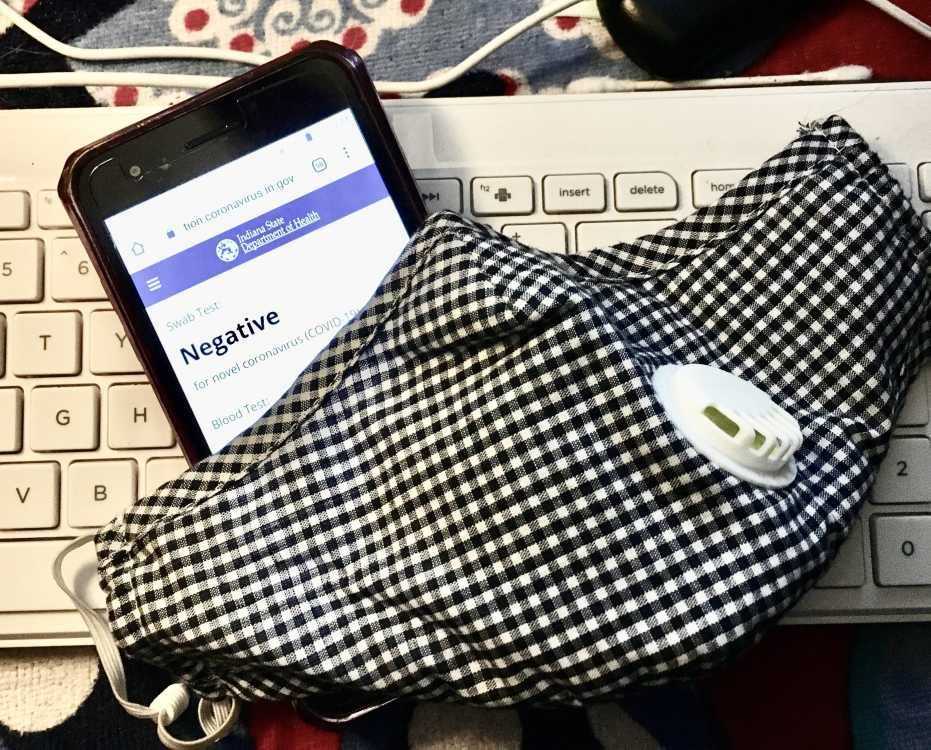 IVY JACOBS PHOTO - Ivy Jacobs’ face covering was received from an anonymous benefactor a couple of weeks ago, and it’s come in handy to the reporter during the COVID-19 pandemic. Pictured on her keyboard is the cellphone showing the test results from the Indiana State Health Department and Clay County Health Department’s recent free COVID-19 test site at Forest Park.

As a child of the 60s, the adults were concerned about proper growth into an adult that required knowledge of a few things, including, but not limited to safety, good health, and manners:

“You have to look both ways before crossing the road,

“You’re not supposed to put anything bigger than your elbow in your ear, and

“You’re not supposed to pick or shove anything up your nose.”

It seemed all my friends had heard these things from the adults in their lives. However, the adults in my life were a bit more peculiar in the way they wanted to drive home the impact of the simple tips, or “lifehacks” as they are known today.

“Please check your shoelaces before crossing a street. I don’t want to have to look for those new tennis shoes because a truck or car knocked you out of them when you walked out in front of it.”

They also liked the word “Ditto” a lot. I would be given some wisdom from my mother or grandmother, and my father or grandfather would get “Dittoed,” which didn’t seem appreciated very well. I got the humor of that years later as an adult in a meaningful relationship.

They seemed to have one prudent saying to cover ears and noses, though: “Don’t poke anything in your ear or nose - because you’re going to deflate your head.”

That frightened me as a child, but I realized as a teenager, it was another bit of humor about being an “airhead.” I shared that joke with my two children, and I had heard my daughter repeat it to Boogs when he was younger.

However, recently I couldn’t help but think that while waiting in line at Forest Park to be tested for COVID-19, described as “a Q-tip shoved up your nose until it scrapes the back of your head.”

I deal with sinus issues and allergies on an annual basis, and the thought of that was not exciting. Your mind can play a lot of tricks on you.

What do I do if I sneeze? Will the Q-tip get stuck up there? Being a woman over 50, a sneeze is not always my friend. What if that sneeze really is a bad one?

I was nervous about the test. However, being out working during this pandemic, I felt it was essential to take the test and know the black and white truth. Being in the high-risk category, I have done my best to take care of my health. When a doctor tells you the state of your health is life-threatening, and it’s time for MAJOR changes if you want to stay alive, you do your best to do just that – stay alive. I haven’t spent more than six years struggling to do just that so I can live to see grandchildren grow up, to enjoy marriage, my family and friends, my career, my writing. The simple yet meaningful things of life.

Every time I coughed or sneezed this spring, I couldn’t help but wonder privately, “Do I have it?”

Yes, there would be an answer for me, but it also provided a “snapshot of the community” for research by the scientists. While I am not scared or anxiety-ridden by the COVID-19 pandemic, I have taken it seriously. I know I don’t want to get sick, and I don’t want to be the reason someone else gets sick.

So, I sat in my car with my mask on waiting to pull forward in the line and possibly deflate my head. Logging in for the free test was easy enough. I held up my driver’s license, answered maybe a dozen questions, gave them my phone number, and pulled forward. The incredibly nice man with the iPad told me the results would be ready probably in 72 hours, but it could be up to 5 days because of the weekend holiday. About two minutes later, my phone buzzed with the message I was booked in for my test appointment. Another two minutes the phone buzzed again, the message was my test was done, and thank you for participating.

“Well, that was easy,” I thought, and considered the option of turning left to leave the park instead of right to the test. Won’t lie, I almost turned left. But seeing the line had grown to like 20 cars behind me, I turned right.

Did that make me a sheeple?

The Centers for Disease Control and Prevention explains the nasal (or nasopharyngeal) swab testing process as being slightly uncomfortable but not painful. Well, I got intrigued by watching the woman in the car in front of me take that test like a trooper as the medical personnel – fully garbed with a shield, N95 face mask, booties on their shoes, and wearing gloves – used that Q-tip. It didn’t seem that big, and the test was so quick; there wasn’t time to consider if I was following the herd.

She drove off, and I was waved forward. I admitted to the man who came to my car holding my text kit that I was nervous. I swear the Q-tip in my test kit appeared to be bigger than the one used in front of me. He explained the procedure and told me to take my time, and it would be alright.

It’s nasty, I know, but I have picked my nose a few times in my life. Even shoved a Q-tip up there a time or two. The first sensation was smelling a faint alcohol scent in my nose on the left side. Then I felt the Q-tip squish into my sinuses, which was, well, icky. As it was swirling around, I couldn’t help but pull back from that. The tingling brought about the urge to sneeze as the swab was removed.

I wished I had not drunk coffee before the test at that moment.

“OH, thank God that is over,” I said as my eyes watered slightly. That’s when I found out that the swab was now going up the other side of my nose. I could hear my Grandma Iva’s voice, “In for a penny, in for a pound.”

The thought that my head hadn’t deflated crossed my mind. I thought Boogs would think that was funny when I told him later. So I turned my head and up went the swab. That icky feeling wasn’t better the second time around. When the swab was out, I was grateful it was over.

It didn’t hurt, a little uncomfortable, but it was definitely an icky experience.

I drove off to get out of the way for the next car. Parking in the lot by the Cow Palace/Pavilion, I blew my nose. By the time I threw away the Kleenex, the icky was over.

When my husband asked what it was like, I told him straight up. The next day, I drove him to Forest Park for the test. It took all of 10 minutes.

“Well, I feel a bit violated after that.”

We laughed together, but that’s our sense of humor. We both agreed about the icky part and also agreed if the antibody test were offered, we would retake it. We both want to know. For us, there’s comfort in knowing.

My results arrived Saturday – The text from the Indiana State Health Department provided a link, I typed in my code, and up came the results, “Negative.” I am still wearing my mask, washing my hands, and social distancing. Doing my best to stay healthy, while making sure I don’t present a problem to anyone else should I be exposed to COVID-19.

BY THE WAY: When I told Boogs about the test later, he giggled that my head didn’t deflate. But the best moment of being tested happened next: “You were negative?” Boogs asked me. He’s been scared by this pandemic in many ways, and mostly has become distant around people, there haven’t been genuinely great hugs for two months, no kisses hello or goodbye. It’s been tough for him, and honestly, me too.

“Yes, I am negative. You know what that means, right?”

I watched his eyes smile, “Yes, Nanny, I get to really hug you now.”

Things got even better when I got to kiss my grandson goodbye through our face coverings, of course.

That wonderful and wise little man who holds my heart then adjusted the face-covering he wears – one I gave him – “I wear mine to keep you safe because I love you, Nanny.”

Ditto Boogs, all I can say is “Ditto.”