At war for 150 years: The Kudzu Battle 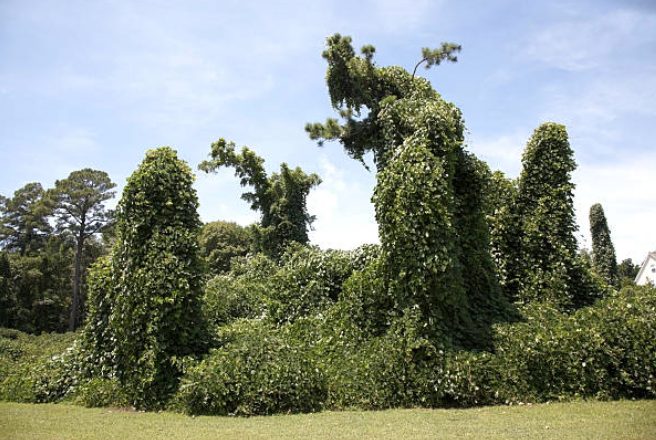 Boogs head was in his computer game when the batteries died.

“Can I use your phone, Nanny?”

He’d been playing since he arrived at our house, a couple of hours.

“Why don’t you look around outside?” said my good-natured husband, driving us to Terre Haute for dinner. “You never know what you will see.”

“Yeah, right,” said Boogs as he propped his head on the van window, disappointed. “I will just take a nap.” He mumbled. Being bored is not something Boogs does well.

“Hey, Boogs, do you know about the war?” I asked while my husband gave me a curious look.

I wasn’t surprised by his answer; Boogs is a very smart boy.

“Well, that is happening; I am happy you are aware of the world,” I said, noticing y husband was looking at me even harder, trying to figure out where I was going with this conversation. “But I didn’t mean that one. I meant the war going on outside your window.”

Now I had Boogs attention and Poppys(What Boogs calls my husband.)

I asked Boogs if he knew what an invasive was. He didn’t, so he asked Poppy.

“Do you know what she’s talking about?” he asked my husband, who explained it’s either when a person, animal, or a plant invades the space of another.

Boogs and Poppy were both giving me a look of “Are you OK?”

I tend to not be in the right mind sometimes ... lol

I had my faculties that day.

“Well, if you look out that window, Boogs. You will see one of the greatest battles in America right now,” I smiled at his staring out the window with a new interest. “And we are not winning the war.”

I explained that most of the plants were being invaded by Kudzu.

Kudzu was smothering the ecosystem in the area. And nothing - Nothing - will stop it from squeezing the life and hogging all the sunlight. He was looking at biological warfare while driving down the road. (Take that Plants vs. Zombies video game.) All around the edge of the woods, outside our van, and along the road were being attacked.

Kudzu has been swallowing the United States since it arrived in 1876. It has an epicenter in the south, about the size of 50,000 baseball fields per year, occupying an estimated 3,000,000 acres of land. Kudzu can grow about 60 feet a season, about a foot per day. That doesn’t sound like much, but I didn’t tell him that part.

It’s not very interesting or scary to see a real Godzilla and find out he only moves a foot a day! Back to video games.

“Can you cut it down?” Boogs asked while trying to point the plant out.

“Yes,” I said. “But you have to remove the Kudzu plants because they begin rerooting and will grow again.”

“Like Zombies!!” Boogs was fully involved in the story now, and so was Poppy, who agreed with me.

“Can you eat it?” Boogs asked, now turning around in his seat to look for Kudzu.

Apparently, yes, but I don’t think many people do.

“Could they plant it in the desert to help feed people?” Boogs said, which made me and Poppy very proud.

The three of us talked about Kudzu invading America for over 150 years, and it was still rampaging onward.

I let Poppy tell him about goats, but Poppy said it would probably take a goat the size of Godzilla to do it.

“Goatzilla,” Boogs laughed, then posed a serious question. “How did it get here? I mean, who brought it here?”

“Like all things humans are involved with, the best of intentions brought Kudzu to America,” I told him about people thinking Kudzu would help solve soil erosion, but it didn’t work as intended.

No matter how carefully we make plans about something, misfortune or accidents might still happen to cause mild or heavy destruction. It also refers to people’s careful planning that may go wrong for some reasons.

That is so true in the world in which we live. Video games were initially a reward. It was back when I played PONG with my sister.

Now video games are babysitters, entertainment, and a break from parenting(who cares if a child sits for hours and stares at a screen without personal interaction).

However, with the help of a dead battery and the story of the 150-year Kudzu invasion of America, Boogs didn’t need video games to see the world differently. And maybe he learned a little bit along the way.