FROM THE EDITOR'S DESK: Clay City victory parade a fitting end to a wild, wonderful day 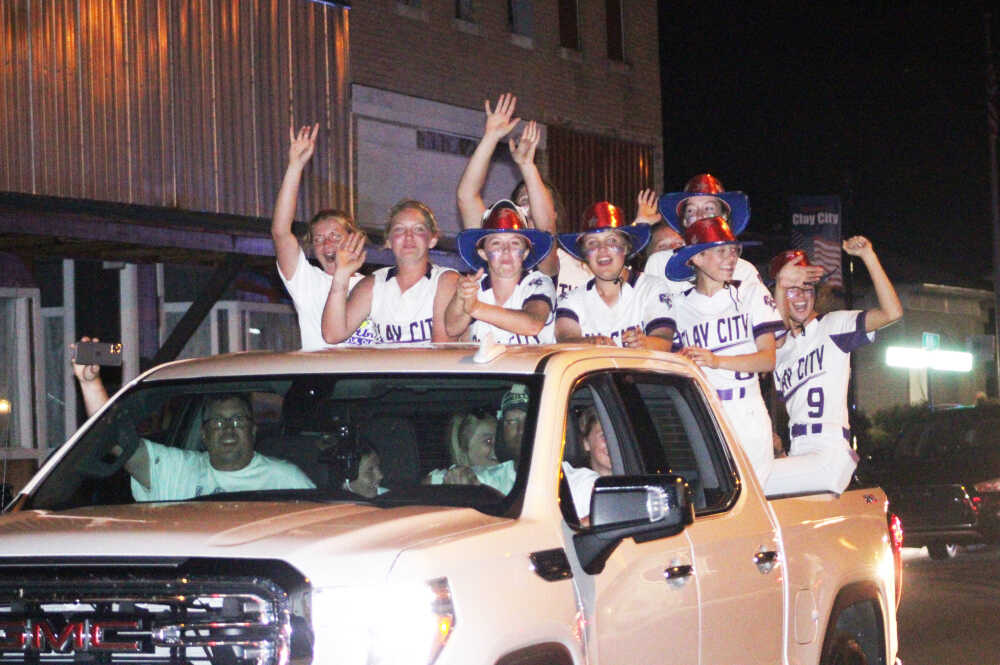 What a day Saturday was. Actually, what a great last few weeks Ive had — tipping my toes back in the sports waters

Clay City’s semistate championship on Saturday was hardly a shocking upset, but the Eels knew they would have to beat two good teams to make it to the state finals for the first time in school history in any team sport — and that’s exactly how it played out.

Of all the cool parts of the day, the parade through town afterward was one of my favorite ones.

I got caught up in the lengthy caravan on the way home, and admittedly at first was a little annoyed. I had left home more than 10 hours earlier, and to be honest I was ready to just go to bed.

But the caravan took a little detour on its way into town, and I was able to get to downtown Clay City before it arrived so I stopped.

What I saw there was electric and heart-warming, and made the late hour irrelevant.

People lined the streets on both sides, with cameras or cell phones in hand to record the procession.

Fire trucks loudly sounded their horns, and passenger vehicles tried to keep up but really had no chance in that competition. Many kids were there who were up way past their normal bedtimes, and nobody cared.

As I turned to look up the street and walked a few blocks, I was amaze at how many people had come out to congratulate the girls on their way to the school in the back of a pickup truck — many wearing the treasured red, white and blue cowboy hats which went along with the student section’s USA theme.

When I taught, my students were constantly impressed (or annoyed, depending on the group) by my ability to take any situation in a book or short story and compare it to something from popular culture that might help them relate to it.

For this situation, I chose the scene in “Remember the Titans” when Denzel Washington’s team had won the playoff game that let them go to the state finals.

The coach’s daughters had cleared off the kitchen table, but he said he wasn’t going to work.

“We’re going to celebrate,” he said.

With a small child sitting on his shoulders, Denzel/Herman Boone ran around in the street as people from nearby houses shouted their approval for the victory.

(No, there were no racial overtones in Clay City that night to magnify the symbolism — but it’s a solid reference point otherwise.)

I bypassed going to the school, since I was even more tired at that point. My trip home was a little quicker than usual, since I knew where ALL of the county’s sheriff’s deputies were.

It was a great night. Let’s do it again Friday.

Some of my friends ask me if I miss doing sports reporting and editing, and I honestly tell them “some of it, but not a lot of it.”

I did that job for several decades off and on, witnessing and reporting on many memorable games and stories as well as several that were, well, largely forgettable.

Just part of the job.

But as the softball sectional rolled around, I knew I would need to brush off my clipboard and print off a few scoresheets with the high caliber of Clay County’s two softball teams — which the sectional draw had them inconveniently playing at the exact same time both days.

Sports editor Adler Ingalsbe and I talked over who would do which game, and still coming off a hectic week of a graduation section and all the various commencements I opted to take Clay City. I really didn’t want to drive all the way to Edgewood two days in a row, and I’ve always enjoyed my visits to Clay City.

We made it through the sectional fine, and then in a span of about a day and a half our crack team at the Brazil Times (Jeanne Burris, Christina Meyer, Edie Burgess and Rana Hill) was able to sell a ton of ads for a special keepsake edition featuring both softball sectional champion teams.

Adler and I created some pretty good content with such a short window and had a good section highlighting our winners.

The following Tuesday, June 1, was regional day for both teams. Northview’s baseball team had already won its sectional and if both softball teams won we were going to try to do a mega-keepsake for all three teams.

I shook off the aftereffects of a colonoscopy earlier in the day, and was thrilled to see Clay City take the regional crown.

Both of our teams won, of course, and this special mega-section — which had to be done by 5 p.m. Thursday instead of Friday night — had many more ads and was twice as big.

I wanted to stay with Clay City softball at North Daviess, having taking a liking to their team and being able to have a better feel for them than covering one of the others I hadn’t seen as much. Adler went with Northview baseball to Danville, but we still needed to get Northview softball covered at Brown County.

I called my great and reliable friend Gary Hazlett from Putnam County, who had worked for me during my time there. Being a softball nut like I am, he was glad to and help out.

Adler and I discussed many scenarios on who would go where on Saturday night based upon the results of the afternoon games, and as it played out Adler stayed at Danville and I stayed at North Daviess.

Between games, I went to our sister newspaper’s office in Linton and wrote my afternoon game story while also putting Adler and Gary’s stories on our website. I had not previously met Linton’s new editor, but texted her and met her at the City Park to get her key.

Single-handedly covering a tournament of this magnitude is pretty difficult, especially in the hectic nature after the game with players scattering everywhere to give hugs and take photos with everyone there.

So, I called Gary and asked him if he wanted to come to North Daviess for a Saturday night. I wasn’t sure if he would or not, but after he thought about it and I told him what a good game I thought it would be he said he’d be there.

Fortunately, the game was one of the best I can ever remember seeing. I called Gary later to ask him if he made it home OK, and after going from Putnam County to Brown County, back to Putnam County, then to Daviess County and then back home he admitted it was worth all the driving.

(If the game had been 15-0, he might have had a different viewpoint.)

So all in all, the past few weeks have been worth it. Even if I missed out on some planned vacation days last week, rarely saw my wife and rarely did anything else except work and sleep.

We are committed to bringing our readers the best coverage possible, and we hope the past few weeks demonstrates that commitment.

The teamwork in our office, including Jeanne overseeing the whole operation and Ivy Jacobs taking on even more of the news side production, is the only way that all this was able to happen.

Comments
View 5 comments
Note: The nature of the Internet makes it impractical for our staff to review every comment. Please note that those who post comments on this website may do so using a screen name, which may or may not reflect a website user's actual name. Readers should be careful not to assign comments to real people who may have names similar to screen names. Refrain from obscenity in your comments, and to keep discussions civil, don't say anything in a way your grandmother would be ashamed to read.
Respond to this story