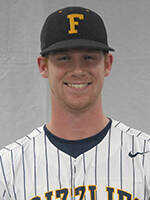 On May 14, Franklin College’s baseball team fell to Rose-Hulman in the HCAC Tournament’s Elimination Round game, ending the Grizzlies’ season.

It also appeared to be the end of former Northview standout Alex Reinoehl’s, who set the Franklin College saves record this spring, baseball career.

Reinoehl came back home to Brazil after the season-ending loss and attended his younger brother, Peyton’s, high school graduation on Friday night and then was at his open house on Saturday when Brady Shoemaker’s name popped up on the side-armed pitcher’s phone.

So, Reinoehl, who was well passed due for an oil change in his car, grabbed the keys to his dad, Brook’s, car and hit the road with his cleats and gloves seated next to him.

Once he arrived, Reinoehl showed Bennett and the Dockhound coaching staff what he could do. It turned into a contract offer and an immediate roster spot in Saturday’s game.

“Brady Shoemaker got in contact with the Dockhounds’ manager, who he knows, about me and told me to give the manager a call,” said Reinoehl. “I’m super thankful to Brady for being a massive part in opening this door for me.”

As it turned out, Bennett called down to the bullpen and told Reinoehl to begin warming up just a few hours after the organization had signed him to a remainder-of-the-season deal.

After he got his right arm loosened up, Reinoehl trotted out to the mound and did what he’s done throughout his collegiate career, spinning four innings in relief to preserve the rest of the pitching staff while also showcasing the talent that opened a professional opportunity for him.

“Pitching was so much fun. I was a little nervous, but honestly felt pretty comfortable and ready to just give it all I had and see what happened. I really wasn’t thinking about how good or bad I was doing or how good everyone around me was. I just was concerned about executing the pitches I was throwing, which is honestly what it was like getting all those saves this spring Franklin,” Reinoehl described.

Reinoehl didn’t know he would be signed immediately after his 20-pitch tryout, so the former Knight didn’t pack any clothes or toiletry items for his trip to Geneva and was living in his Lake Country Dockhound apparel until he could get back home after the team concluded its road trip and had an off day before starting the next series.

Reinoehl said the whole thing has been a complete whirlwind, but he’s excited to be back playing baseball, especially at the professional level.

“It wasn’t a traditional way of getting signed by any means, but I’m so thankful to Jim Bennett and the organization for taking a chance and letting me play for them,” said Reinoehl. “After setting the [Franklin saves record] and having my first pro outing, it honestly just made me smile that my work has served me well. All I have been trying to do is play ball a little longer. Not even asking for much success, just to play. So, the record and pro ball was a cherry on top.”