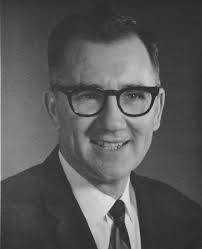 Universally esteemed as a coach, Clay County native Angus Jeffers “Nick” Nicoson is an Indiana basketball legend.
One of seven children of Henry Jefferson and Nellie (Campbell) Nicoson, Angus was born Sept. 30, 1919, at the family farm west of State Highway 59 near Center Point. By the time he enrolled in school, his brother, Cecil, was a coach at Ashboro High School and brother, Ralph, was a high school athlete. During Nicoson’s final two high school seasons, Ashboro flourished in athletics, reaching Wabash Valley Basketball Tournament Finals in Terre Haute. When he was a junior in 1936, the Shamrocks defeated Dana and Spencer before losing to Oblong, the eventual tourney champion. Nick was the leading scorer in all three games. In the 1937 Wabash Valley Tournament Finals, Ashboro eliminated Oaktown and Terre Haute Garfield before losing to Terre Haute Wiley. Nicoson was named to the all-tournament team both years.
After spending a year at the Training School of Trades in Washington, Indiana, Angus matriculated to Indiana Central College (now the University of Indianapolis), where he played basketball and baseball. Twice selected to the Hoosier College Conference basketball team, he was the top player on the 1941 and 1942 Greyhound teams that won thirty straight games. Nick captained the unbeaten (16-0) 1941-42 team, which was ranked ninth in the nation. He also was baseball captain, rejecting an offer from the Chicago Cubs due to World War II. Nicoson taught and coached at Franklin Township (now Franklin Central), compiling a 92-28 basketball coaching record between 1942 and 1947. On weekends he played pro-basketball with the Indianapolis Kautskys.
Hired as coach and athletic director by his college alma mater in 1947, Angus launched a brilliant 30-year career. At various times, he tutored baseball, football, tennis, cross country, and track teams, but he carved his largest niche in basketball.
At his retirement, Nicoson’s 483-274 career coaching mark was the seventh winningest in collegiate history. Chosen for 19 years to coach the Indiana All-Stars, Nick steered his team to 19 victories over Kentucky’s prep stars in 31 games. He was Hoosier College Conference Coach of the Year eight times, leading the Greyhounds to the NAIA national tourney six times. In 1966-67 he was president of the National Association of Intercollegiate Athletics and 1967 NAIA Coach of the Year. Inducted into the Helms Foundation Hall of Fame and the Indiana Basketball Hall of Fame in 1970, he received the 1971 Silver Medal from the Indiana shrine. At the NCAA Finals in 1977, he was honored by the National Association of Basketball Coaches. A board member of Olympic and Pan American Federation committees for five years, Nicoson was named assistant coach of the 1969 U.S. national team that toured Europe and the Soviet Union.
Off the court, the man known as “Nick” to many of his colleagues, served on numerous civic organizations and was aboard member of several sports-oriented clubs for young people.
“He was a very good coach, a good man personally, and a credit to the coaching profession,” said Paul D. (Tony) Hinkle, a former Butler University basketball coach and longtime friend and hardwood foe.
Oscar Robertson, a former superstar of the National Basketball Association and who once played for Mr. Nicoson as an Indiana High School All-Star, called the coach a “tremendous person.”
Mr. Nicoson also coached Oscar’s brother, Bailey Robertson, one of the few blacks on the predominately white Indiana Central campus at the time.
“He’s truly a credit to humanity,” Baily Robertson once said. “He was like a father to me.”
Mr. Nicoson also directed budding Hoosier basketball stars such as Terry Dischinger, George McGinnis, Jimmy Rayl, Ron Bonham, Dick and Tom VanArdsdale, Louis Dampier, Billy Keller, Junior Bridgeman, Pete Trgovich, and Monte Towe during his All-Star coaching career.
Failing health forced Nicoson’s retirement on Feb. 26, 1977, and he died May 23, 1982, at age 62. He and his wife, Bea, had two sons, Terry and Dan. Dan’s son, Brett, was named golf coach at the University of Indianapolis, where the basketball arena—considered one of the finest basketball venues in NCAA Division II—was appropriately named Nicoson Hall in 1977.