An apology for a life filled with lemons 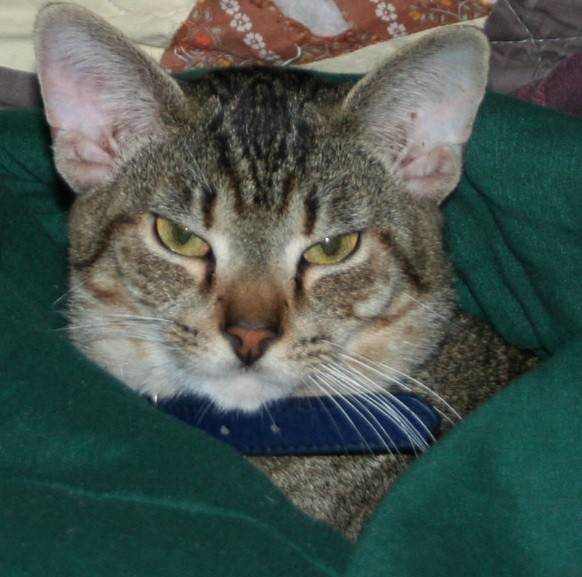 To avid readers of this blog, I apologize for not posting anything new for the past few weeks. But life has been handing me a lot of lemons lately, some of which have become sweet treats and others that have been hard to swallow.

With so many members of my family fighting colds and flu-like symptoms that want to hang on forever and a day, struggling to get the house in order while planning menus and shopping lists for the holidays and living the chaotic normality of this life, there has been a lot going on. The great thing is we are a family working our way through it all, and that is a wonderful treat anytime of the year.

However, my family was hit with a tragic loss early Halloween morning.

Around 2-3 a.m., as my kids were bringing stuff inside after working the haunted house Friday evening at the "A Night At The Manor," Iggy, our Tabby cat who loves to eat peas, slipped out the front door into the darkness.

Although born in a barn a year ago, Iggy has lived indoors. Loud noises and foreign objects scare him terribly, and when scared, he doesn't stop running until he feels safe or exhausted. It's hard telling where Iggy finally stopped running.

No one realized Iggy disappeared into the wild streets of Brazil until around noon Saturday. My husband and I left early in the morning to go grocery shopping and discovered he was missing when we returned.

My son and father were home sick, but many of our friends went looking for our cat.

I tried hard to keep a smile on my face and hope in my heart.

As creepy as it might sound, my husband went driving around Brazil to see if we could find his remains on the street so we could at least know if he was dead. I could have some peace of mind knowing what happened to him.

We took our dog LiLi, who is best friends and sleeps curled up with Iggy in the living room, for a walk in a grid pattern for more than 24 blocks around our neighborhood. The thought was, if Iggy was lost and scared, the familiar scent might help him find his way home.

As silly as it sounds, I posted Iggy's description on Facebook and contacted the Brazil City Police, Clay County Humane Society and the Clay County Animal Rescue. I wanted to try and find my friend and bring him home.

But, after another failed search on this weekend, I went to my bedroom, shut the door and couldn't stop crying. My husband was also silently crying as he hugged me.

I'm not what you would call "a dramatic person," but a lot has happened the past few years that I probably should have cried about and couldn't bring myself to do it.

When we moved into the city in 2007, I made sure my two children could have pets. Thanks to our generous and understanding landlord, a large, very loveable male Tabby cat named Tinker, moved with us. Although she had a slight attitude problem at first, a jet-black cat named Onyx joined him. They helped our family recover during dark times.

But living in the city is hard for inside pets that get loose and desperate pet owners who have to look for them. The search for Tinker lasted a year, and to be completely honest, I still stop the car when I see a cat that looks like him so I can call out his name. We discovered Onyx found a new home on the south side of Brazil about six months after she disappeared.

Soon after, Mooch joined our household, but was also claimed by the city streets in the summer of 2008.

LB joined us the spring before Mooch disappeared and is still at home with my father.

After losing all our other beloved pets, I didn't want to get attached to another cat and then lose it.

My daughter brought the "runt" of a litter of kittens home around Christmas 2008. I couldn't say no to her, but I didn't want anything to do with "St. Ignatius."

However, Iggy had different plans, and soon that little puffball of fur and I were best friends. He reminded me of my pal Tinker. Both cats would climb up in my lap and hug me when I got home from work.

Iggy would sit on a bench in the kitchen and watch me cook dinner or clean house. Once he attempted to climb in the shower with me, but didn't like the water hitting him in the face.

We grew so close that no language was required for him to know what he could and could not do. Learning how to open my bedroom door, he'd push it open and stare at me, waiting for permission to come inside. A nod meant he would run to climb in my lap, but if I shook my head he'd turn around and leave for a few minutes before trying again.

Needless to say, I didn't say no to those great big eyes that often. Iggy helped me pick my outfits for work and consoled me after a hard day.

I know many people don't like cats because they are independent in nature. Dogs need attention on a daily basis; they thrive on it. A cat doesn't really need a person for much, but when they decide to make a relationship/friendship with someone it becomes all the more special.

I miss Iggy. It's hard to keep looking and not finding him. But each night when I get home, I stand outside and call his name.

"We'll get you another cat mom," my kids say in condolence when hugging me after saying they haven't found him, yet again. "It will be OK."

I know there will be more pets in the future for our family. But right now, I'm not sure about getting another pet. It's hard to eat peas, or do anything we did together, without my Iggy to share them with.

More from this blogger · Ivy Jacobs
Comments
View 3 comments
Note: The nature of the Internet makes it impractical for our staff to review every comment. Please note that those who post comments on this website may do so using a screen name, which may or may not reflect a website user's actual name. Readers should be careful not to assign comments to real people who may have names similar to screen names. Refrain from obscenity in your comments, and to keep discussions civil, don't say anything in a way your grandmother would be ashamed to read.
Respond to this blog