We can always use more soap 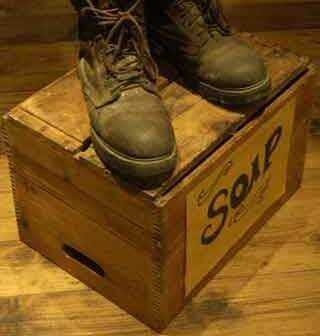 (My apologies for using my column in this BLOG, but I found a relevant recipe for my rant. Also, I'd like to hear people's opinion regarding my column. So climb up on your own soapbox if you want to!)

As part of my job, I spend a lot of time seeking answers, and the truth.

Joyce Carol Oates, an award winning American author who has been nominated for the Pulitzer Prize for three of her novels since 1992, once said, "In writing of crime, one is writing of American life in extremis (in its farthest reaches)."

A prolific author of the ordinary lives of people, in 1986, Charles Bukowski was dubbed a "laureate of American lowlife" by Time Magazine.

He is recorded as saying, "American society and what it extracts from the body and the mind and the soul can grow very special monsters..."

Of course the public record portion of any newspaper -- large or small -- shows people arrested for petty misdemeanor crimes all the way to class A felony charges, crime is everywhere. Often, after writing one of the stories for my job (the crime/emergency response/legal beat), I wonder what has the world come to and/or can it get any worse.

Although not every arrest leads to a story, so many of the special monsters' crimes fall into the "to-do category" of being at least a D felony or above.

Maybe Mark Bowden, the award-winning author of "Black Hawk Down: A Story of Modern War," had the right idea for writers of crime stories when he said:

"Most crime stories are ultimately about the doer. We are fascinated by the exact details of their crimes, but what we hope those details finally add up to is an understanding of why they did what they did. Crime writers have always known that their best subjects were completely sane. Their stories show how and why perfectly sane people do supposedly insane things."

Has the world gone insane?

I don't think I'm medically trained to make that diagnosis. I'm not sure anyone is.

Albert Einstein once referenced an old Chinese proverb to define insanity as "doing the same thing over and over again and expecting different results."

Law enforcement officers seem to always arrest the same special monsters. Our judicial system is backlogged with cases involving the same repeat offenders, who often are moving up the criminal ladder of felony charges.

Is it too much for society to expect someone to reform when caught doing something wrong, and especially something illegal? I don't know.

The world is a much different place than it was when I was growing up. There were rules to follow at home, in the neighborhood and when out with friends. You weren't allowed to "act up" in public, at school or home.

You followed the golden rule and treated all people, not just members of the "in-group," with consideration, respect and kindness.

Responsibilities, like household and yard chores, were expected to be completed without question. If the dishes weren't done or your room wasn't cleaned, you knew better than to run off and do what you wanted.

If these expectations were violated, you learned pretty quickly not to do it again!

I know, a fervent debate continues over what 17th century poet Samuel Butler meant when he twisted the wording of Psalms 13:24 in a published poem to read, "Then spare the rod and spoil the child." I, along with many other young people of my day, were familiar the pain and the punishment of those words if we didn't know right from wrong.

In the 1995 film "12 Monkeys," character Jeffrey Goines said, "There's no right, there's no wrong, and there's only popular opinion."

Although a fictional character, maybe he's right about the real world.

Spring has arrived in our little corner of the world.

While many families pack a few bags and head off for the adventures of an early vacation, others can't afford to go anywhere for luxury.

While my husband and I have been at work, my father and my son are doing a bit of spring-cleaning around the house. It's not as fun as a trip away, but we've enjoyed the luxury of family and friends in our "getting cleaner by the minute" home several times this week.

However, I don't think others faired so well.

During my daily journeys around Brazil; I've witnessed several extremes of life.

On the unbelievable side were:

* Three separate and rather loud, nasty altercations between adults standing nose-to-nose -- two in their front yards, and one in a local grocery store parking lot,

* Two thoughtless and disrespectful young men walking along a city street, throwing trash into the road and cursing at motorists driving by them,

* A toddler on a tricycle beating a cat with a stick while adults watched and laughed from a front porch,

* An adult driver almost causing an accident in a restaurant parking lot while attempting to get away from a young man cursing and spitting a drink on their car, and then endangering pedestrians and other drivers while playing a game of "stop and go" with that same young man, and

* One apparently intoxicated person taking a "whiz" on the sidewalk without a care in the world that they were in public view.

In the 1941 film "Meet John Doe," the character of The Colonel said, "I don't read no papers, and I don't listen to radios either. I know the world's been shaved by a drunken barber, and I don't have to read it."

In my opinion, nothing else quite sums it up better.

On the flipside, and I thank God there is a hopeful flipside, I saw:

* A young man hold an umbrella for an elderly woman as she loaded groceries into her car,

* A father helping to teach his child how to ride a bike as the mother offered encouragement a few steps away,

* An elderly couple walking and holding the hands of their grandchild while strolling in a local park,

* A group of teenagers picking up trash as they walked through town, and

* A local merchant tell a person who was a little short of their grocery total to not put back the cereal, "Just pay for it the next time you are in."

Maybe the world isn't completely going to Hades in a hand basket. My grandparents believed that as long as there were good people in the world, there was always the opportunity for hope.

Ultimately, I think Confucius understood the world and humanity best when he said:

There's always a ray of hope in this world.

What's this got to do with cooking? Nothing.

My father says that everyone once-in-a-while a person should climb up on a soapbox and howl at the moon to let off a little steam. I guess that's what I just did.

So, in the spirit of my Blog, there is something I can share: How to recycle a new bar of soap out of scraps and relieve pent up frustration.

A knife and a liquid measuring cup.

Chop the various soap pieces as small as possible before tightly packing the soap inside the cup.

Place cup inside the microwave and cover loosely with a paper towel to catch any soap that might pop out during the melting process.

Microwave for 15-20 seconds, watching closely to make sure the soap doesn't boil over. WARNING: If it does, immediately shut off microwave.

Check the cup, if the contents do not appear melted, you can repeat this process up to two more times.

Remove cup from microwave and let soap briefly cool to the touch. Then place two paper towels in the bottom of the plastic bag before setting sup inside. Use the sides of the plastic bag to protect your fingers while you cover the top of the cup. Push down firmly on the soap inside the cup to make it stick together and force some (but not all) excess water from the cup.

Remove cup from bag and place in secluded area for about a week to completely dry. Peel off the paper cup before using the soap.

NOTE: A food processor can be used to cut up the soap pieces. However, there is a level of frustration relief that comes with manually chopping the soap. There is also the added benefits of participating in recycling and extending those budget dollars.

More from this blogger · Ivy Jacobs
Comments
View 4 comments
Note: The nature of the Internet makes it impractical for our staff to review every comment. Please note that those who post comments on this website may do so using a screen name, which may or may not reflect a website user's actual name. Readers should be careful not to assign comments to real people who may have names similar to screen names. Refrain from obscenity in your comments, and to keep discussions civil, don't say anything in a way your grandmother would be ashamed to read.
Respond to this blog