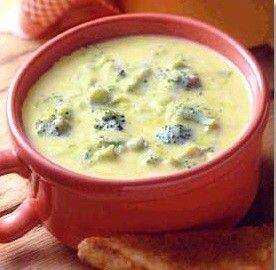 Slow down the chaos of life with a warm bowl of soup. Even in the summertime, it's delicious!

I can't help but giggle at the updated version of the iconic character. It seems to mirror my own life a little too closely.

All too often, I find myself saying the same thing.

My son -- who quite possibly has a future as a comedian if he survives his teenage years intact -- likes to remind me in his charming way on a routine basis that I'm getting old. However, if age is a problem with my mental capacity, then (I tease him right back) I believe dealing with a certain sarcastic and wiseacre of a 16-year-old son these past few years might be part of the reason why I'm goofy.

My husband, family members and several friends believe I take on too many projects in life.

For example: I finished the manuscript for one book, which I know is a tremendous accomplishment, but the ending requires I complete at least two more books to properly the story. And, while mapping out the second manuscript, I opened myself to at least two other potential manuscripts.

With the prospect of five manuscripts on the horizon -- that all have to be written while I hold down my job here at The Brazil Times, maintain my marriage and family life, enjoy my friendships and try to have some type of social life -- my husband, the kind, compassionate and understanding soul that he is, just shakes his head at me.

"Do you plan on sitting down or sleeping anytime soon?" He asks while hugging me. Jason knows full well that if I sit down to write (or get up to go clean something, or do laundry, or cook or do anything else for that matter), he might not see the whites of my eyes for several hours.

With a call chain in place, folding chairs stashed in the trunks of their vehicles and snack money hoarded away, my family and friends are secretly waiting for the day when my schedules collide with each other.

I don't blame them; it will be one heck of a show watching me juggle everything at the same time. Maybe I will join them if that happens, but until then I will just keep chugging along doing what I like to do, which apparently is everything all at once!

Surrounded with a chaotic life, I'm back to using the Crock Pot for my cooking.

I have two cookbooks featuring recipes for Crock Pots, which includes the following basic recipe for Cauliflower-Broccoli Soup:

Mix all of the ingredients together and heat on low in a small spray-coated Crock Pot for approximately 2-3 hours, until vegetables are tender.

It's OK, but I like to tinker while cooking, even in a Crock Pot.

Preferring the taste of fresh ingredients, I replace the frozen vegetables with half of a head each of cauliflower and broccoli. Cut in natural looking pieces including a portion of the stalks, not chopped up beyond recognition.

Slice or chop (which ever style you prefer) one large red onion, three stalks of celery (including the leaves), two garlic cloves and one small red bell pepper. Sauté the vegetables for five minutes in a skillet with two tablespoons of butter and one tablespoon of olive oil before adding to the Crock Pot.

You can also add two cups of sliced mushrooms and any type of precooked leftover meat in the refrigerator if you want to get rid of those pesky leftovers.

Mix together the Cheez Whiz, cream of celery soup, one cup of Half and Half and one cup of strong ale beer along with a dash of Tabasco sauce and one tablespoon of course ground black pepper. You can add a bit more beer if you like the soup to be thinner.

Heat in the Crock Pot on low until bubbly, approximately 3-4 hours.