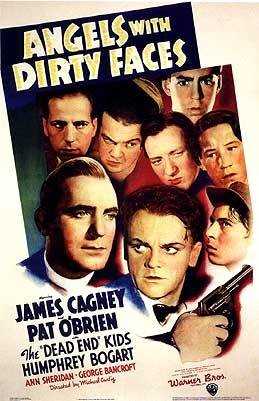 My Grandma Iva always quoted the idiom, "Out of the mouths of babes, oft times come gems of wisdom."

She also loved the 1938 classic movie starring James Cagney, Pat O'Brien, Humphrey Bogart and Ann Sheridan (along with several young men who were destined to forever be known as The Bowery Boys) entitled "Angels With Dirty Faces."

It's about a pair of unlikely childhood friends. When the duo grows up, one becomes a priest who manages a home to keep boys from entering the dangerous world of crime, while the other becomes a gangster.

The priest tries to stop the gangster from corrupting a group of street kids who idolizes the high life of criminals around them.

The most famous scene in the movie comes at the end, when the priest tries to convince the gangster to fake cowardice on his way to the electric chair as a way to make the boys ashamed of him.

Although somewhat hokey in this time of glorification of violence in all forms of entertainment, the movie has made its presence known to new generations with scene clips appearing in "Home Alone" and "Home Alone 2: Lost In New York."

Recently, I wandered out the front door of my house to discover approximately 12-16 teenagers gathered in my front yard, just sitting in the swings and lawn chairs while listening to music.

The group is a hodgepodge of what is generally referred to as the "cliques," including some hicks, military brats, sporties, Emos, Goths and norms.

This close-knit bunch knows each other very well. These teenagers call each other "brother" and "sister" without reservation and greet each other with open arms. They share a unique friendship despite various troubles in their past.

They are family by choice. For a few members of the teenagers, it is the only loving family they have.

While most people get angry at seeing such a large group apparently gathered "for no good reason," I had the privilege of listening in on an unexpected theological conversation.

So many youth today, even those whose parents load their children in the car each Sunday to attend church, claim to either not have any faith or believe in God, which is very disheartening to hear in this chaotic world. I truly believe we need both in our lives.

"My parents don't know it, but I'm an Atheist," one teenager announced to the group. "If there is an omnipotent being in the universe that sees all and knows all, they would have surely destroyed mankind a long time ago for all the crap we've done."

I want you the reader to be able to put this moment into context properly, so let me describe this child for you briefly. This wasn't a "bad kid" clothed from head to toe in black. This child was wearing blue jeans, a polo shirt and boots. You know, the so-called "normal" kid.

Many of the teenagers in the group agreed with the statement, citing inferior family ties and a loss of their hope for the future as reasons for not having faith in the world around them.

I wanted to intervene and tell them there is always hope in the world and that faith and God are real and vital to life. Being an adult, I realize that sometimes our desperate attempts to teach morals and scruples fall on deaf ears. Yet, a better teacher stepped up.

When asked what one unusually quiet teenager thought, I witnessed an act of bravery by what many people would consider an angel with a dirty face.

"I believe there is a higher power than us in this universe. Is it named Jesus, Jehovah, Budda or called by something else? I don't know. But I believe in something better in the world. The problem isn't with God, it's with people who don't love like God," the teen, whose seen their share of trouble in the recent past, held their head high as they spoke. "I have faith there is something more to believe in. I just haven't found my home with God yet."

Often when this group is gathered at my house, the kitchen cupboards are cleaned out by the hungry hoard. While it can be a little frustrating, I don't mind seeing them enjoying a good meal together.

The sound of "thanks mom" spoken from full mouths isn't the best of manners (which I correct each of them when they do that), but it does my heart good.

That day, I made a little something special for dessert.

On one of those days when you need something special to say "thanks," I hope you try this one:

This recipe works best when you have a partner in the kitchen. One person can man the stove while the other prepares the workstation.

In a large saucepan, combine butter and sugar over medium heat, stirring constantly while sugar dissolves.

Bring to a slow boil and cook until syrup reaches "soft ball stage" (234-240 degrees) before removing from heat. (PLEASE use your candy thermometer for this recipe, oven mitts or potholders and be very careful with the syrup, it can cause severe burns if it spills on your skin.)

At the workstation, cover the counter top with some wax paper and then place the nuts and the coconut in a large bowl with a lid so you can toss those cake squares!

Using tongs, quickly dip the cake cubes in the syrup and then roll in the pecan/coconut mixture. (You can sprinkle a little bit of cinnamon on top of the cakes at this point.) Place on wax paper to cool before storing in an airtight container.

Now comes the part, where we can put a little ZING in the recipe!

Once the little cakes have cooled, melt some chocolate (white or regular), butterscotch or any flavor of baking chips you like, and then dip them one more time. Let them cool before serving.

Have fun with double dipping the cakes or drizzling various flavors on the cakes as decorations.

Don't be afraid to change the nuts or try other types of coating, like graham cracker crumbs or crushed cookies.