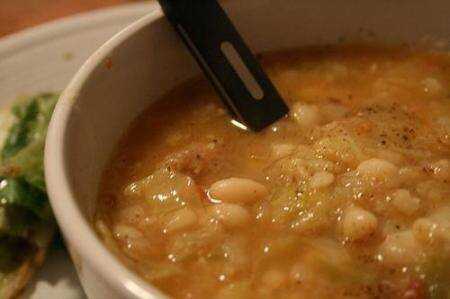 A bowl of white bean soup can warm your up and soothe your soul.

Ever have one of those times when food just doesn't sound good because it feels like you're eating the same thing day after the same old boring, yet hectic day?

With our busy schedules, my husband and I begin planning dinners for the weekdays during the previous weekend.

It's not an easy task.

With our limited budget constraints, various appetites to feed in our household at unique intervals due to everyone having a different "life schedule" and then actually finding the time to cook the meal, we usually just look at each other and shake our heads. But we try to make a menu each time we get paid (for browsing the advertisements and ultimately going grocery shopping) and then try even harder to make sure our family gets fed.

The kitchen gets kind of busy when everyone pitches in, but it's a fun atmosphere. It's an opportunity to get to know what is happening in each other's life when vying for one of the burners on the stove or fighting back tears while chopping onions.

The most frustrating part really is planning what to fix for dinner.

There are a lot of meal options that are quick, economical and crowd-pleasing. But how many times can you make macaroni and cheese before you can't look at it anymore? My personal number is three in a week, but my kids could eat it every night. I cringe at the thought.

The Sunday before last, we had the weekly menu all planned out. However, a few SNAFUs threw a monkey wrench into the works and everything changed by the middle of last week.

In the midst of chaos, my husband and I started the dreaded conversation:

"What you want for dinner?"

"I don't know. What do you want for dinner?"

"I don't care what you fix, but I'm not going to be home to help cook."

"Well, I'm not going to be home that early either."

The conversation continued for about five minutes while we struggled with our limited options. A family member volunteered to buy pizza, which placated the hungry masses in the moment. But it also created a problem.

Instead of having the same dreary conversation, my husband asked my son, "What do you want for dinner?"

Without much hesitation, he replied, "What about bean soup?"

It wasn't part of our well-intentioned dinner plans. The forgotten dusty bag of dried white beans has been hiding in the back of pantry for a while. We sort of knew they were there, but the ingredient was always an after thought in our household. Our family enjoys a nice bowl of bean soup, so we always meant to cook them, but never did.

"Why not?" My husband asked me, and although I said yes, in the back of my mind I thought, "Because it takes too long to make beans from scratch."

It's not that I don't know how to do it, I just didn't want to take the time to do it. But I didn't say anything, making bean soup was different from what our routine had become.

So, I went home to the dreaded task of preparing the beans.

It wasn't really all that time consuming. (Make sure you read the instructions on the bean package if you're not sure what to do.) Within 10 minutes, I had rinsed the beans clean, picked out the debris and left them to soak overnight in a Dutch oven (with the lid on top) on the kitchen stove.

I felt a little bit ashamed about grumbling in my mind about something so simple.

The next morning, I drained the beans (which had doubled in size) again, filled the pan with water one-inch above the beans (like my Grandma Iva taught me so long ago to do), added a tablespoon of salt to the water and brought the contents of my Dutch oven to a boil before turning down the heat to its lowest setting. The beans could cook the rest of the day on the stovetop while we were at work.

While getting ready for work, I was mentally kicking myself (or maybe it was the memory of my grandma) for making such a big deal out of a little bit of so-called extra work.

I left my father and my son-in-law in charge of stirring the pot and left for work.

The day turned out not be so good for me. I started to not feel well a few hours later (there's some nasty bug going around) and went home from work early.

The house smelled really good as I came in the front door.

"That smells awesome," my son-in-law said before leaving the house. "Save me some, OK?"

While I chopped up an onion, four cloves of garlic and several stalks of celery to add to the pot, my father came inside to take a big whiff.

"Smells good," he said while stirring the pot. "This officially makes it fall."

Won't lie, I did cheat a little bit. I used a package of precooked chopped ham and dumped in a can of stewed tomatoes, but no one cared.

When I finished seasoning dinner with some salt/pepper and announced "Soup's on," I almost got trampled.

Even several of the usual visitng teenagers (some of them are very picky eaters at home) grabbed a bowl and got in line for dinner. Our front yard was filled with people eating beans, even a couple of the neighbors grabbed a bowl.

Although I didn't feel up to visiting too long with company, the dreaded bean soup dinner turned into an impromtu gathering. There was laughter and story telling, not to mention a good, economical, hearty meal to enjoy together. (Although there was a small tiff about who ate the last cracker and a large YUK was groaned out loud by the kids when they realized my dad puts instant coffee granules on top of his beans,)

Life had been so hectic lately, I had come to rely upon pre-made food to feed my family. And while they weren't necessarily starving, maybe they were in a socially and emotional way. Everyone, not just the hurried cook (who was regretfully not feeling well, but had a lift in spirits during dinner), had an opportunity to reconnect.

In my own rush to live a hectic life, I needed to be reminded why slowing down and taking the time to cook for family and friends is so important.

After missing my regular "blog time" last week due to illness, hopefully I can get back on track this week!