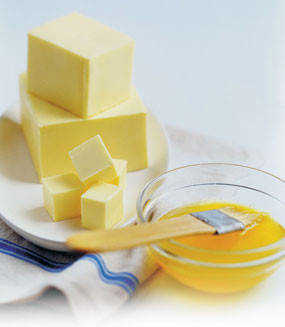 I admit to a guilty pleasure and sinful long-time love affair. My husband doesn't mind, he's enjoyed one too. We are both mad about butter.

In moderation of course, drizzling popcorn, smothering it on corn-on-the-cob, watching slices of it melting on top of mashed potatoes or mixing a couple of pats into homemade gravy is like creating art with your food.

In my opinion, there's nothing quite like the taste of decadent butter.

However, did you know there are many other uses for butter?

When my Grandma Iva taught me to cook pasta, she made sure to point out to season the water during my first lesson in the kitchen. I paid attention and did everything right, but when I took my eye off the pot, it boiled over like Mount Vesuvius.

I thought I messed up.

"It's all right," she said while patiently helping me clean up the mess. "A little bit of butter will fix that next time."

My Aunt Glenna's secret was to also butter the rim of her cooking pot.

"That way, if it starts to boil to high it will stop it."

Thirty years later, I still put a tablespoon of butter in the water and rim the pot when I cook spaghetti and it doesn't boil over.

The fishermen in the family also had a unique use for butter.

After a bountiful trip, they would gather out in the garage and clean the fresh fish.

"Oh dear lord Willis," my grandmother would complain when he came inside. "You reek like a fish monger."

(The same thing would happen to one of my uncles when he cleaned deer during deer season.)

Although a shower and a fresh change of clothes would remedy that, Papo's hands would still smell like fish until he washed them in butter.

What did he do? Rub some butter and a teaspoon of lemon juice on his hands for about two minutes before washing with warm water and soap. Then his hands would smell clean and fresh again.

In a pinch, butter also found its way on squeaky door hinges in our household.

One time, a cousin's baby doll mysteriously grew an ink moustache while visiting our house. Her tears were chased away when a tissue and some butter rubbed the nasty black scribble off her favorite doll's face.

My mother would use butter as a way to keep half an onion fresher longer in the refrigerator by rubbing it on the cut surface before wrapping it in aluminum foil and storing it.

Butter also helped calm down one of our cats who experienced some terrible anxiety.

Poor Pothead, a fluffy grey and white ball of fur who liked to blow out the pilot lights and sniff gas from the kitchen stove, was stressed out by our busy house his first Christmas. He would nervously jump and run into walls when the front door opened, was scared of the Christmas tree and hid in the closet. The hiding part wasn't so bad, but he screeched and mewed all the time.

A family member (after they stopped laughing at the sight of Pothead attacking the tree and running away), took pity on the poor angst ridden kitten and put some butter on the top of one his paws. As Pothead cleaned himself, he was distracted from the holiday commotion for a few minutes. It took a couple of applications, but soon we could pick him up and pet the kitten, which allowed Pothead to calm down and be comfortable in the house again.

By the next Christmas, my sister photographed him wearing a Santa hat.

Another wonderful idea for butter is using it to make hostess gifts during the holiday season.

When invited to dinner, ask the hostess about the menu. If steak will be served, garlic-pepper butter makes a good steak simply superb, while lemon-dill butter adds delightful flavor to fish and vegetables, and honey-cinnamon butter is awesome on dinner rolls and candied yams.

The following recipes are easy to make and can be made well in advance for those busy schedules.

Whip 1-cup softened, (unsalted) butter in a bowl(s) until smooth and fluffy for each of the sets of ingredients listed below.

˝ teaspoon each of ground white pepper and black pepper

Combine each set of recipe ingredients with the individual bowls of whipped butter gradually until mixed.

Store in the refrigerator for 5 minutes to let stiffen before using wax paper to shape/mold the butter mixture into 6-inch logs. (I've always wanted to use molds to make shapes for the butter, but I never find the time. If you do it, send a picture and let me see how it turns out. You might inspire me to take the time.)

Twist the ends of the wax paper to close, seal with tape and then keep stored in the refrigerator for up to one week before serving.

"Butter up" your hostess by presenting the homemade butters along with a nice butter knife and/or butter dish for her holiday table setting.