The story of Lilli & Teeny 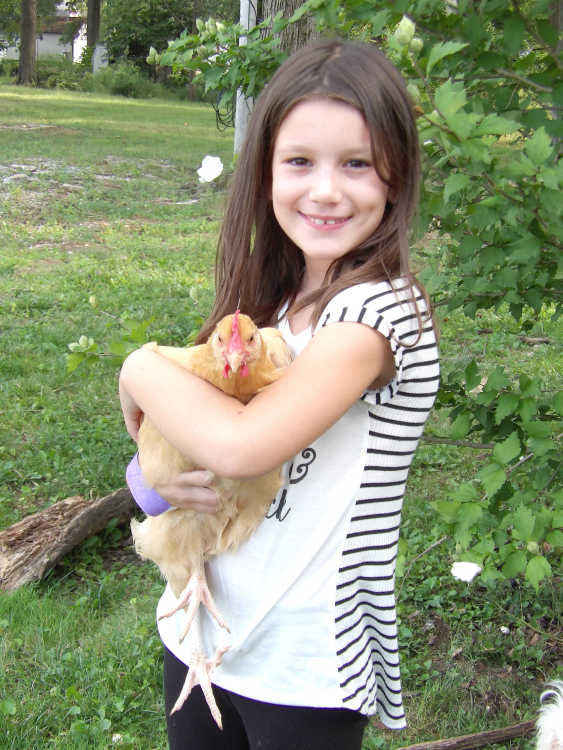 Brazil resident Lilli McCullough, 7, and “Teeny” have been buddies since the chick pecked her way out of the egg last spring. Ivy Jacobs photo 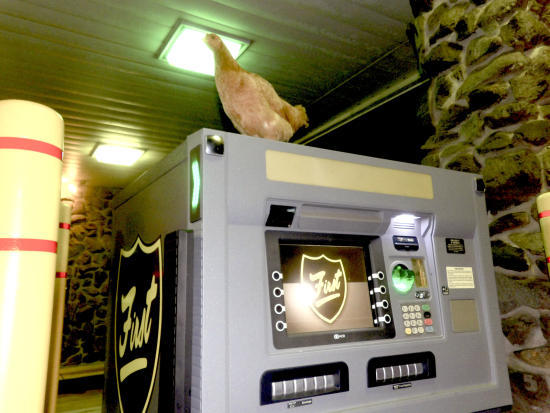 The story of Lilli & Teeny

On Thursday, Sept. 8, I experienced some strange things while using the ATM machine at the First Financial Bank branch on south State Road 59.

At first I thought I saw a cat curled-up, laying on top of the ATM to stay warm, so I pulled over as far to the right to not scare it awake. But when I got out of my car, that blondish-brown colored ball stood up, ruffled its feathers and squawked at me with beady little eyes.

Don’t know why, but I showed her my ATM card. Guess I was trying to prove my intentions; that chicken put me on the spot. Here it was going on 10 p.m. and I’m trying to sweet-talk a chicken into letting me use the ATM. I mean really, a chicken at the ATM? Seriously?

But this is Brazil, Indiana, and when it gets dark — sometimes it gets a little weird around here.

As I performed my banking transactions, she kept a close eye on me, hanging her head down over the top of the machine to watch me. Finished, I snapped her picture with my phone as I got in my car. It wasn’t very good, so I grabbed my work camera to immortalize the moment. Actually, I needed proof for when I told the story later.

Later, I posted the picture with the following comment on my Facebook page: “Not sure what to think about my bank’s new security guard program, but hey, they’re at least trying to fight back — even if it’s a chicken guarding ATMs. You see the strangest things after dark when you’re in Brazil. LOL”

Next morning there were a few comments about the picture, but the big response wasn’t on the Internet. Apparently local residents wanted to ask me in person about the chicken. Almost 50 people quizzed me for details about that picture, and the chicken.

After a couple of days I stopped in at the bank to ask about the fowl incident.

Apparently two chickens had been seen scratching around in the yard at the building and hanging out in the parking lot for a while. They just showed up one day. No one knew where they had come from, however, the employees had taken pictures of them.

Continuing the investigative reporter thing, I started to drive around the area of Billville Road hoping to spot the elusive chicken. I didn’t see it anywhere.

The next day, before work, I tried again, and on a second trip past a residence just west of the bank I saw the head of a chicken pop out of the flowers at the home. That’s how I met two of the best — and most unique — of friends.

Lilli McCullough, 7, and “Teeny” have been buddies since the chick pecked her way out of the egg last spring.

“She was the tiniest of the bunch,” Lilli said about the eight eggs the family tried to hatch last April for pets. “Teeny is very soft, and she likes to play.”

Heather, Lilli’s mom, says playing with Teeny helps Lilli get the low-impact exercise she needs as part of staying healthy and battling a rare medical disorder called Pompe Disease. The disease is a genetic mutation that doesn’t allow a patient’s body to properly break down glycogen, a stored form of sugar used for energy, ultimately creating a build up of lysosomal glycogen that damages the heart and skeletal tissue.

Lilli, who will have to get IV infusions every two-weeks for the rest of her life, has been through a lot since the diagnosis, but Heather says that Teeny is a nice distraction for her.

“They play together everyday,” Heather said. “They are best friends.”

Apparently the chicken likes to cuddle and stay close to Lilli — especially at night because Lilli says there’s something in the yard that scares Teeny. That’s why the chicken roosts on top of her kitchen play center on the back porch.

Heather says the two are inseparable, but Teeny likes the whole family, including the family dog, Zach, and the cat, Olaf.

“They protect Teeny, and they will play together around the yard,” Heather said. “It’s funny to watch them together.”

“Teeny is one unique chicken,” said Scott Smith, shaking his head and laughing about the recent misadventures Teeny has gotten herself into.

“We think Teeny’s been lonely and she’s searching for Goldie,” Heather said about chicken’s adventures outside of the yard. “They went everywhere together. Goldie, who belonged to Lilli’s brother Hudson, has been gone a couple of weeks now. Maybe someone found her (will read this) and they can be reunited.”

As for getting on top of the ATM, that’s a mystery to the family because they have never seen Teeny jump that high before.

“She’s very friendly, maybe someone picked her up and then put her up there,” Lilli said. “Teeny’s very curious about things. That’s why we’re building Teeny her own chicken coop, so she’s safe at night, and she won’t get into things.”

A lot of people don’t understand that reporters are not really supposed to be a part of the stories we work on — we’re not supposed to be the news, just cover it. But this time, I stumbled into a wonderful story about a wonderful family and a little chicken that not only can but does make the world a better place by bringing a smile to a little girl’s face.