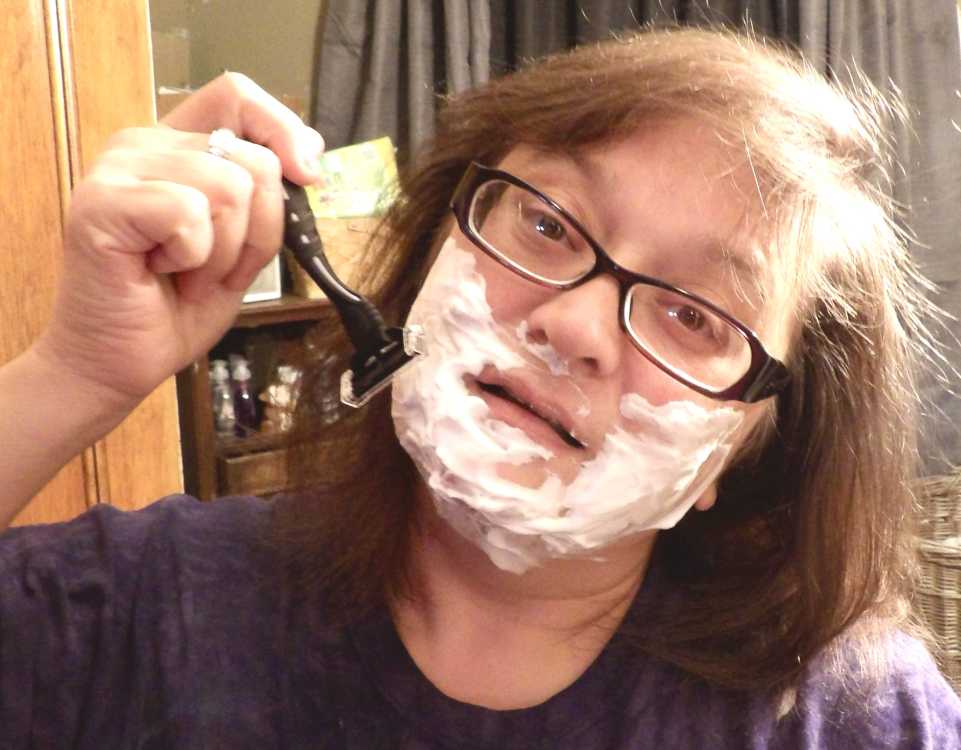 Anyone who knows me, knows I hate having my picture taken. But for this column, I asked my husband to take a picture of me with shaving cream on my face similar to the way the girl did on Facebook. I never spoke to her, don't know her, but I support her from a far. If you, dear reader, know of anyone being bullied - whether on Facebook or in real life - please intervene. Be the adult, the bigger person and step up for the right reasons when you see this kind of stuff happen. Everyone deserves to be treated with fairness and respect.

The great social experiment known as Facebook is quickly becoming one of the worst ways for people to interact with each other. The obscurity of the medium allows people to let go of the rules of polite behavior and go on tyrannical rants about all types of topics and often leads to bullying someone even for the simplest of things.

The other day a “Facebook friend” sent me a link showing a selfie of a young girl with shaving cream on her face and pretending to shave. (NOTE: This story comes from out of state, but that doesn’t alleviate the repulsiveness of the event.) It was a harmless picture, something that in the future could have been looked back upon with amusement, but, the number of people who took the time to post comments about sexual promiscuity, calling the girl a freak and saying that she was stupid (which were the mildest of the retorts posted by what are called “trolls” in the social media world) when she defended herself, changed the innocence of the Kodak moment.

“You should write about how horrible that is,” the person suggested.

However, the post became more sickening when I opened the comment threads when the girl tried to plead her case with a few of the haters tormenting her. The 15-year-old explained the photo was taken while she was shaving excess hair off her chin, which is where the freak comments came into play. She also admitted to shaving her arms, saying that “I’m sorry I have too much hair on my body.”

They told her she was “creepy,” “a weirdo” and “gross-tech.”

Now that, that really made me mad. A couple of days passed after I read the post, but when I went back to her page it was closed. She removed herself from what is supposed to be a place for social interaction.

The trolls won the war.

Wonder if they are celebrating their victory, or do they even care?

Is that the depth of depravity some members of society have fallen into? Is Facebook just one big dog pile of users, with everyone waiting for someone to show a clink in their armor — a moment of weakness — so that they can take their turn with cruel assaults?

There was no medical diagnosis offered in the post, or on the young girl’s personal page. But I couldn’t help but wonder what if that young lady had Polycystic Ovary Syndrome (PCOS), a disorder of the endocrine system that causes excessive hair growth, baldness, and weight gain?

The disorder can raise its ugly head as early as puberty.

In other cases female facial hair growth is the result of a hormonal imbalance, or a rare genetic disorder known as hypertrichosis or it can be caused by the use of anabolic steroids or other medications.

What ever the reason it happens to an individual, cultural pressure views a woman with a beard as a social stigma, an oddity, a cliche of the bygone days of the carnival sideshows.

If it sounds like I take this personal, I do.

I do not have a PCOS diagnosis, but I understand the shame.

A pumice stone was used to scrub my arms raw in an effort to get the thick black hair off my “monkey arms” as a preteen. A few years later, those black hairs started appearing on my face in various places. I would sit on top of the bathroom sink for an hour each night, my face up next to the mirror looking for hairs and pulling them out with tweezers until my dad would tell me to get out.

Think chemical treatments like Nair will work? Sure, but with a cost. I always looked like a lobster afterwards, too ashamed to admit why I looked like a self-imposed burn victim. Back to plucking with tweezers.

After I gave birth to my daughter, a mustache appeared almost overnight while I was in the hospital, which led to more time in front of the mirror. After the birth of my son, I found a lone hair under my chin a few months later. I couldn’t believe that a 5-inch strand had escaped my careful daily inspections. That’s when I discovered hairs can “pop up” and grow very quickly.

Do you know how much your personal body image takes a blow when you realize that can happen? As for me, I have yet to get over the image of the monster in the mirror and I’m in my 50s.

So, in support of the 15-year-old girl from Facebook, I admit to being a monkey-armed, hairy girl in my youth who is now a woman with a beard that has to be shaved every couple of days. Told my husband many times that if I don’t shave it, I could join ZZ Top in a couple of months.

My secret’s out, so pardon my beard.